Stinque
Home Latest Comments Log in
If it smells, we’re on it.
Stinque
Assholes, they do vex us.
Horrorshows 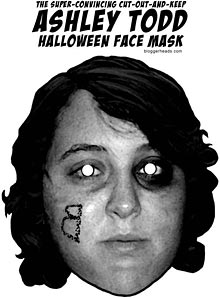 Our special election-night Open Thread/Triumph of the Shill is less than ninety minutes away, but already supporters of Silly Party Conservative Doug Hoffman are starting up their drinking game — a swig for every hoax they announce:

“Hoffman Poll Watcher Has Tires Slashed,” blared Red State, with photos of the truck and its flat tire. And Hoffman himself chimed in.

“We just had a report that one of our pollsters in Clinton County just had their tires slashed,” Hoffman said. “So I think the Democrats are doing everything they possibly can to steal this election away from the 23rd District.”

But the local cops disagree: “This was not a tire slashing,” said the police captain. “This was some guy who drove over a bottle and cut his tire.”

On the other hand, Hoffmaniacs are “yelling anti-choice stuff at voters,” says a Demrat on the scene. “Apparently, there’s some woman claiming to be a commissioner. Commissioner of what, I don’t know. She’s from Texas, I think, and she won’t leave.”

“We just had a report that one of our pollsters in Clinton County….”

Typical: Hoffman is trusting pollsters, when he should be trusting the people. THERE IS A WORLD OUTSIDE THE BELTWAY, HOFFMAN!!1!

DEVELOPING HARD: That racist Justice of the Peace down in Louisiana? Hanging up the skates. NBC reporting on the teevee just now that he has resigned.

OK Stinquers … I just clicked the link and spent a bit too much money for a Stinque hat. So get your gear on.

Put this on the fucking TV: Hoffman bit my ballsack after I paid him $5 to clean my asshole with his tongue in the parking lot of the Hannaford’s. Where’s the reporters when you need them?

@blogenfreude: I’m saving up for the travel mug. And I’m so glad nojo tastefully refrained from putting a subtitle on the thong.

@Mistress Cynica: Not that it didn’t cross my mind.