For Less Than $20, You Can Give the Murderous, Twisted Traitor Caligutard the Finger & Hot Lunch 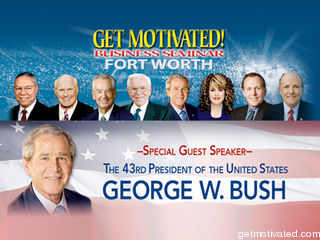 Just Imagine - A Whole Day of Howling Your 'Fuck-You's at Caligutard, just like Jesus wants!

When Caligutard was gagging on pretzels and Jeff Gannon in the White House, his handlers were careful to make sure the fragile, quaking dry drunk never encountered the raging legions of protesters that assembled everywhere he appeared to curse his every breath and condemn his depthless perfidy.

Now, as a private citizen, the murderous, traitorous Caligutard enjoys greatly reduced reality avoidance resources, exposing him to the full howling fury of a nation that hates him as no president has ever been reviled.

The cowardly slinking cur, as everyone expected, is venturing out to lap up whatever stray loot he can get his paws on, including an all-star review of failed, damaged fascists called Get Motivated!” business seminar featuring GOP reprobates Colin Powell and Rudy Giuliani that you, too, can attend to share your boiling hatred for Caligutard.

Yes, on Oct. 26, you can see and spew righteous abuse at the Caligutard in Ft. Worth, TX for only $19, a bargain at twice the price!

What say you, Stinquers? What would be the most appropriate way to let Caligutard feel the hate?

I’d flip the bird to everyone on the list except Terry Bradshaw.

@Tommmcatt is hunkered down in the trenches: Known in the trade as a hot lunch. So I’m told.

That’s it exactly: HOT LUNCHES FOR ALL OF THEM!!!!!

@Benedick: Can I get continuing education credit for hanging around here? I learn so much.

ftr
I think you are being unfair to Caligula.

@redmanlaw: I was told that by a working acquaintance who had been on the game for a period to fund his drug habit. Other gems I learned was to never be in a locked room and always keep one foot on the floor. I don’t know if he was especially paranoid when hustling or whether these are standard practice. We were merely in My Fair Lady together and one has to talk about something in the dressing room.

What more perfect icon of today’s business model is there than GWB? Take the owners’ money, incompetently run the enterprise into the ground, find somebody with deep pockets to bail it out, take that money and quit. To my knowledge his lifetime record of financial disaster is unmarred by anything remotely approaching a break even point.

Maybe he can tell the attendees how to get adopted into the Bush family.

you may need another baloon pic

@Dave H:
Or find your own Saudi Sugar Daddy.

@Dave H: Notice that he’s the only one of the speakers not to have a list of accomplishments attached to his name. I guess that his greatness is just self-evident to anyone dumb enough to attend this thing.

I’m betting there won’t be any Ivy League or Late Night Shots types in the audience. Sadly the people who will shell out the $19 for this joke are precisely the failing lower middle class individuals the GOP drags around by the nose with Fox News and talk radio while the Dems are trying to keep them alive with food stamps, unemployment benefits, welfare, public health care, Medicare and Social Security.

Is this the 9u11an1 gig? (I can’t bear to read…) They were in Harrisburg a month ago, sans Caligutard.

I can’t get past that woman’s hair. Oh. My. God. That’s bad even for Texas.

@Mistress Cynica: But hot for Oklahoma?
I propose we use some of the Amazon kickback Lucre to fund a plane ticket to DFW and cost of admission (and legal defense fund) for FlyingChainsaw to attend. What say you, Stinquers?