Stinque
Home Latest Comments Log in
If it smells, we’re on it.
Stinque
This is America.
Sociopaths

Deep in the Heart of Texas 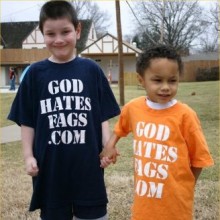 What could anyone possibly add?

Texas parents are complaining that a program to distribute free Gideon Bibles at schools may have backfired. So many Bibles were distributed to students in Plano and Frisco that students reportedly began to use them as weapons, sold them, or even uses the pages to roll joints. In one particularly disturbing account, a Jewish boy was attacked by Christian students throwing the bibles at him.

Who would Jesus throw Bibles at … oh wait.  Jesus was Jewish – Texans would chuck Bibles at Him.

The American Civil Liberties Union has issued a report on the abuse. Various complaints have been filed over the program by Gideons International. We previously followed one such controversy in Frisco where the violence has been reported, here.

Is it “National Coming Out Day” today? Speaking of the photo.

Wait.. I thought everybody rolled joints with Bible pages.

I’m thinking some of those little Bibles with the really thin pages might be a good substitute for ZigZags.

Sounds more like the Gideon Volunteers are acting kiddie diddlers and/or pushers.

“You know you want to. Try Revelations. You’ll feel groovey…”*

It’s Plano, what do you expect?

Let’s face it. God does hate fags. He also hates shrimp and cotton polyester mix. So, God hates Armani. Also DKNY. So, God hates NYC. God also hates Disney. (Don’t hate da Mause, God. He will hunt you down and kill you. Da Mause will make you beg for pity and move to Argentina. Da Mause will blight your progeny, aka Cain’n’Able. He will smite them with stoopidity) God quite likes Alabama. Also Arkansas. But not AZ on account of the gambling.

@Benedick: Shrimp? Don’t you mean prawns? You don’t have to dumb it down for us ….

The Acts of these Gideons have caused great Lamentations among those who sing the Song of Songs, “Don’t Bogart that Joint.”

I’d be totes cool with giving them Zombie Bibles, though.

@SanFranLefty: Hmmmmm…anyone interested in a quote on getting the Zombie Bible printed? I have an idea and a printer in mind…

@SanFranLefty: We have to get that damned thing finished.

@blogenfreude: I thought is was — I tried to log on a few months ago, but it looked like it was done.

You know, the Gideons usually hand out mini-Bibles (New Testament and Psalms only) at schools, which have flimsy, thin vinyl covers. Those things make pretty useless weapons. You fling that at someone in anger, and you’d get laughed at.

I’ve worked with a guy like Don, in that he lost his shit when the heat piled on him. A most useless turd of a boss for that reason alone. Ah, 1st season Don.

Letting Sal go? I happened to like the character of Sal despite his in-the-closet denial.

One thing that seemed so odd about Mad Men is their timing. Last year, it was Betty’s dad the Psychogeezer clone losing his shit at the same time his real life counter part was doing the same. Now this weekend being the Gay Right’s March and the predatory Southern man on the prowl (shall we call him Lindsey or Andre?) trying to bully his way into Sal’s pants as talk of civil rights in the background.

@ManchuCandidate: Drifting in and out with an oncoming cold, I watched a JFK documentary with video from the weekend he was killed. No voiceover or interpretation, just raw reporting as it happened over the weekend. I knew what was going on having just finished Manchester’s Death of a President. Now watching Rocket J Squirrels v. JNOVs in the NLDS. Somehow my Broncos beat New England to go 5-0. I am amazed. Gotta plug away on a couple of projects as well tonight.

Jamie Sommers is an island

@ManchuCandidate: I’m watching it now. I can’t fucking believe they fired Sal. Fucking asshole client.
I think the only person I have left to root for is Carla.

I still have a couple of those Gideon bibles we got in grade school back in the sixties. These are somewhere in this house in a box with a bunch of other junk.
I think they gave them out in the fifth grade. There was a sense of excitement to get them. For me getting any freebie was exciting. I particularly liked the plastic fire helmets they gave out for fire safety week. My brothers got copies of the Mobil Oil Company History of Texas cartoons. They quit giving them out before it was my turn. I suppose that’s why I hold on to the Gideons.
I went to grade school in Texas and all I got was this lousy bible.

@ManchuCandidate: @Jamie Sommers is an island: Noooooo! I don’t get to see it until I download the itunes episode tonight. I adore Sal. Why would they get rid of the best characters? Hope he’s back in some other capacity.

@blogenfreude: OMG! I still have one of those little bibles, the size of a deck of cards, that some loon gave me back at UF 29 fucking years ago, with the thin paper and green vinyl cover, and you are right, its just the right size for rolling joints, and the pages are nice and thin, too. What a great idea, rather than reading and memorizing the whole bible, like Tom Sawyer was doing, a few verses at a time, I should set out to smoke the whole bible, a few verses at a time!

@blogenfreude: God hates everything which creepeth upon its belly, dude, and he is against anything in the sea that does not have the scales and the fins. And damn you if you eat anything that does not cheweth the cud.

This is now reminding me of an old Dave Barry, in which he has a french person objecting to a dish of crayfish as follows: Regard! This fish of the cray has not the fins, it has not the scales.

Which is all the funnier acause “crayfish” is just a misspelling and mispronunciation of “ecrevisse.”

Jamie Sommers is an island