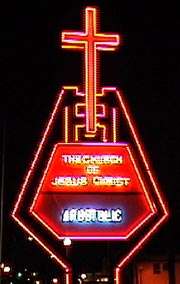 “Pastors have a right to speak about biblical truths from the pulpit without fear of punishment. No one should be able to use the government to intimidate pastors into giving up their constitutional rights.”

That would be Erik Stanley of something called the Alliance Defense Fund, which sponsored Pulpit Freedom Sunday yesterday. And who could disagree with him? No reason preachers shouldn’t enjoy the same free-speech rights as the rest of us.

For that matter, no reason preachers shouldn’t also enjoy the same taxation rights. You give up your tax exemptions and render unto Caesar, and we’ll fully support your judgment about how best to render unto God.

And there’s the rub. They want it both ways.

At issue is the “Johnson Amendment”, added to the tax code by LBJ in 1954 — which may have had more to do with local opposition to his reelection than high principle. But whatever Johnson’s motives, the principle has seemed reasonable: You can have your nonprofit status — just keep your nose out of elections.

Unsurprisingly, the meddling preachers on the dole don’t see it that way:

Stanley explained that, contrary to the misunderstandings of many, tax-exempt status is not a “gift” or “subsidy” from the government.

Count among the misinformed the Supreme Court, which ruled that “Congress has not violated [an organization’s] First Amendment rights by declining to subsidize its First Amendment activities.” Count as well IRS Commissioner Mark Everson, who explained that in 2006. “We can’t afford to have our charitable and religious institutions undermined by politics,” he said.

And Everson was a Bush appointee.

But perhaps we’re looking at this the wrong way. Perhaps we should grab ourselves a mail-order ministry, convert this operation into the Stinque Church of What’s Happening Now, and start collecting.

My guess is that the ministers want it both ways because otherwise they’d have to explain the expenses (mistresses, diapers, crotchless wetsuits, rent boys, etc) not only to the IRS, but also their suck… um, flock while shilling for the GOP.

BTW, even god didn’t want man to have it their way. He/She’s not Burger King.

I hope more wingnut churches join this trend – the IRS could use the money.

They’re already sucking up tax dollars through the Ministry of Fuck Me Jesus that Obama didn’t have the fucking guts to shoot and throw off a bridge. What next? Immunity from prosecution for armed robbery? “Hi, Jesus needs your cash, asshole. Empty the vault or fucking die. This is a federally protected robbery by a certified church, immunized under CFR 33.432.”

A local gay-friendly Episcopal church got in trouble with the IRS when somebody in the pulpit mentioned that Jesus would not approve of the war in Iraq. It took them a lot of coin to make that problem go away.

A note to fans of mathematical logic, and you know who you are: check out the story in today’s NYT on the graphic novel Logicomix. I just ordered a copy from the Stinque Linque to Amazon.com.

“The way to make a million dollars is to start a religion.”

@Capt Howdy: I’ve missed a bet here. People tell me that I have a very soothing voice. I could have parlayed that into a religion that involved tithing, Thai hookers etc. Instead, I’m sitting around hoping that the Dow hits 10,000 so that my life savings, instead of swirling around the toilet bowl, can peek over the rim.

@Dodgerblue: I majored in accounting, so I’ll be happy to “do the books,” if you get my drift.