Stinque
Home Latest Comments Log in
If it smells, we’re on it.
Stinque
This is America.
Manufactured Goods

Smug Not, Lest Ye Be Smugged 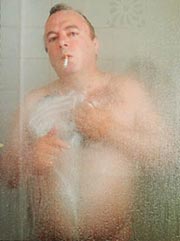 In the new Atlantic, Christopher Hitchens is tired of all the adoration received by America’s Favorite Fake Newscaster:

Immediately following the death of Walter Cronkite, Time magazine took an online poll to determine who was now “America’s most trusted newscaster.” Seven percent of those responding named Katie Couric. Nineteen percent nominated Charles Gibson. Twenty-nine percent went for Brian Williams. But the clear winner, garnering 44 percent, was Jon Stewart of The Daily Show. Either I missed it, or the poll failed to specify, in that wonderfully reassuring way that polls purport to do, what had been its “margin of error.”

Or it was, y’know, an online poll, which is 100% Accurate of visitors clicking buttons. Which is the first indication that Hitch is phoning this one in from the club.

Most of Hitch’s cocktail-napkin opus is actually devoted to bashing Al Franken, despite Stewart being pitched on the magazine’s cover and in the lede. But when he eventually gets around to Jon, he doesn’t take the trouble to watch the show. Instead, he grabs a copy of Stewart’s Naked Pictures of Famous People — written while Craig Kilborn was still hosting the Daily Show — and uses that to render judgment upon everything Stewart has done in the ten years hence.

Thanks for the image. Now to look for that bottle of brain bleach…

Awwwwww. Seems Hitch is still sore from the beating he took the last time he was on TDS.

@blogenfreude: He did, but this is just Lazy Hack Syndrome. I wouldn’t mind a withering attack on Stewart — comedic snobbery is a grand tradition — but this kind of casual spitballing should be beneath Hitch’s station. And in print, you don’t even get to enjoy the accent.

@nojo: If you chance to like… was sufficient for my inner voice to go into Instant Brit mode.

@blogenfreude: Was he something other than a boorish drunk before 9/11? I had never heard of him until I – ahem – chanced upon Gawker Ltd.

There is no good writer out there more maddening than Hitchens. It’s not because of losing his mind post-9/11 so much as it is than we can tell when he’s mailing it in. (Although I do get tired of his railing against the “feminist left” for not being loud enough against fundamentalist Islam, because as a Brit and immigrant, he seems to forget a basic thing about us: some of us want to take care of our own house first, and Christians in the religious right are a bit closer to home these days.)

It’s pretty clear that this piece is all pique over being taken down by Stewart, because nowhere does it actually prove the point the headline (probably written by an editor, but still) it’s promised.

@nojo: And in print, you don’t even get to enjoy the accent. You mean the publican from Chislehurst sound?

Damn Limeys. Come here and take our jobs . Sneer at decent folk who can’t get there possessive cases right. Assholes. I say, ship them back where they came from.

@Benedick: You mean the publican from Chislehurst sound?

Precisely. We can detect accents by region, but you Brits have them mapped by the block.

@nojo: Ted Heath lost an election because he couldn’t say “out”.

This warmonger needs to be kicked to death with all the other neocon scum.

There goes lunch. Thanks, nojo!

Uhhh, that sure doesn’t comport with my experience from my D.C. days.

@SanFranLefty:
It’s not like DC is filled with incredibly insecure guys with Napoleon complexes (like any other world capitol–I have friends who live in Ottawa.)

Pretty much everything Hitchens has written since 9/11 has been an apologia (not an apology mind you) for his pro-Iraq-war stance. If he’s decided to try and take down Stewart it’s because Stewart is such a prominent, common sense critic of the Iraq war (Stewart is no sentimental pacifist of the sort Hitchens makes easy sport of skewering. He supported the Afghan invasion intervention, for instance… indeed, like many of us, thought Iraq was a distratcion from the real mission in Afghanistan). Alas, for poor Hitchens, history has pretty well rendered judgment on who was right and who was wrong re: Iraq and Hitchens pretty much comes up the loser there.

Sorry, not pretty much.

Hitch’s writings in the run-up to the Iraq war were a collection of idiocy and stupidity, all wrapped up in false information and glazed with cheetos dust (Hitch knows his audience).

The columns were dumb. Disjointed. Pig-ignorant. And other bad things.

I don’t really think Hitch lost it on 9/11, but whatever remained of his brain after the years of alcoholism did get lost around that time.

You know, I am pretty foreigner-friendly. Helps to be, being surrounded by 1.4 billion of ’em. But when it comes to Limey dogs like Sully and Hitch that involve in our politics, dammit, I turn into a raging ferriner-phobe.

And finally, can people stop referring to all UK citizens as ‘Brits’?? The Scots are not British!! And if you make that mistake in Glasgow you might well get pummeled for it!

Get it straights, peoples!!

@RZ: In the year I’ve been paying attention to Sully, he’s been very well-behaved, as well as very useful in tracking the neocon chattering classes.

And we’ll stop calling them “Brits” after they make up their fucking minds about the whole Brit/Scot/Welsh/Irish/English/Isles/Great Britain/UK thing. Seriously, folks, you’ve had almost a thousand years to figure it out.

@RZ: The Scots most certainly are British. What they aren’t is English. Foreigners (*cough*Americans*cough*) tend to call us all ‘Brits’ when they really mean ‘English’. When I refer to Limeys as being beneath contempt I refer specifically to the English: whose long career of cultural imperialism was first practiced against their neighbors the Welsh (destruction of native Nobility, installation of English milords, first-born son is always Prince of Wales, etc), the Scots (destruction of highland clans, mass starvation to form great estates, installation of English Nobility usurping Scots’ titles, forced emigration, etc), and the Irish (see above, installation of English Nobility as The Ascendancy, mass starvation, forced emigration, etc). All of which practice stood them in good stead as they made their way around the globe carving out the empire on which the sun never set. Until it did.

It goes thusly: England (this sceptered isle, etc), Scotland, Wales, Ireland; all separate nations; not to be confused – and only Sassenachs eat fish and chips; ‘Britain’ = England, Scotland and Wales; contiguous countries; ‘Great Britain’, those nations plus Ireland across the sea (now that means Northern Ireland); the ‘United Kingdom’ (official title nowadays) forenamed nations plus Isle of Man (oldest parliament), the Channel Islands (tax haven, whoopee!), and whatever else could be grabbed.

The long story of how the English exerted control through class, manifested most pungently through accent, is a long and dismal tale brilliantly summarized by G.B.Shaw (Irish) in his masterwork Pygmalion the many glories of which I shall go into at a later date. BTW: I count myself to be a Scot.

As for Sully and the other one: clever grammar-school boys pretending to be old etonians. Polemicists without a pole. Both representing most of what I hate about Limeys; and note, they are English. As English as murder mysteries and damp wallpaper peeling off the walls in run-down boarding houses in Manchester.

@nojo: See above note about what the names are. They do all mean different things.

I wish I could unsee that pic of Hitchens