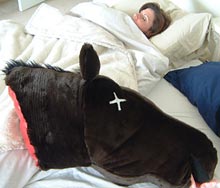 Our Oz correspondent recommends the following two stories, with the proviso that you don’t confuse them.

In the first story, Australian jockeys are upset over new rules that limit the amount of pain and suffering encouragement they can provide their dogmeat noble steeds down the stretch. Jockey union spokesmidget Paul Innes explains:

Even worse is the introduction of a padded whip, which isn’t nearly as fun.

Which brings us to the second story:

A British researcher is suggesting that couples should sleep in separate beds to avoid snoring, kicking and duvet-hogging partners.

Bed-sharing can ruin your health and your marriage [AussieBC, both via CheapBoy]

A real badass jockey would just strap himself head-aft to the horse’s belly and bite its genitals in the home stretch. What kind of assholes are running Australia?

A British researcher is suggesting that couples should sleep in separate beds to avoid snoring, kicking and duvet-hogging partners.

OK, here’s my “duvet” anecdote: A couple of years ago my wife and I went to a fancy bedding and curtain store to buy… well, bedding and curtains. At one point I asked the sales lady if they sold a duvet that matched the curtains my wife was contemplating. But here’s the thing: I’d never heard of a duvet before, but looking at the word “duvet” in the store catalog I could tell that it was French. However, I didn’t want to sound pretentious and pronounce it the Frenchie way (sounds like touché) and instead pronounced it the anglicized way (rhymes with “love it”) as in: “Do you have a dove-it that matches the curtains?” And all the while, in my mind I’m seeing this image of the sales girl responding “Actually, it’s pronounced duvet (sounds like touché).” And guess what… that’s exactly what she did… pissed me off so much I was tempted to continue our conversation in french “Ah, bon! Donc, est-ce que vouz avez un duvet qui semble les rideaux?” But I didn’t. ’cause in the end, I’m basically a loser.

Any way, that’s my “duvet” story. I hope you liked it.

Blipped over to WND to see what teh crazee was up to, and found this:

Anybody else think they could change that argument to “Adult dog more rational than WND troobelievers”?

The (m)Ann Coulter bit is funny too, if only for things like this:

14) National health care will not cover abortions or illegal immigrants.

This appeared in an earlier installment of “Liberal Lies About Health Care,” but I keep seeing Democrats like Howard Dean and Rep. Jan Schakowsky on TV angrily shouting that these are despicable lies – which, in itself, constitutes proof that it’s all true.

So does that mean Ann has finally come out as a tranny? Because she denies THAT rumor like crazy. The logic here is classic Cold War, “Team B” type stuff that means that no amount of denial, even proof to the contrary, will ever convince the believer.

@al2o3cr:
oh my, you have given me the will to go back to work!
i will only represent 4 legged creatures!

SAW, stop it stop it!!!
i just checked myself out of hadassa hospital “against medical advice”
i am in terrible pain, and cannot be laughing like this!

i had a procedure that i had 20 years ago in new jersey. the atlantic city medical center saw me in the emergency room, and kicked me out on my ass and threw a fw pecocet at me…and charged my insurance company eleventy million and a half dollars. i was in the hospital here–for free–for 2 days and had to fight my way out. israeli’s are suppossed to be so tough?
pussies.

loved your duvet story CB, and now i’m going into a self induced coma and wake up in eastern standard time and speaking english!!!

Sad to say I’m one of those people who should sleep in separate beds. I snore (especially during allergy season and when sick) and sometimes loud.

An ex used to complain about that till one night I woke up in the middle of the night to hear her snore. Made me laugh. Her not so much though.

I admit that I’m not a fan of cold feet put on my warm legs.

Those beasts weigh 2,000 pounds, you think whispering sweet nothings in their ear is gonna inspire them to run fast?

Anyone horrified by the whipping clearly does not know what spurs are for, or if that is obvious enough, no way they know just how a bit works.

@ManchuCandidate: Get a CPAP, its great.

@ManchuCandidate: I wish our damn chow would sleep in a separate bed,

@redmanlaw:
I come from a family of snorers. Unfortunately, our (late) family dog also snored.

When I lived with my parents, I once came back from a night out to find my parents and dog snoring in a 3 part harmony in front of the TV.

@redmanlaw:
heh, i feel ya…a beloved BORZOI takes up most of our bed!
he is bigger than both of us…
and we like it that way. he trained us.

@baked: And there’s probably some nights where you *need* that gorgeous Borzoi keeping you away from R.B.

@ManchuCandidate: Both of my parents snored in that decibel range that approaches that of a jet on takeoff, and they had apnea, too, and would stop breathing, audibly choke, for an eternity. Creepy. The good part was, I could set off fireworks in the living room, nothing would rouse them.