Stinque
Home Latest Comments Log in
If it smells, we’re on it.
Stinque
Cassandra was right.
Wingnuttery 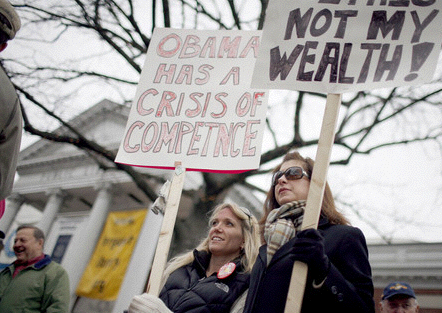 This might be the stupidest thing ever posted on the internet.  The Politico:

Nor are Democrats strangers to having their crazy uncles take center stage. During the run-up to the Iraq war, for example, Reps. Jim McDermott (D-Wash.), Mike Thompson (D-Calif.) and David Bonior (D-Mich.) famously flew to Baghdad, where McDermott asserted that he believed the president would “mislead the American public” to justify the war. The trip made it a cakewalk for critics to describe the Democratic Party as chockablock with traitorous radicals.

I think the article link is wrong – did you mean this one?

Of course, the “crazy uncles” in the quote above happened to be RIGHT. (although even they wouldn’t have believed at the time that people were being TORTURED to try to collect evidence to justify the war)

@al2o3cr: Fixed – thanks. Much stupid over there to choose from.

@al2o3cr: Yes, they were right, hence the statement “false equivalence.”

In the end, analogy is the essence of intelligence. Taking in and spitting out information is not intelligence. Intelligence consists in taking the information you have, and spotting appropriate analogies which allow you top extrapolate from the observed to the not yet observed and make accurate predictions. It is the ability to properly categorize different bits of information within the same categorical boxes (determining that they are different examples of the same broader phenomenon, for example) so that you can produce a descriptive system in which to place facts, a logical system that allows you to deduce missing facts or future events.

So yes, when someone says that the democrats who correctly saw the Iraq war as wrong and stupid are the equivalent to the mouth-breathing, drooling racist retards who watch or listen to Glenn Beck, thats a false equivalence, but what it means on a more profound level is that the utterer of this statement is a fucking moron.

@al2o3cr: Being right is irrelevant. All that matters is being Right.

@nojo: From the standpoint of the Right, both groups are embarrasing to the mainstream Right, the dems because they were right, the pigfuckers because they exceed the level of fucktardery and racism that the mainstream Right believes it appropriate to display in public, so by that analysis, its a correct equivalence. Internally logical, I should say, still stupid as shit when measured against external reality. And yes, reality has a liberal bias.

Probably appropriate to mention here that the sole purpose of Politico is to generate traffic. Period. It’s in their business plan — they talk about “capturing the morning” and “capturing the afternoon”.

So while on occasion Politico may actually break news, it’s purely by accident.

This is going to set the wingnuts off.

@blogenfreude:
Of course because the Wingnuts are all about life.

@rptrcub: Jesus H. on a pogo stick. Sounds like what happened in Fort Worth a couple of months ago. Hope you go and dance defiantly and stick it (so to speak) to the Man.

@SanFranLefty: You left me an easy opening there. Srsly, though, I’m thinking some neighborhood biddy complained, said there were drugs there, then when the cops didn’t find any, they charged the employees and the dancers for not having an adult establishment license (even though they were wearing underwear).

At this point, our wisest move would be to consult Propecia, noted crack ho, who boldly proposes the solutions to our problems. (Hint: They mostly involve the sweet rock).