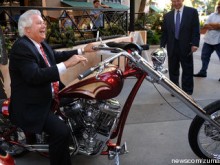 Mike Duvall now seems to be denying having affairs with the two women he was caught bragging about sleeping with.

Assemblyman Duvall Denies Reports that He Had Affair

I want to make it clear that my decision to resign is in no way an admission that I had an affair or affairs. My offense was engaging in inappropriate story-telling and I regret my language and choice of words. The resulting media coverage was proving to be an unneeded distraction to my colleagues and I resigned in the hope that my decision would allow them to return to the business of the state.

He throws in details on her underwear, her age, and her birthday and expects to be taken seriously?  Seriously?

Duvall Denies “Reports That He Had an Affair” [TPM]

I was just walking along, and there was this lobbyist, and I fell in.

Mike Duvall’s check to Joe Wilson is in the mail.

This has “statement made on the advice of my divorce lawyer” written all over it.

@Prommie: “And we’re talking slippery slope if you know what I mean, and I think you do.”

@nojo: Can we call him by his full name, Addison Gonorrhea or whatever it was that SFL dug up? COTD for her, by the way.

@Serolf Divad: more like “statement made on the advice of my lawyer to avoid legal prosecution.” Implicit sex for votes, even in California, is still a no-no.

I don’t think anyone will actually buy this.

@The Nabisco Quiver are Go!: it’s Addison Graves. He just wanted to be “Joe” so he wasn’t seen as one of dem elitists with a fancy name.

@Signal to Noise: But he gave that diseased name to one of his sons.

@Just Jamie: SarPal would have gone with “Clapper”

@Signal to Noise: I’m not the expert here, but Addison Graves reeks of Southern aristocracy.

@nojo: Speaking of which, what was response-man’s name, Boustanyi? He tried to buy himself a British title, recently, he wanted to be real aristocracy.

@nojo: And guess who is a member of Sons of Confederate Veterans?

@blogenfreude: And Addison Graves Wilson got a quarter million from pharmaceutical and insurance interests.

@Prommie: Boustany is yesterday’s second-luckiest man. His response wasn’t Jindalicious, but in the absence of anything else to mock, he would have received a lot more attention.

@blogenfreude: No surprise there, but what’s Clint Eastwood’s excuse?

Here’s a really effective response: “I did not have sexual relations* with that woman.”

@blogenfreude: Like the old Charlie Daniels song, “the South is gonna do it again, and again”- and tell everybody about it.

* Depending on the definition of such activities. OAC, closed course, professional driver. Your mileage may vary.

The group’s history described on the Wikipedia page is particularly humorous; there’s a definite “People’s Front of Judea” feel to the internal squabbles over the organization’s purpose. Who would have thought that an organization dedicated to the memory of a rebellion would have difficulties maintaining internal coherence?

@nojo: It’s the traditional Southern last-names-of-relatives-with-the-most-money moniker.
@blogenfreude: Of course he is. In a state that still flies the stars & bars on the Capitol grounds? If you’re descended from one of our glorious boys in gray, you let people know.
@Prommie: Funniest of all would be if he was just stalking these women and fantasizing about them, and then bragging to his fraternity brothers fellow members about imaginary sex. What could possibly be more pathetic?

@Mistress Cynica: I should start a Sons of the Pueblo Revolt org.

@redmanlaw: Full disclosure: My grandmother was a member of United Daughters of the Confederacy , and always refused to sing the Battle Hymn of the Republic.

@Mistress Cynica: I’ve had relatives in the SCV, who at one time tried to get me to join. No. Way.

@Mistress Cynica: My grandfather fought in the IRA. This was back in the day, mind you, even before 1916, so he was a freedom fighter, not a tare-ist.

@Prommie. cyn, cubbie: Isn’t it funny how we, and probably other stinquees, have revolt in our blood?

@The Nabisco Quiver are Go!: See?

My Italian great uncle was at a Chicago speakeasy when the Feds raided it one night. That’s the best I got.

@The Nabisco Quiver are Go!: I’ll see your D.A.R. and raise you a First Families of Virginia. Of course, RML trumps all of us Eurotrash. As Bill Murray said in Stripes, “Our ancestors were kicked out of every decent country in the world.”

@Mistress Cynica: Jamie, too. Also, I’m a member of one of the four original clans of the Navajo, the Ki yaa’áanii or “The Towering House People” on my mother’s side, which were part of the settlement of the Chaco Canyon area.

And so here I sit in the beginning of my 10th year at this firm listening to sports talk radio, posting away and reviewing a contract for behaviorial health services for a tribal client. Tonight we go to the kickoff of the Santa Fe Fiestas for Mrs RML’s people to celebrate the “reconquest” of Santa Fe in 1693 after our successful revolt of 1680. I prefer to think that we let the Spanish back in after they promised to reform their previous repressive occupation, which is why we still have our land and religion.

@Mistress Cynica: Same century, but whereas you folks were monarchist lovers of Old Dominion, my forebears were original Quakers. Oatmeal is in my blood, y’all.

@redmanlaw: /bows to the originals/

@redmanlaw: Hey, kinda like Mrs. RML’s peeps, my Irish great-grandpa was a moonshiner in Oklahoma until he killed a guy in a bar fight and fled to the Pacific Northwest. Otherwise, all my ancestors were growing potatoes in Scotland and Ireland or fleeing pogroms in Poland and Germany. Not sure how much revolution versus basic survival was going on.

Way back on my maternal grandma’s side are French aristocrat types who settled in Louisiana and started a sugar plantation, which I’m only too happy to report is underwater (and had been for a long time before Katrina).

@Prommie: As you probably know, you can still see bullet holes from the Rebellion at the Dublin Post Office.

@Mistress Cynica: This is certainly true of my family: “Our ancestors were kicked out of every decent country in the world.”