Don’t Worry: Fox News is on the Case 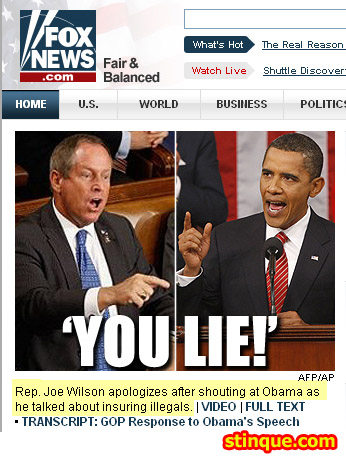 The not-at-all-misleading caption reads: “Joe Wilson apologizes after shouting at Obama as he talked about insuring illegals.” Not that it makes any difference, of course, but Barack Obama’s exact words were:

“There are also those who claim that our reform efforts would insure illegal immigrants… this too is false.”

Now, maybe I’m just a little dense here, but would it not have been more accurate to say that Obama was talking about not insuring illegals? It’s a fine distinction, to be sure, that which holds between doing something and not doing something. Consider, for instance, the practically trivial difference between “No, I have not been drinking” and “Why yes, officer, as a matter of fact, I have been drinking… heavily” or “there are not dead hookers buried in his back yard” and “there are dead hookers buried in his back yard.” But then again, maybe I’m just reading too much into it. After all, it’s not like Fox News is known for pushing misleading GOP propaganda as news, or anything.

This from the same network that, for a full half hour after Obama spoke to the kids, did not say ONE WORD about it. Not a graphic, not on the ticker, no pundits, NOTHING.

It’s not like Faux News viewers are capable of nuance, Serolf. Shit, they probably can’t even define, spell, or pronounce the word nuance.

The only thing that surprises me is that there isn’t a “(D)” after Wilson’s name.

Cub mama, resident of America’s largest insane asylum, says: “If I was that disrespectful when someone else was speaking, whether it was the President or the dog catcher, your Grandmother would have beat my tail (and I mean now at the tender age of 53).”

@blogenfreude: I was looking for the (D), I’m sure that they said California Assemblyman Dribble Duvall, representing Nixon’s grave and surrounding Yorba Linda, was a D.

I’d be disappointed in Faux otherwise.

I’m eagerly awaiting today’s WH press release about how Obama’s hoping to work in a bipartisan fashion with the people who’re unsubtley ordering their constituents to assassinate him.

Duvall Update: Heidi says the sloppy sex did not happen.

@blogenfreude: Well, of course she is denying it. She’s about to lose her job, be subject to ethics investigations, and of course, he’s gross. She’ll never work or get laid again in Excremento if she were to admit it.

Have you ever been to Sacramento? I consider it a privilege not to work or have been laid (lain?) there.

@Tommmcatt Floats:
Are you kidding? I’m in that damn town entirely way too much. Was there a week ago, will be there next week, and the week after that. Luckily they’re almost always day trips, even if I have to leave my house at 4 am and get back at 10 pm, I do not want to stay there.

You know how San Franciscans used to make fun of Chico for it’s lack of culture?

It is a baked rock in the middle of a field of dead grass.

Oh honey, no. This makes me want to weep.

@Just Jamie: Awesome in how badly it fails.

The back of that jacket looks like folded bat wings or something.

@Just Jamie: Oooh, I didn’t realize the jacket was pleated on the back. I still maintain the position that the color looks good on her.

I liked Vickie’s suit, both fit and color.

@SanFranLefty: I too hold out in favor of the color on her, I liked it. The pleats, meh not so much.

The girl can’t win though, can she? Shows guns or gams, and the wingnuts are all over her with the “dignity” issue.

Speaking of which, Lindsey (“call me Lynn”) Graham calls Hopey uppity, demands he step and fetch it.

Also, a couple my friends went to the Britney Spears concert last night, and one of them was asked to go on stage. His Facebook profile pic is now of her descending from the ceiling above him as he sits in a chair on stage. I guess she gave him a fake lap dance. I am sure he at least has crabs, and she is probably now pregnant with his gayby. He also said he thinks she was lip syncing, to which I say “NOOOOOOOOOOOOOOO!”.

@Just Jamie: Dear lord. Where to begin? Mamie Eisenhower pretty much sums it up. And that cheap-looking, horrible brooch. Michelle, darling, I’m going to share with you a little trick I use: Whenever you’re considering an outfit, ask yourself if you can see Jacqueline Kennedy wearing it. If not, give it a pass. I hope you got the name of Vicki Kennedy’s couturier. She looked amazing, especially given what she’s been through.

@homofascist: He thinks she was lip syncing? Is he new to the planet?

@Mistress Cynica: And the bow. Don’t forget the bow.

And the skirt pleats that start below the hips. So, so wrong.
Whoever allowed her to walk out of the White House like that should be fired immediately.

Do you y’alls know the Girugameshguy? Pair him up with Wilson. :-D

Is Mr Obama a weakling ?? – A Sissy to be beaten up by the Republican Bullies – Perhaps not – Obama Analysis – Psychoanalysis of Politics

Many people complain that Mr Obama seems very weak before his enemies, that he seems very detached from Reality, that he lacks certain strength of Franklin Delano Roosevelt, or Lyndon Baines Johnson … These two mentioned presidents were the main architects of Social Legislation in U. S. Twentieth Century History.

They had many powerful enemies in their times ( Republicans and Rich Corporations ) but they showed Great Strength and Force of Character to succeed in Legislation.

Perhaps the people that fear that Mr Obama is a Little Sissy to be beaten up by the Republican Bullies are wrong.

To analyze the personality of Mr Obama, we have first to understand the he is half “Black” and half “White” … we should paint ourselves with these two colors before wearing Obama’s shoes.

The condition of being the “Weird”, “Foreigner”, “Stranger” and “Other” in a Hawaian School and later in the U. S. Continent has to have an impact on Obama’s Soul. This has to produce a reserved and interior personality, more introverted than extroverted, in order to survive or to improve his standing in every situation.

We can not expect Mr Obama to be a buoyant Teddy Roosevelt, or a Franklin Roosevlet from Money and Society Nobility …. Or a Big Texan like Lyndon Johnson. … Obama comes from the World of Underdogs.

That requires “Survival by Shrewdness”, “Quiet endurance of harsh conditions”, etc …. be quiet and avoid useless revenge for small nuissances.

So Obama is an occult and hidden personality, but “Filth that doesn’t kill you makes you stronger”, so Obama may have become stronger with all the Dirt and Filth of Society.

Every new king, ruler or president has to be very prudent when he reaches the throne.

It is reported that Caligula and Nero were welcomed as very Human, Civilized, Kind and Polite, during the first years of their Emperorships.

Obama is not a Caligula or Nero, not even a Tiberius. Obama has little in common with Julius Caesar ( a scion of the Julian Nobility ) but Obama may have an ounce of Augustus ( Diplomacy, Politics ) a gram of Trajan ( Great Builder ) and a pound of Claudius ( Shrewdenss, Intellect, Understanding )

“Felicitor Augusto, melior Traiano” was a ritual formula to greet the Roman Emperors when they arrived to a new city. “Be luckier than Augustus and better than Trajan”…

Be more happy and lucky that Augustus and build more good things for the Empire than Trajan.

Mr Obama may have hidden strengths and reserves of Psychological Strength.

He may be “Quiet “Waters” : in many countries there are rivers and lakes of incredible danger, because they may have hidden currents, whirls, spins, fast rotations that are not apparent in the surface.

So the expression “Quiet Waters” may mean “Hidden Dangers”, and as applied to a person, it may mean that under a Quiet and Tranquil personality there are hidden currents of energy and strength to face enemies.

That Mr Obama seems very “Republican” in Afghanistan and other policies, may be buying time to gain strength or to study a situation. ( Perhaps he is not a strong believer in some of his temporary policies )….

Mr Obama is Professorial, Rational, Reasonable, Intelligent, Shrewd, Calculator, Cold, Historian, Bookish and Librarian Like, but he may have a hidden maelstrom of energy and strength.

And are we conserving consonants these days?

@nojo: But not caps, apparently.

@vicenteduq: Oooh, the World of Underdog is an awesome place to come from!

Those one hundred plus Republicans that voted in favor of Joe Wilson in the House of Representatives are in solidarity with Bastard and Scoundrel Behaviour.

Think of this : each time that the President of the USA speaks to a joint session of Congress, then a group of scoundrels can yell and shout whatever obscenities and bastardies. Will that be the behaviour for the Future ??

It is a better idea to condemn this Filth and Dirt of Republican Bullies. I have heard few voices of condemnation coming from that Party.

Joe Wilson was presented as a Hero in Fox News. I immediately changed the station.

And Yes !! ,… .. all those Republican votes for Joe Wilson inside the House of Representatives are sheer Hyperdistilled Racism.