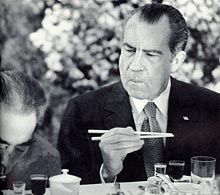 It’s all coming into focus now. When Socialist-for-Life Barack Obama indoctrinates America’s schoolchildren on Tuesday, he’ll hold up a giant Queen of Diamonds and set off the national tyranny everyone’s been warning about:

According to the Global Times English-language edition, the national flag of the communist People’s Republic of China on Sept. 20 will be raised for the first time on the White House’s south lawn — a secured area seldom available for public events — in recognition of the Chinese anniversary.

Or, if you prefer your hysteria in screaming email style:

The plan, reported by several English-language Chinese media outlets, has raised concern among those who are working to guard the United States from outside influences that could be threats.

Why it took China so long to take possession of its largest debtor is unclear. Experts guess we’re not buying our mandated quota of sneakers, electronics, and lead-enhanced toothpaste, or perhaps rather than establish a new world reserve currency, our Capitalist Commie Overlords prefer to just squat on the existing one. Suspicions have also been aroused that Beijing is making a pre-emptive bid for the Super Bowl halftime show.

Plans to fly the Confederate flag at the Veterans Day parade in Homestead, Florida, remain unchanged.

I dunno. “RED” China is the biggest US America creditor. Seems fair. But then why celebrate “rebels” against progress?

Not really unrelated:
2/3 the way through the Coldest Winter and reading about the idijits of the China Lobby (including Henry Luce founder of Time) and the even bigger idijits of the MidWest and South (the ancestors of WND) who screamed about who Lost China and then used that and the threat of communism to scare the Dems.

Not much has changed really.

nojo, darling, I come to my desk full of Hope to begin my work day and get clobbered with this. Thank you.

Hi, manchu. We’re always up first. Or have the most morning time to waste.

@Benedick:
Always an early riser except for those rare occasions I’m out till 5am. Even as a kid, I’d get up at 7am like clockwork.

Truth is, I enjoy wasting time in the mornings. Get some reading done. Surf for a while. It’s peaceful till the neighbours let out their rat dog around 9am. Then I read up on how to use a Mk79 Grenade Launcher and fantasize on taking out the rat dog’s humans.

(Newser Summary) – The Washington Redskins have relented and told a court to drop a $66,000 judgment against a grandmother who defaulted on a contract to buy season tickets, the Washington Post reports. Pat Hill, a 72-year-old real-estate agent, couldn’t afford to make payments after the housing market crash and is among 125 fans the Redskins have pursued lawsuits against over the last 5 years for failing to honor season ticket contracts.

A lawyer for the Redskins denied that the decision was anything to to with a Post story this week exposing the team’s lawsuits against fans.

The Chinese have repo’d the US? Fine. I say, cut a deal with them, give them the Red states, and walk away.

I’ve never understood the Southern crackers’ love of the Rebel flag – combine it with their frequent affection for swastikas, and you start to think they love losers…

@Dodgerblue:
Yup. If there is a way to go back in time and thump the shit out of MacArthur’s G-2 (intel officer) Charles Willoughby, I would. That useless cockroach (he would have been a contard today and probably a welcome member of the Bush Admin) helped kill a lot of soldiers thanks to his suppression of intel about Chinese troop in the winter of 1950.

One of my uncles served in the 6th ROK division (I think) when it reached the Yalu. He was ordered back home on leave to visit his wife who just gave birth to a son. A few days later, the 6th Division was pretty much destroyed when the Chinese surprised them and most if not all of his friends did not come back.

@ManchuCandidate: A buddy of mine who was in the Marines in VietNam said that the Korean troops there were feared by the NVA and Viet Cong more than any other.

@Dodgerblue: I spent two months working with Vietnamese highland refugees inside the Cambodian border in 2001. When the elders learned that I was working in South Korea they told me the same thing.

Back OT/ My brother brought me back a “red” Chinese flag when he went there on a school trip in 79 or so. We used to piss my mom off and run it up the flagpole every once in awhile. Maybe I’ll dig it out and hang it out one of our windows on the 20th for giggles….

@ManchuCandidate: My late uncle was on one of the destroyers that did the bombardment for the Inchon invasion.

@redmanlaw:
Bombardment missions on tin cans was always a tough job (close enough to get shot at, the tides at Inchon were nasty.)

@Dodgerblue:
@The Nabisco Quiver are Go!:
Three reasons for that I think.

1) Being Asian in an Asian land (takes one to know one) meant that the VC and ARVN couldn’t pull tricks on the ROKs like they did on the US.
2) The ROK military is pretty ruthless, vicious even. No quarter given or expected.

Many of my uncles and cousins spent time there. A few didn’t come back.

3) The first time a ROK unit entered a VC controlled village, a group of ROK SF troops with black belts in Taekwondo simply tore apart the village with their hands and feet.