Stinque
Home Latest Comments Log in
If it smells, we’re on it.
Stinque
This is America.
Obamacare and Cannibal Benefits

The First Finger is Fired 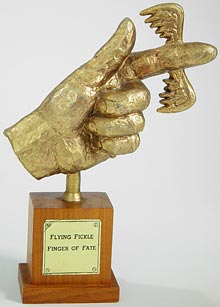 With all those firearms at town halls, we have to admit an indecent pleasure that the latest report of violence is very old school:

A 65-year-old man had his finger bitten off Wednesday evening at a health care rally in Thousand Oaks, according to the Ventura County Sheriff’s Department…

A witness from the scene says a man was walking through the anti-reform group to get to the pro-reform side when he got into an altercation with the 65-year-old, who opposes health care reform.

The 65-year-old was apparently aggressive and hit the other man, who then retaliated by biting off his attacker’s pinky, according to Karoli from DrumsnWhistles, who attended the rally.

But all’s well that ends well: Doctors reattached the pinky.* The anti-reformer had Medicare.

Man’s Finger Bitten Off in Scuffle at Health Care Rally [KTLA, via TPM]

Update: Oops, he lost half a pinky after all. We’re undecided whether that remains good news.

This little piggy went to townhall.

This little piggy had some healthcare

This little piggy had none.

Ha ha that is f’n great! Comment of the day!

By the way I thought it finally came out that it was re-attached, at least TPM said they super double checked and…

By the way, if you want to know all the secrets then just charge Gonzo. He, finally, has figured out that he will not be protected when the shit hits the fan.

That boy is ready to sing like a birdy.