Lord, give me strength — 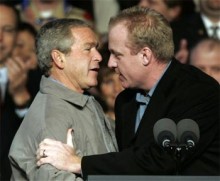 Add another name to the growing list of pols and would-be pols eyeing a run for Edward M. Kennedy’s Senate seat: former Red Sox ace Curt Schilling.  That’s right, Mr. Bloody Sock himself [said] that he has been “contacted” about a possible Senate run and has not ruled it out.

“I’m not going to divulge the discussions, but I’ve been contacted by people whose opinion I give credence to and listen to, and I listened,” Schilling said.  Asked whether he would run, Schilling said, “As of today, probably not. […] That’s a pretty big deal, from a commitment standpoint, not just for me but for my family.”

…Schilling added to his comments with a statement he posted on his blog.  “I do have some interest in the possibility… That being said to get to there, from where I am today, many many things would have to align themselves for that to truly happen. I am not going to comment further on the matter since at this point it would be speculation on top of speculation….

“I don’t have a really good filter…. Actually my first press conference could probably be my last as someone on the political scene, which probably wouldn’t be a bad thing.”

Immunizing himself from a public image meltdown, a la Sarah Plain and Dumb, or (it must be said) Caroline Kennedy.  I see what he did there.

Re the first press conference: especially if someone asks if he was in a steroid rage when he threw the broken bat fragment at Mike Piazza.

Dodgerblue: You were going for Roger Clemens there, methinks.

Don’t worry, the Sox aren’t scheduled to win anything for another 83 years.

@chicago bureau: Right. But oppo research has already begun to prove the sock was not actually bloody.

It’s not like ball players have women throwing themselves at them or anything. The Shill’s probably pure of mind soul and body.