Mommy 1.0 collects a bunch of Twitter douchbags, and I pick the worst one: Erick Erickson. 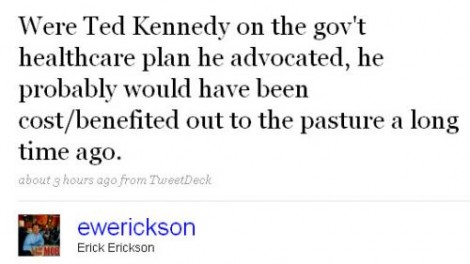 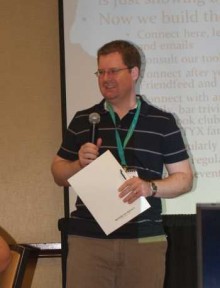 Erick, in case you didn’t know, founded the website RedState.  Among other things, he twitted (tweetered?) the following when David Souter retired:

Eric Erickson [sic]: The nation loses the only goat f*&king child molester to ever serve on the Supreme Court in David Souter’s retirement.

At some point soon, it will happen. It’ll be over an innocuous issue. But the rage is building. It’s not a partisan issue. […]Were I in Washington State, I’d be cleaning my gun right about now waiting to protect my property from the coming riots or the government apparatchiks coming to enforce nonsensical legislation.

Erick’s likely too much of a wuss to actually do anything, but he sure cheers on his rabid readers.  Sort of a dumber Glenn Beck.

@homofascist: Darling! So nice to see you out and about!

Well, well, well, Missy. Back from your wanderings.

@homofascist: Sorry to hear that.

Well, as the song says, “Sometimes ‘scary’ is exciting”. I hope nothing too difficult to deal with, though.

Are you getting laid? That’s the important thing.

This guy looks like he uses “cleaning my gun” as a frequent explanation for chapped palms and stained shorts.

That pisses me off but good.

E. Erickson, despite his significant learning disability and native stupidity, knows very well that the meme that seniors will be killed to pay for ‘Obamacare’ is false.

But he still shills it.

Rat f**ker. Not like that wasn’t obvious yesterday. But still.

Ye shall pay, you dishonest shill.

We will ensure it. Punk.

You will not believe the latest from the RNC.

@blogenfreude: In the annals of push-polls, this will be accorded the highest honor.

@Prommie: You know I love you, Prommie, but spelling is not your forte.

Merriam-Webster, I know, lame, but still:

Though labelled an alternate, “benefitted” at least follows the common pattern for adding “ed” to a word ending in a short vowel sound and an unvoiced stop.

That guy is Erickson? Pfft. That guy would hide in his pantry and wet his pants if a riot occurred within 5 miles of his property.

@Jamie Sommers:
I read his name as “Ewick” like he had a lisp or something.

Where the hell have YOU been, missy? Partying it up with Homofascist?

@Tommmcatt Floats:
Of course she’s getting laid. Go on FB one of these days and check out the new friend. He’s cute. Not Asian though, so not your type.

@Prommie: You can hardly sic someone with the least preferred spelling. No one said American English made any sense.

@SanFranLefty: Rome. Got back Tuesday and am trying to recover from the 3 inch squares of doom generally known as cobblestones. Fuckin’ things nearly killed me.

@Jamie Sommers: How? Were people throwing them at you?

@FlyingChainSaw: Naw, just from walking on them for hours and hours. They’re all uneven and wonky. I don’t know how those Roman women walked around on three inch heels. I got terrible blisters after the first day in sneakers.

Doesn’t Ewick wowwy about being pulled out of his mom’s basement and beaten bloody for being a dishonest, nasty idiot? Does he realize how lucky he is that all the sociopathy and psychopathy is on the right?
Wotta ugly, nasty tool.

@SanFranLefty:
When I first looked at it, I saw “eww, ick.”

@Jamie Sommers: Trying to get sympathy for having been in Rome will not work, missy, cobblestones or no cobblestones.

@Jamie Sommers: I hiked 22 hours over three days in moccasin boots with a pack in the mountains this week. My calves are just getting back to normal. Cold and rainy for two days. You could see your breath at 2 pm at 11,000 ft., where we had to throw up a tarp and build a fire with wet wood on the second day. Sunrise above timberline coming up out of Blue Lake on the third day is a highlight of my year, though.

@redmanlaw: Why do I want to sing “I got a tombstone hand and a graveyard mind (I’m turned 21 and I don’t mind dyin’)…” after reading your first sentence? Sounds awesome.

ADD: @Jamie Sommers: My best buy in Rome? Well, actually two, both from Romani: a cheap umbrella in the middle of a summer downpour, and a stainless steel butane lighter with a top curved like the Pope’s miter (is that the word for his headgear?). In Vatican City, natch.

@FlyingChainSaw: The basic route has been in place since “time immemorial”, as they say, but the tribal wilderness department under the War Chief’s office sometimes moves sections through the forest in order to prevent erosion or overuse. Up on top, 12,000 ft and above, it’s all grass and granite populated by marmots, so there’s really nothing to bushwhack through. I camped lakeside in the spruce at 11,000 ft on Tuesday night. “This is our church,” my dad used to tell me when he could still go with us.

@The Nabisco Quiver: I am still in awe of the experience.

@redmanlaw: Are the marmots friendly? Can you pet them?

@FlyingChainSaw: Never tried. The dogs try to chase them and they vanish into the rocks and pop up several yards away. It’s like real life whack-a-mole. The dogs never learn that they’ll never catch those fancy prairie dogs in their big fur coats.