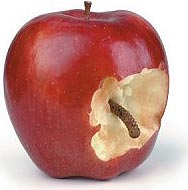 Now that everyone’s out of town, the CIA torture report has finally been released, and Eric Holder will apparently appoint John Durham, “a career Justice Department prosecutor from Connecticut” who’s also looking into the missing torture tapes, to hang the Bad Apples by their seeds:

Durham’s mandate, the sources added, will be relatively narrow: to look at whether there is enough evidence to launch a full-scale criminal investigation of current and former CIA personnel who may have broken the law in their dealings with detainees.

Remember, “I was only following orders” is no defense. Unless you were. Or unless you gave them.

But as far as we know none of their organs failed. /John Yoo

@blogenfreude: Abu Ghraib all over again, and alas, no surprise by now.

But hey, Holder no longer need worry about the Clinton pardons staining his record. Those will just be a footnote to the war crimes he’s abetting now.

Oops, forgot the mantra: “We need to compromise on [fill in the blank] so we can compromise healthcare reform.”

@nojo: Well, since the L.A. Coroner ruled Michael Jackson’s death a homicide, the teabaggers aren’t going to be on teevee screaming the crazy about Death Panels for a couple of weeks.

Ooh, what other declining pop star could we off to keep those numbnuts off the teevee? Is Whitney Houston still alive?

@SanFranLefty: MJ is truly the gift that keeps on giving.

John Durham’s “doctor” just called. He said that John’s about to die from a totally normal, non-suspicious case of “food poisoning,” and that John’s soon-to-be discovered, devout religious beliefs require him to be cremated before dawn, most likely in an exploding ambulance.

@chicago bureau: Flipping back and forth between Jets preseason and Top Gear – TG is all stuff I’ve seen on YouTube. Meh.

Here is the Orwellian doublespeak: “to look at whether there is enough evidence to launch a full-scale criminal investigation of current and former CIA personnel who may have broken the law in their dealings with detainees.”

Seems to me that ALL of them who engaged in the waterboarding and other forms of torture which the Bush admin’s whore lawyers like Yoo said were legal, but really were not legal, broke the law in their dealings with detainees.

What he is really saying is he is going to look into whether anyone went beyond the “legal” (by Bush whore lawyer standards) illegality.

He has no intention of investigating “illegal” conduct, he is only going to investigate UNAUTHORIZED illegal conduct.

What its really about is finding some sacrificial scapegoats to throw on the fire, to distract from the fact that they have no intention of going after the worse criminals who authorized, and created the legal fictions justifying the authorization, the rampant illegal torture they engaged in.

@Promnight: If end game isn’t little kids swinging from Cheney’s feet as he hangs from the gallows on the Capitol Mall, then it won’t be justice Holder delivers.

@FlyingChainSaw: I want a Cheney-Gonzales-Shrub pinata at the Vietnam Memorial. Seems fitting.

@SanFranLefty: Sure. What should we use for pinata sticks? RPGs?

@nojo: Seems that Black Eagle is proving he was a really bad poker player. In this case, he’s going to allow Holder to do enough headline grabbing to muck up health care reform, but not enough to really wash the scum off the streets of our nation’s soul.