Sociopath of the Day 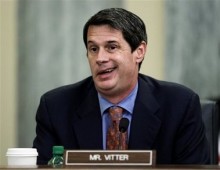 Had to invent a new category for this one:

Sen. David Vitter (R-LA) isn’t content to fight attempts at government-run health care here — he wants to destroy it in other countries, too.

The central Louisiana newspaper The Town Talk reports that Vitter was asked at a town hall meeting about the fact that he opposes government health care, but supports re-importing prescription drugs from, as a constituent said, “countries that have socialized medicine.” Vitter has campaigned in the past on re-importing drugs from Canada.

“My ultimate goal,” Vitter explained, “is to use that (re-importation) to cause that (pricing) system to collapse.”

Who does this asshole think he is? Manchu, please send some Mounties to DC to cockpunch this hypocrtical whorefucker.

Vitter: My Goal on Drug Reimportation is to Destroy Other Countries’ Health Care Systems [TPM]

*no, not really shocked.

@SanFranLefty: Nobody could have predicted, eh?

And a handy dandy chart that tracks approval ratings of Shrub against the changing terror alert levels.

We don’t need Canada’s drugs, when we can get drugs from WalMart for $4.00!
Walmart’s $4 Drugs Coming From Indian Company Whose Products Have Been Banned In US and Canada

And we were all terrible and unreasonable for suggesting such a thing back then, remember?

We need a wayback machine.

Passing thought: What would happen if The Jungle was published today?

@blogenfreude:
I think $4.00 for thirty tabs of chalk and roach feces is pretty damn reasonable.

I realize that the psychopaths, robber barons and compulsive liars who are busy ruining our country are Very Important Bizniss, but perhaps could we get a regular post about someone or something that’s done something good as we watch the nation swirl down the drain?

It hasn’t all gone to shit, right?

My (remaining) sanity thanks you ; )

(Answer: Yes actually, once Obama was totally corrupted about 3 minutes after he entered the WH, it all went to shit. Thank you, Rahm Emanuel, strategic genius.)

That Rahm Emanuel is one evil, scary sumbitch. I saw a photo of him reading a book to terrified-looking children this week, and all I could think from their expressions was:

Perhaps Barry simply went mad when he read the Presidential Book of Secrets.

@Original Andrew: “…perhaps could we get a regular post about someone or something that’s done something good as we watch the nation swirl down the drain?”

Here. Look at pictures of puppies raised by prisoners to be companion pets for returning war veterans.

Shit! Even my puppy story becomes a downer.

Try this one: World’s Most Crooked Street transformed into giant Candyland gameboard, UCSF Children’s Hospital patients invited to play on it.

@SanFranLefty: Or there’s this.

@Original Andrew: Butterstick II is about a mile to the left of me, but I’m just not up to Panda Blogging.

Tha U2 concert in streaming audio is making document review and dealing with a stressed-out partner, clients, and opposing counsel a LOT easier today. They sound great, although I wish Brian Eno was there singing backup and adding his ethereal keyboard parts.

Drumming on” City of Blinding Lights” a little more aggressive now in the intro and verse before chorus. Makes you want to throw your arms around the world.

@blogenfreude: Reminds me of the night porcupines invaded my family’s camp when were were on a horse packing trip as a kid. They ate our soap and gnawed the handles of our fishing rods.

Update from my friend in the West Wing:

The new version of “I’ll Go Crazy If I Don’t Go Crazy Tonight” is smokin’ – like a club-influenced tune from “Pop”. Also: Bono added a fragment of “when two tribes go to war . . . “

What a cool idea–Lombard Street has never looked better!

Butt seriously, there simply must be someone in our political world who’s not a total–what is it Pedo calls them?– a chingacabra?

Speaking of sociopaths, Fortune has a sprawling, glowing profile of investment management company BlackRock, who’re on pace to manage 3 TRILLION with a “T” in assets this year.

@Original Andrew: That’s the old beef with media: Nobody ever prints good news. And when they do, nobody reads it.

But hey, we did the train-station dance some time back, and more recently RomeGirl found something nice that I, um, have totally forgotten.

Oh, and there’s my old Orygun Congresscritter Pete DeFazio, whom I mentioned some months ago after he did a segment with Rachel. He’s still cool.

It’s true. Most good news is boring as hell.

Yet there must be some story out there, like maybe about boy who grows up with a single mother, gets into some great schools, works with and cares about his community, gets elected to office and then–against all odds–later becomes President of these here United States. Of course he then proceeds to severely fuck over everyone who voted for him after he’s reprogrammed by former, Machiavellian Clintonites, so this one ain’t gotta happy ending per se, but maybe there’s a similar guy or gal out there?

@nojo: I used to tell people that it’s not news when the sun comes up in the morning – or when things go the way they are supposed to. I used to hate doing “cute girl with a dog” stories with a passion.

@redmanlaw: Working for a community every-other-day rag, I was informed very quickly that my job was to get names on the page. Subscribers like to see themselves in print.

It was probably that moment that the 18-month Countdown to Freedom began.

Vitter really needs to have his head nailed to the floor to make it easier to shit in his mouth.

@Tommmcatt Floats: I’ll Lend you mine

@redmanlaw: I LOVED the story about the coach with strippers. It has everything: high-minded blather; Jeebus – or at least the praying to; the ‘but he’s such a great guy, how could he do this to us’? aspect; the saving of the childrens aspect; the Sport aspect; the winning of games hence confusion caused by only good guys win but good guys don’t hire strippers for teen boys in motels aspect; and some truly outstanding comments. Thank you for bringing some south-west style sunshine into my morning, big guy.

Correction: Vitter needs to have his eyes torn out and be skull fucked by the population of a supermax before the sockets are stuffed with salt in the name of Jesus Christ.

@nojo: Michael Moore is just releasing the fourth of what are, essentially, cinema documentary variations on The Jungle. What happens is, the facts are simply denied, and the author denounced as fat.

@Promnight: If only he tuned things back to 7 or 8 instead of being 11 at all times, he would be Upton Sinclair for the 21st Century.

@SanFranLefty: My memory of The Jungle is that it was at 12, most of the time. Different times, different perceptions. People now on both sides, though more so the right, seem to be so ideologically blinded that they regard any criticism as false and excessive, if thats their bias to so believe. I defended Clinton, the runningdog.