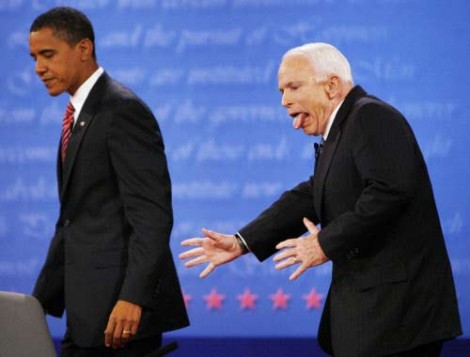 Screaming and stomping his widdle feet:

Sen. John McCain (R-AZ), who was of course President Obama’s Republican rival in the 2008 general election, has announced that he will vote against Sonia Sotomayor, Obama’s first nominee to the Supreme Court.

In his floor statement, McCain harshly criticized Sotomayor as an activist judge who does not respect the legislative branch, the written law, or the will of the people — and who is now trying to hide from that record ….

This is very good news for Rudy Giuliani.

Steve in Manhattan
4:00 pm • Monday • August 3, 2009
comment »
Choose Your Delusion
A Pawn in their Game Orlygasm
13 Comments
Signal to Noise

Remember, kids: an activist judge is just someone who doesn’t agree with you.

@Signal to Noise: Or left of Scalia.

So what’s happening in AZ that Psychogeezer needs to pander?

He and Kyl can do that because the Hispanics in this state don’t vote anywhere close to their numbers.

Based on that criteria, isn’t Alberto Gonzales an activist judge?

@nojo: Jamie’s right; he’s free to do as he pleases because his seat is safe as any Senator’s can be. He’s not pandering. He actually means it.

“She’s also uppity,” McCain continued, “and wouldn’t clean even one of my houses, even after I promised her a fair wage. She may have a sister or a cousin who can do it though, then I might change my vote.”

@Signal to Noise: Not necessarily free to do as he pleases, just no threat in a general. The wingers in AZ have never liked him and they’ve gained the upper hand in the state party in the past couple of years. There is talk of a primary challenger next year which could be a problem since the way he ran the presidential campaign could hurt his chances of getting independents to turn out to vote for him. In the end, I’m guessing he’ll win the primary handily but there’s no need to stoke fires on something where his vote won’t really make a difference anyhow.

tj/Gawker closing early today, server problems. Too bad. I had some good snark for Deadspin on Plaxico Burris, a player of high caliber indicted on weapons charges today.

…from the state, and the man, who voted down MLK Day.

@RomeGirl: Global warming will finish off Arizona. They are screwed.

@redmanlaw: A guy who came this close [] to shooting his own nuts off.

Every now and then McCain makes a move to show that he’s just a pissed off asshole, still sore that he’ll never be president. Actually… come to think of it, he does it all the time now.