Has Missing GOP Nevada Governor Gone Pestorkabout With Love of His Life, Too? 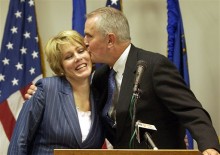 Jim Gibbons, right, kisses his wife Dawn, during a news conference in Las Vegas in a pathetic attempt at exhibiting fidelity at a fucking press conference. Asshole.

The Associated Press is reporting that Nevada Gov. Jim Gibbons, famed for a Playboy Playmate pestorkorama that inspired him to divorce his wife, has escaped from the state and is somewhere in an undisclosed location, leaving the sad sack Lt. Gov. to lead Nevada to ruin while he apparently delights in the glories of the poon tang.

Interim press secretary Gail Powell said Thursday the Republican governor was out of the state, and that the Defense Department asked that details of his trip not be made public.

It’s that time of year, apparently, when Jesufascist, family-values GOP governors go pestorkabout and run wild with their mistresses.  Unlike the dog-faced doofus Mark Sanford, however, Gibbons was a legendary pussy hound, reviled by his wife as a wanton, cackling womanizer.

In her response to the Governor filing suit for divorce filed last year, Dawn Gibbons told of his affairs with two women, including a former Playboy magazine playmate who revealed her luscious poon tang to the world before offering it to the married family values governor – and one women whom he send gazzillions of text mails, no doubt detailing the savage and unChristian fornication they would enjoy together.

Staffers are busily planting stories in the press in an effort to place Gibbons on a secret mission to Afghanistan to bolster the spirits of 800 Nevada reservists stationed there who no doubt want to dismember and eat the livers of the GOP fucktards like Gibbons who sent them to their deaths for profit and entertainment while they collect government checks and benefits and pestork Playboy playmates.

So, Stinquers what are the odds this piece of shit will show up on TV in tears about the love of his life? Are those odds better or lower than the odds of him being exposed as having an affair with a camel in Afghanistan? Should Gibbons resign and stay in Afghanistan with his lover?

He is also known for beating on innocent women that he mistakes for prostitutes, of course, his Vegas constituents forgave that, after all, who among them has not made the same mistake?

“Pestork” has just been submitted to Urban Dictionary, thusly:

Engage in the physical act of love, especially when the actor is a prominent politician and is doing so notwithstanding marriage to another.

Gov. Sanford could have been a contender for the presidency, were it not for his decision to repeatedly pestork that Argentine.

@chicago bureau: I was going to look for evidence of “pestork” in the wild, but a New Zealand crafts site is distracting me.

(Update: Most offsite references link to the Zombie Bible…)

nojo: I think that “pestork” is truly a Stinque Production. In the same way that the Republican Party is a Mark Goodson Television Production.

But while “pestork” is indeed an FCS Special, it really merits broader usage. Alas, colloquial language is a fickle beast.

@nojo: Oh, I merely invoked the word as a substitute for more headline-hostile alternatives. The word itself was used regularly by contemporaries in another life and was, in fact, of such common usage that friends would employ it in the relyricization of songs such as ‘Copacabana’. I’d be reluctant to give the word a political connotation as in common usage it was a non-politcal and secular word. ‘Pestorkabout’ is freshly minted explicitly in the context of a political leader going missing for the purposes of pestorking a mistress, however, and therefore can be defined with this connotation while maintaining etymological integrity.

How about “Pestork raving mad?”