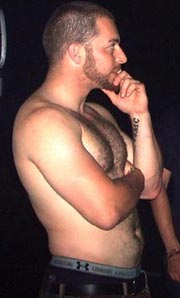 Beefcake Iraq anti-war vet and deep-fried Libertarian Adam Kokesh has been a declared Congressional candidate for only a week, and already he’s embroiled in controversy.

For not being Libertarian enough.

Make no mistake, Kokesh knows his Galt from his Roark. And he proudly displays an endorsement that proudly references libtard strokefest V for Vendetta.

But Kokesh, who hasn’t yet declared a party affiliation, is also happy to pick up the endorsement of something called the Modern Whig Party.

You remember the Whigs. Abe Lincoln’s pals, before everyone deserted them. Or as the anonymous leader of the Congregation for the Doctrine of the Libertarian Faith considers them, fucking statists:

I cannot fathom why anyone would be happy to be endorsed by the Whig Party. The 1800s Whig Party was the predecessor to modern corporatism: guys like Lincoln and Clay basically thought that the government existed to provide money to their cronies. It morphed into the Republican Party, which was the party of Lincoln, of course. Then, as now, the Republican Party was truly the War Party: Lincoln started a war that killed over 600,000 Americans (not counting the civilian deaths) and ignored the U.S. Constitution at virtually every opportunity.

Whew. That’s enough to give us vapors.

And that’s why the Libertarian movement will inevitably deteriorate into factions, a Judean Paultard Front here, a Paultard Front of Judea there. They’re faster to excommunicate than Catholics, and there’s no room for forgiveness.

His signs are all over Santa Fe.

Could somebody call him and tell him to put his shirt on before Lindsay Graham gets all bent out of shape?

@redmanlaw: Yeah, too bad Peggy was lying about Palin nine months ago.

I had no idea Abe was such a war-mongering tool of the corporate interests. And when I hear “Whig” I think Charles James Fox, not Lincoln.

I’d hit that so hard, Michael Jackson would sit up and say “what the hell was that?!”

With mind, body and spirit in tip-top shape, what’s not to like about the passionate, articulate Adam Kokesh? He writes his own speeches and doesn’t need a teleprompter; during on-the-spot interviews, it’s obvious he knows what he’s talking about and that his IQ is up in the stratosphere.

Then again, if you’re pro-war/same old sh*t, enjoy double-speak and need a sleazy, imbecilic politician to look up to, then I’d say Palin or name-any-other-tard would be your man.

Adam Kokesh, Rand Paul, Peter Schiff, and B.J. Lawson are all endorsed by Ron Paul and are the wave of hope for the future, regardless of whatever party they feel would be the best vehicle to getting the message of liberty out.

@blakmira: Considering that all I’ve got so far is a beefcake photo and a comment on his website from an anonymous crank, he’s off to a good start — and hanging in much better than Cindy Sheehan.