Thomas Friedman Kindly Requests That You Die for Him 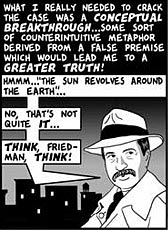 We have rare occasion to read globetrotting poseur Thomas Friedman, and after his Sunday Times column, we’re discovering in ourselves an unwelcome inclination to scrape his chubby face across the nearest concrete edifice:

But now, having voted with their ballots, Iranians who want a change will have to vote again with their bodies. A regime like Iran’s can only be brought down or changed if enough Iranians vote as they did in 1979 — in the street. That is what the regime fears most, because then it either has to shoot its own people or cede power.

Friedman of course is not alone in rooting from the sidelines while ignoring the game, but this is the first example we’ve seen of well-meaning bloodlust among the chattering class. Certainly Mir Hossein Mousavi, in whose name the protests were conducted, isn’t insisting that his followers offer themselves as cannon fodder. Nor is Grand Ayatollah Hossein Ali Montazeri, who has called for three days of mourning starting Wednesday — which some are reading as an implicit call for a national strike, itself another echo of tactics from 1979.

In which case, everyone would stay safe at home. Or relatively safe, given how Basiji jackals are terrorizing neighborhoods at night.

If the protesters themselves decide that sacrifice is their only means to achieve their goal — which a week ago was merely to have their votes counted honestly — then we wholly support them. But that’s not our call to make. Not from the comfort of a San Diego apartment. And certainly not from the cushy penthouse of the Times Op-Ed page.

i read “the world is flat” so i know exactly what it’s like to have your head crushed by the basiji.

@baked: I didn’t read The World is Flat so I know what it’s like to have an election stolen from me.

I love how everyone is suddenly an expert on all things Iranian. This comes on the heels of their Iraq expertise on Sunday TV which turned out so well.

The Moustache of Understanding – I am so sick and tired of this warmongering douchebag.

It gets worse. A living crime against humanity if there ever was one, Wolfowitz, yes, Wolfowitz, is giving Obama advice in diplomacy with Iran.

Please, someone, pour a truckload of cement down his throat and set him in a sunny spot to dry.

@Benedick: I love how everyone is suddenly an expert on all things Iranian. I spent a glorious Sunday with an Iranian-American friend and his 78 y.o. mother, the latter of whom had the (mis)fortune of being outside of the country when the elections took place. They were refugees from Iran in the US, but years after the ’79 revolution. My friend’s uncles were imprisoned for backing the wrong liberal horse among the mullahs and – get this – had Ahmadinejad as a jailer.

They both chuckle at the so-called pundits on the news for just not getting it. But they do in fact think things are going south much quicker than expected. One of the first things she said to me when I asked her what she thought was “I just hope we don’t end up another failed state like Afghanistan or Iraq”.

Oh and BTW, she lurvs Hopey, says all Iranians do.

@blogenfreude: Having read that I have to go and lie down.

@Nabisco: As an immigrant myself I’m amazed at how little of the olde country any of the pundits understand. What they do is project the US onto Britain and criticize the ways in which it doesn’t measure up to their expectations. Imagine the gulf that opens when the country in question is Iran or Iraq.

As you-know-who put it: He jests at scars that never felt a wound.

I read The World Is Flat and was amazed that he could stretch one relatively simple idea into so many pages of blather.

@Benedick: And sometimes Trevors, but not always.

@blogenfreude: To go up to a colleague, put your arm about his or her shoulders, give them a bit of a hug and tell them they’re fired is known in London theatrical circles as getting Trevved. Named for Trevor Nunn who is, I’m told, prone to that sort of thing.

@Dodgerblue: I couldn’t finish it; a couple of chapters in and I realized I had already picked up on his main point. Fortunately it was a library book.

“So you clogged my toilet?” I asked. I was, I confess, a bit annoyed, but also fascinated by the way Friedman’s trip to the restroom had brought back what I imagined to be his usual élan.

I can’t make it through the whole thing, but I heartily applaud the author.

@blogenfreude: Strong debate within Stinque HQ last night whether to run with that or Tom Tomorrow. In the end, This Modern World was easier to crop.

@Benedick: This comes on the heels of their Iraq expertise on Sunday TV which turned out so well.

Wouldn’t it be nice if their boilerplate introductions reflected that? “Paul Wolfowitz, former president of the World Bank, has been tragically wrong on every issue he’s spoken about or orchestrated. He’s here today to continue his unbroken losing streak.”

@nojo:
That piece was brilliant.

This is old, but it’s the absolute definitive review of W.i.F

@fupduk: Wonderful review, by someone who can actually read and speak. Here’s my fav line: “If its literary peculiarities could somehow be removed from the equation, The World Is Flat would appear as no more than an unusually long pamphlet replete with the kind of plug-filled, free-trader leg-humping that passes for thought in this country.”