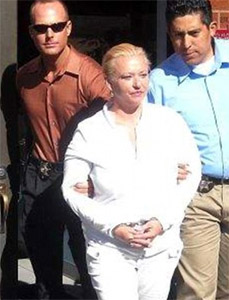 Two weeks ago we introduced you to Scott Roeder, the murderer of Kansas abortion provider Dr. George Tiller. At the time we noted that certain details of Roeder’s personal life seemed to fit in to a depressing pattern among right-wing extremists. Like so many others before him who have resorted to violence in the name of a grand, if hateful, ideology, Roder’s personal life was marked by failure. In personal and financial matters Roeder was a wreck, unable to maintain a marriage or hold a steady job.

Now we get word that another right-wing loser has gone on an ideologically inspired murdering spree.  Shawna Forde was a prominent member of the anti-immigrant Minuteman vigilante group that patrols the U.S. – Mexican border. She was also a member of FAIR, the Federation For American Immigration reform. Recently, after befriending Jim Gilchrist, founder of the Minutemen vigilante patrol, Forde founded her own branch of that organization called the Minutemen American Defense group and came up with a novel method for funding that group’s activities: she and her associates would rob suspected drug dealers at gunpoint and use the proceeds to keep on keepin’ on It seemed like a great idea at the time, no doubt. After all, what could possibly go wrong with a plan that reads like the plot t0 a Guy Ritchie film?

What went wrong, of course, was murder. On the night of May 30 of this year, Forde and two of her associates broke into the home of an Arizona man named Raul Flores, whom they suspected of being a drug dealer. They planned to rob him, but instead ended up murdering the man, as well as his nine year old daughter, Brisenia. Flores’ wife, who fired upon the intruders with a weapon of her own, was gravely wounded.

As for Shawna Forde, she sits in a Pima County jail, wondering why all of her previous associates in the radical anti-immigrant community are scrambling as fast at they can to disassociate themselves from her, and no doubt contemplating the train wreck she has made of her already sorry life. And yes, like Roder who was a nobody before he found a purpose in the violent anti-abortion movement, like Holocaust Museum shooter James von Braun who was a frustrated artist before finding his voice in the Holocast denial movement, Forde’s own biography reveals a history of failure and petty criminality that seemed to find some form of sick redemption in the world of radical right-wing politics. A rather lengthy biographical sketch in the Everett Washington Herald notes:

Forde said many of her challenges originate from a rough start in childhood, including both physical and sexual abuse. Court records show she spent years bouncing between the street and juvenile lockups, where she served time for repeated convictions involving theft, burglary and prostitution.

The paper trail also leads to a Snohomish County courtroom where, at 11, Forde’s tiny fingerprints were taken as she pleaded guilty to her first felony.

Forde was born in Everett and wound up in foster care as a toddler. Her adoptive mother, who was interviewed for this story on the condition that her name not be published, said Forde was deeply troubled when she joined her family at 4. The girl became a source of turmoil, repeated mental health treatment efforts and attempts at intervention, she said. Forde was taken into state custody when she turned 12 after being convicted of burglary.

And so once again the lives of innocents are swiftly extingushed by the vengeful hatred of right-wing psycopaths –these losers who find violent release from their self-loathing in the harm they inflict upon others who are not like them. It would be just another sad episode in our nation’s fringe politics if it werent for the prominent politcians and other demagogues who daily echo their hatred on the national stage.

(Via Crooks and Liars)

Serolf Divad is of Mexican extraction, and damned proud of it.

Just another grim reminder of life as a wingnut.

This sort of shit is happening weekly now … insane.

And speaking of insane, here’s the latest right wing freakout/tantrum. A laff riot.

I was waiting for the punchline that she was apprehended trying to sneak into Mexico to escape the Pima County authorities.

After all, what could possibly go wrong with a plan that reads like the plot t0 a Guy Ritchie film?

The difference, of course, is that Guy Ritchie films are, occasionally, funny.

The Talibunny has a running mate. Could they be more perfect as representatives of the heart and soul of the GOP?

Meanwhile, I know everyone’s pissed at the Unicorn, but you’ve got to like his stealth ninja reflexes in catching and killing a fly in the middle of a CNBC interview.

@ManchuCandidate:
It’s always interesting when wingnuts look at their own and see a dark reflection of themselves–especially after they realize their ideological soulmates stole their meds.

@SanFranLefty: That is pretty fuckin’ bad ass. Reminds me of the time I used a rubber band to shoot a spider off the wall next to a fellow associate while I was talking to her.

@SanFranLefty: That was awesome. I think all presidents should have that skill. It would only be better if he’d caught that fly by flicking out his six-foot-long, sweet honeyed tongue.

@Pedonator: “It would only be better if he’d caught that fly by flicking out his six-foot-long, sweet honeyed tongue.”

He saves that for Michelle. Why else do you think girlfriend has such a glow to her?

@SanFranLefty: I assume the silky smooth phlegm of insect guts and the feather-tickle of crushed gossamer wings provide that extra frisson.

Really, I have nothing personal against the First Couple, and I hope they leave cum-stains all over the White House walls from their healthy happy sexy marriage.

But at least one of them is supposed to be an expert in constitutional law, and apparently said expertise serves quite well in subverting it. What kind of legacy will the Unicorn leave his daughters?

@Pedonator: But at least one of them is supposed to be an expert in constitutional law, and apparently said expertise serves quite well in subverting it.

Come to think of it, the last president boasted an MBA.

@nojo: It’s almost as if our Ivy League institutions exist to train people not to practice their disciplines, but rather to destroy them.