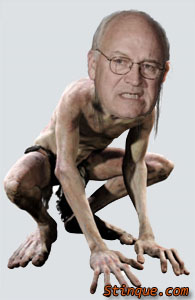 Did’ya hear? Dick Cheney gave a speech today. And all the big networks covered it and broadcast it live because… hey… when the guy who ran the country so expertly for eight years gives a speech, the American people want to hear what he has to say… if only for the sake of nostalgia.

The speech itself was long and boring and all about what an awful person that Barack Obama fellow is because he doesn’t want to waterboard prisoners any more to figure out once and for all where Saddam hid those darned, elusive WMDs.

And while the speech is too long and boring to reprint in its entirety (or even to quote from at length) it does have one redeeming virtue, and that’s that you can summarize Cheney’s entire argument (indeed, his philosophy of government) by quoting just one sentence from it. And here it is. Gentle reader, I give you Dick Cheney’s justification for eight lawless years of human rights violations, torture, secret prisons, detainee deaths while under interrogation, and an illegal war in the Middle East:

It is much closer to the truth that terrorists hate this country precisely because of the values we profess and seek to live by, not by some alleged failure to do so.

That’s right: the terrorists hate us because we profess to stand for justice, freedom and the protection of human rights, not because we in fact, act like rapacious war criminals (allegedly). In other words, it’s what we say that upsets them… not so much what we do.

The net result of this perspicacious, praiseworthy and not at all tendentious observation is that, according to Cheney, we might as well go on acting like ruthless, a-moral butchers, unconcerned by the rule of law because everyone’s going to hate us eiether way (though ironically enough, for the wrong reason! LOL!).

Serolf Divad runs the one of the largest whorehouses in Texas, second only to the Texas State GOP headquarters.

Why does anyone really give a shit about this fuckwad has to say? It is time for him to be put away in an undisclosed location forevah-evah, like somewhere on a melting ice floe in Nunavut.

@rptrcub: Well, as a former vice president of the United States criticizing his immediate successors, you have to grant that Cheney has some standing to spew shit. I’m as much a critic as anyone of false media “fairness”, but I’ll let this one slide.

And really, it’s a pleasure to see the “terrorists hate our freedoms” line turn up again. This ain’t fall 2001, when critics of that line could be easily silenced.

With all that hardware in him, I’ll be that somewhere there’s a remote control with a mute button that would work on him.

Oh, and props for Gollum. I’m usually too lazy to do more than crop.

Nobody really does, but, you know, 24-Hour news cyclea and all…

@ManchuCandidate: This one may be your best to date, absolutely terrific. Bravo!

@rptrcub: Nunavut? You been watching the NatGeo Bee?

I thought we didn’t have titles in this republic. Is this recent, all this honorificality? Or is it a recent deviation from God’s intent?

According to Emily Post, the only formal address the former President or Vice-President would get is “Honorable”, as in,”the honorable Mr. Gore”, like you would a judge.

I think we need to coin one for Cheney, though, since no-one could actually say “honorable” and “Dick Cheney” in the same sentence without stopping for gales of laughter in between. It’s just not efficient. May I propose “vermidicked”? “The Vermidicked Mr. Cheney” has a nice ring to it….

@Tommmcatt the Wet Sprocket: How about a appropriate suffix as well? “The Vermidicked Mr. Cheney swings from the gallows at the Hague after his conviction on war crimes charges”. Perhaps a little long, but we could abbreviate it.

@ManchuCandidate: This is all sorts of awesome, bravo sir. I actually hear Mick’s voice with full band backing him on this, and it works.

@homofascist: Perhaps a little long, but we could abbreviate it.: “Dick Cheney, unplugged at last.”

@mellbell: I just know way too much (for a US-American) about Canada.

@Benedick: Emily Post aside, the courtesy as I’ve always understood it is that you get to keep your highest title upon retirement. But since the title isn’t hereditary, we need not fear Creeping Monarchism. Or creepy monarchs.

@Benedick: Which reminds me, one of my favorite West Wing moments is when Bartlet commands a subordinate, “You will address me as Sir or Mister President.”

Point being not that he’s going batshit crazy with megalomania, but rather that there are moments when Constitutional roles must be respected, and folks need to remember that the Oval Office is not a private playpen.

Why does this walking heart bypass/colostomy bag still have a security clearance?

@smapdi: Why does this walking heart bypass/colostomy bag still have a security clearance breathe?

@SanFranLefty: From your keyboard to god’s ears.
Amen.

@ManchuCandidate: BTW – one of your best yet.

“Dick” Cheney is amazingly appropriate. “Dick” not as his name, but as his title, America’s biggest prick.

Hay Prommie…how’s it going? Hanging in there?

@Also sprach Tommmcatt: Got all the municipal health, fire, and CO approvals today, last one was 4:30 this afternoon, started cooking immediately, till 9 tonight, early morning tomorrow, and a vicious list to conquer, we open at noon. The sign guys put up our sign at 7 pm this evening.

Tired, so tired, going to bed, tomorrow, the day, please let them come, we built it, they just have to come in, and then it will be allright.

So fucking exhausted and exhilarated too.

@Promnight: We’ll be thinking of you tomorrow. Best of luck!

@Promnight: Buena suerte, and may you be cursed by an overload of visitors coming in for Memorial Day weekend.

@Promnight: So when do the “nice place, too bad if any thing happened to it” guys show up?

@redmanlaw: I thought that already happened with the “health department” dudes who made Prommie reconfigure the pipes and the envelopes?

Great t-shirt that would make.

@Jebediah:
I may have to cafe express it.