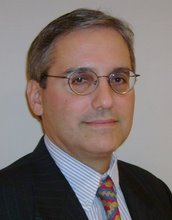 This is William A. Jacobson. He is an Associate Clinical Professor of Law at Cornell Law School and Director of its Securities Law Clinic. He has his own blog, and he also blogs at one of the most unhinged wingnut sites on the internet – The American Thinker. And he is obsessed with Barack Obama’s choice of … mustard:

Obama ordered his burger with DIJON MUSTARD! Bet he had to seek John Kerry’s counsel on that.

The once mighty GOP has been reduced to this.  How they must long for the days when Commander Codpiece strode boldly around the deck of an aircraft carrier.

The updates are equally hysterical:

UPDATE No. 2: The cover-up is getting deeper. Here is an MSNBC website version of the video in which they cut off the audio just before the mention of Dijon mustard. The Hell Burger theme of the coverage doesn’t sound so tough when it’s topped off with Grey Poupon:

Jacobson’s post is either one of the silliest things on the internet or the least funny attempt at humor ever. He’s no Steven Calabresi, but he’s pretty entertaining.

I’m betting that the “clinical” law prof imagined Obama getting driven in his limo to stop beside JoeTP in his beat up pickup, rolled down the window and asked:

“Allah Akbar. Excuse me motherfucker, but do you have any Grey motherfucking Poupon, yo?”

You’re all missing the point. Dijon mustard. French mustard. He’s in the pocket of those cheese-eating surrender monkeys!

@Mistress Cynica: He’s crazy lite compared to the Althouses of the world – scanning his American Thinker stuff reveals the standard tropes: Obama won’t support Israel, Obama is a smooth talker, and on and on. He doesn’t do nearly as much damage as, say, Glenn Reynolds.

Truly the best part of the visit, though, was Joe Biden dithering about his chosen condiment. “Uh, the ketchup, do we, or is that, do we do that, or is that, uh, something you do, oh, ok.”

I thought you had to be smart to be a lawyer.

All right, when you’ve all done laughing…. But I mean, he’s a professor. Surely you need a functioning brain to be a professor?

@Benedick: Click the Calabresi link above, then get back to me.

Expect more panicked responses from hypocritical psychopaths about the sanctity of marriage.

Man is it over for them, though. It looks like “traditional” marriage has sprung a few leaks…

@Tommmcatt the Wet Sprocket: You mean like a 60% divorce rate?

@blogenfreude:
I laughed so hard that I almost wanted a pair of adult Huggies at the end.

@Tommmcatt the Wet Sprocket: I’m trying to get into the habit of saying “opposite marriage”, but old habits die hard.

@nojo: I think what she was going for was the “differently sexed” phrase dreamed up by the LGBUKEUSA spokesgenderneutrals of GLAAD.

What does it say about how conservatives view ordinary Americans that they think MSNBC edited out the request for Dijon mustard in order to spare Obama the wrath and indignation of ordinary, “real” Americans who’d be outraged to learn that the President isn’t a backward, provincial retard who’s scared to eat forrin’ sounding foods that are actually manufactured by Hellmans in Dubuque?

@Benedick: A clinical professor is the equivalent of the fat high school coach who maybe teaches health or typing on the side.

BTW: Miss California’s opposition to same-sex marriage has really beaten back the homosexual agenda, hasn’t it? The storm has been forming, but she, in her wholesome goodness, has allowed people to sleep at night, safe and sound from the Mauve Menace.

As happy as I am for Maine and as fearful that some fuckwits will try to take it away through a referendum, why can’t one of the warm states, or at least a temperate one, do something like this? Are they all retarded? Cali notwithstanding pending a Ca. Supreme Court’s ruling/Proposition 12123128VDWXYQ to legalize gay marriage in 2024 notwithstanding.

@Benedick: I think you’ re looking for “spokestron,” which I use in the similar fashion as “waitron” to describe the people who wait on you at a restaurant.

@Jamie Sommers: I did not know that. I thought they were special.

@chicago bureau: Wholesome? Seems she has some trouble keeping her shirt on, but I guess flashing your rack for cash just leads to good old-fashioned opposite marriages, just like god intended.

@rptrcub: To say nothing of New York.

I remember ‘waitron’ from Minneapolis. I liked that city. I was all set to move there. Then I didn’t. One night I saw the northern lights. Then it got cold and I came home.

@redmanlaw: The electro-whatever band or the song by Roxy Music? Either way, teh Awesome.

@Jamie Sommers: Hey, hey, hey! Some of my best law school profs were the clinical ones – they were the ones with real-world experience, as opposed to the ivory tower folks.

@rptrcub: Heat + Humidity=Stupidity.
You get to decide: warm weather or tolerance?

@Mistress Cynica: Cali will come around soon enough. And there’s no humidity in Sandy Eggo.

@SanFranLefty: Stick around: “criminally insane” doesn’t require much patience. Vis-a-vis moutard…when effie was an adolescent, mustard was like Coke or Tide . The young hipster persisted in NOT asking for French’s Salad Spread (Yuh mean muussturd? Whyntcha say so?) , taking on the onerous task of asking in every roadhouse, diner, bistro, burger-bar, ballpark, bazaar, oasis, “do you have any REAL mustard?” To be brief, after years of educating waitrons (are your guy’s’ wanting one check???), it’s working! Now, it would be an embarrassment to ask. Whole dining concepts are based on hip knowledge and presentation of exciting condiments. No upscale restauranteurs can afford to be without a choice.
I’d be willing to bet that our Prommie would concur.

I enjoy Grey Poupon on my hamburgers.