Stinque
Home Latest Comments Log in
If it smells, we’re on it.
Stinque
Cassandra was right.
God's Will 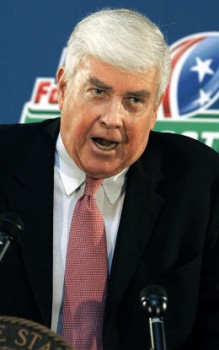 Eight years later, after serving a term as President George H.W. Bush’s housing secretary, he made it onto the national ticket as Bob Dole’s running-mate.

With that loss, the Republican bowed out of political office, but not out of politics. In speaking engagements and a syndicated column, he continued to advocate for the tax reform and supply-side policies — the idea that the more taxes are cut the more the economy will grow — that he pioneered.

Not to speak ill of the dead, but I will.  Benjamin Disraeli said it best:

“He was distinguished for ignorance; for he had only one idea, and that was wrong.”

Re: Kemp, this from his wikibio: In a decision that was reviewed and upheld by the Surgeon General of the United States Army, Army doctors found him as unfit for active duty. That year, he led the Chargers to a division title, passing for 2,686 yards and 15 touchdowns. Years later, Kemp’s 1961 Chargers roommate, Ron Mix, recalled that Kemp needed “ten or so” shots of painkillers before each game and commented that “it sounds weird, but he could play football and not be fit to serve in the Army.”

I did not know that.

Jack was one of the few remaining GOPers who could oscillate between sounding okay to being an ass. Now, they’re pretty much all major asses.

A few choice selections From the New York Times obit:

But though Mr. Kemp had not studied a lot at Occidental, he had been making up for it for years. On long team flights, his reading habits — Ayn Rand and William F. Buckley Jr., among others — stood out. The wide receiver Elbert Dubenion recalled this year, “He was reading these political books, and we were reading the Katzenjammer Kids.”

Ayn fucking Rand… that’s just great… Kemp, the guy who put the country on a path to deficit financed bankruptcy, and Greenspan, the guy who was so sure the markets could do no wrong that he bet the U.S. economy on it… and lost. Both of them Randroids. Why does this not surprise me?

But the president hailed Mr. Kemp on his retirement from the House in 1988, writing in a letter, “We showed this town that — if you want to make the government move — let a guy from Hollywood and a football quarterback call the plays.

There you have it, guys… a B movie actor and a football jock shaped the modern Republican and made it what it is today. Anyone surprised by this?

I remember Jimmy — during the debate, I think — repeatedly referring to the “Reagan-Kemp-Roth” bill, and thinking how stunning flat that was as a political accusation. (For the young ’uns, it was commonly known as “Kemp-Roth”.) Jimmy probably would have been steamrolled anyway, but he didn’t help himself as a campaigner.

@ManchuCandidate: Sort of a Warren Rudman with good hair.

And the bad week for Republicans in the Northeast continues.

A gay friend of mine said that Kemp played on that side of the field, the line of scrimmage in his case being deep in the closet.

@Dodgerblue: I could see that. Add self-loathing closet case to the obit. Guess he had something else in common with Old Man Forbes and Little Stevie Forbes besides the love of tax cuts for the rich.

@SanFranLefty: Dumb fuck! One of my undergrad profs said the number one thing that gets politicians in trouble is that they end up trying to help their friends. Substitute “give them money they didn’t legally earn” for “help” and stick “boy or girl” in front of “friends,” and there you go.

@JNOV: Help their friends or help themselves. Politicians are like NBA stars with the posse from the hood and starfuckers in tow.

The guy was a true believer who helped send this country on the road to financial ruin, but he wasn’t a hatin’ christian right wing wacko like the current GOP losers.
He was naive enough to believe that his supply side bullshit would help blue collar workers and minorities. IIRC, he was ” Bob Forehead” in a long running political comic strip of the 80’s

@fupduk: He does stand out in not being a racist; unlike almost everyone else in the GOP, he actually spent time in the presence of black people. Naked.

@SanFranLefty: You know, I am not sure what “closet case” means; is it someone denying their homosexuality completely, not acting on it, or someone who lives an ostensibly straight life, while going out “on the downlow?

@Promnight: I don’t know – I use it to refer to someone who doesn’t act or acts furtively (see, e.g., Evangelical ministers). But I defer to the gheyz among here as to the true meaning. BTW, you need to go check the Friday night thread. I gave you an explanation as to #4.

@SanFranLefty: I saw that expxlanation. Now, I do have a broad view of what is sex, but I think its not unreasonable to say orgasm is a requirement; but I think if that did not happen, you would not have claimed that trophy.

When I was in law school, there seemed to be a fad of doing it in the library, in some distant row of shelves late at night, many of the fervent law school couples (the tension and shared group identity of law school, and the desperate partying we did together to let off the steam, created the most sexual atmosphere I have ever been in in my life, who wound up drunkenly bonking at or after or in the parking lot, or whatever, after or at some law student gathering, made for amazing gossip, every week) seemed to make it a point to do that. I never did.

I was a lonely nerd almost all the way through school, even law school.