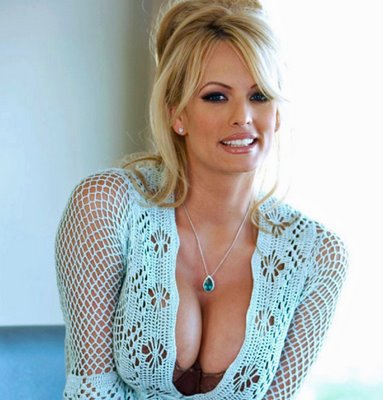 Apparently, she has a pair of ears too:

What seemed like temporary clouds only months ago has transformed into a tropical storm approaching category one hurricane status. When DraftStormy launched its efforts to draft Baton Rouge native Stormy Daniels to run for United States Senate late last January, we were labeled a “cheap political stunt.” The old Louisiana status quo that has been in power for decades could not comprehend the tsunami of grassroots support Stormy Daniels generated among the working men and women of Louisiana.

I expect Vitter’s testicles are shriveling as I write this.

Today, the DraftStormy Campaign entered the next phase when it announced the event schedule for the initial listening tour of prospective candidate for Senate, Stormy Daniels.

Stormy will kick off her listening tour of Louisiana with a stop for lunch at The Roux House in Baton Rouge, Tuesday, May 5th at noon. She will meet with Louisiana men and women and listen to the issues and concerns they struggle with everyday.

They probably won’t let her hold an event at Hooters because, well … think about it.

Following her Baton Rouge event on Tuesday, Stormy will head to New Orleans, with a lunch at Serio’s Po’ Boys & Deli, Wednesday, May 6th. She will continue her conversation with the citizens of Louisiana and listen to the ongoing struggles they face in these troubled economic times.

DraftStormy is excited about the listening tour and is confident that it will help persuade Stormy Daniels to accept their challenge and run for Senate. We believe that the voters of Louisiana are ready for change and look forward to bringing honesty, integrity, and strength of character back to the United States Senate.

Damn, I want her to run.  Maybe she’ll put on the schoolteacher outfit for the debate, and beat Vitter with a ruler.

Steve in Manhattan
1:30 pm • Friday • May 1, 2009
comment »
Choose Your Delusion
Wingnut of the Day Another GOP Tantrum
40 Comments
ManchuCandidate

It might be the only political tour where the candidate gets to dance on a stripper pole.

@ManchuCandidate: I would donate a hundred bucks to her campaign to see that. In crumpled ones of course …

I expect Vitter’s testicles are shriveling as I write this.

Nah. Wendy took care of that a long time ago.

I am going to suspend my Stormy-big-titty-posts boycott momentarily to announce that I do not have the swine flu. They didn’t even test me for it. I have a cold and one of the worst cases of seasonal allergies they have ever seen.

@JNOV: Feel better. And this is not a big titty post. This is a David Vitter post. Stormy is just the agent of his humiliation.

You have a future in the Republican Party, my friend. ;-)

@Tommmcatt the Wet Sprocket: Right on!

@blogenfreude: Oh, I see. That’s why his name is in the headline, his picture is above the jump, and there’s this big block quote about his listening tour. I guess nuance is just lost on me. Oh, and thanks! I’m feeling pretty okay. Love you, you boob-obsessed knucklehead.

I wonder who paid for her implants?

And, just for the sake of argument, were she to get into an altercation with Carrie Prejean (politics gets everyone hot) which turned physical – which one would come out on top?

@Benedick: I see what you did there.

Stormy just exudes wholesomeness, I think. She wouldn’t be seen in the same room with that trampy pageant contestant.

I’m all for getting ridding of V. But, do we know what Stormy stands for? I wonder.

@JNOV: Chicken soup and Gatorade. Works for me.

@lynnlightfoot: I think she mostly lies down.

I will be here all week (even though I haven’t been) :(

What I like about Stormy is that behind that I’ve-had-sex-with-multiple-partners-for-pay-on-camera facade, she’s just a regular ole Jane Six Pack.

That Vitter “ad” is teh awesome. Can we set up a StinquePAC and get that on cable television?

@lynnlightfoot: Who cares what she stands for. How could she possibly be worse than Vitter?

Amazon is offering me a subscription to Penthouse, a video from the IFC called “Caged Combat”, a book called “La Comtesse de Baton Rouge” and a DVD by 60 Minutes on Bobby Jindal.

Amazon thinks I am a very conflicted individual, apparently.

BTW, what’s the DVD on Bobby Jindal called? Bobby vs. the Volcano?

Happy 90th to Stalin-lovin’, banjo pickin’ “Jimmy Crack Corn” sangin’ ol’ lefty Pete Seeger. “Animal House” might have been one scene shorter without him. My buddy David “Pops” Amram will be playing Pete’s 90th BD gig at Madison Square Garden. He has taken under advisement my sugguestion that it be called “Monsters of Folk” and that the set have lasers, a giant video screen and a riser on which Amram will be seen coming up through the floor in a cloud of smoke while playing his French horn or penny whistles.

Wait, are you saying that Pete Seeger is 90 years old?

How old does that make me?

@Tommmcatt the Wet Sprocket: Amazon thinks I am a very conflicted individual, apparently.

No, just a typical Republican.

@ManchuCandidate: Bobby versus the Volcano
FTW

@redmanlaw: He collaborated with some dude on the English version of The Internationale. The literal French translation was too hard to sing or something. Fitting that he was born on May Day! Huzzah!

(Am I back on that Goddamned Stormy thread? Fuck!)

The best news in this story is that Serio’s Po’ Boys is open again post-Katrina.

@JNOV: Don’t mess with me or I’ll find an excuse to do another Stormy post.

@blogenfreude:
At least I understand the Stormy posts. (BOOBEHS!) Your car posts go over my head.

@SanFranLefty: Boobs and cars. Cars and boobs. I think any movie can be improved by a car chase and some gratuitous nudity.

@Dodgerblue: Explains the continued popularity of Dirty Harry movies with my significant other. Whenever we’re driving over to friends’ places in Portrero Hill, Mr. SFL has to point out sites of Dirty Harry chase scenes.

Most of the public only understands tits, guns and explosions; it’s our kulcharal hereetage.

@SanFranLefty: Cars are like high art to men. We feel, when contemplating a piece of complicated machinery, the awe we are supposed to feel when contemplating the Mona Lisa, or the ceiling of the sistine chapel. Its true even among many men who also fall into abject awe at art and poetry, though. Thats not so bad, is it?

Boobehs are just wonderful, the feeling we feel towards them is not even always sexual, its just pure childlike delight, beautiful, in a way, an innocent natural reaction to the beauty of the female form, and its not all about big ones, either.

Noone else got the ad for Satanic jewelry? Is it me?

@Original Andrew: Many men are taught from boyhood that emotions are sissy, that being a man means being callous. Thats not a natural thing, even for men, so they have to distract themselves from emotion. Car chases, explosions, and tittehs are good distractions for those who suffer from the conflict between the ideal of manhood forced on them by our kulture, and their natural feelings.

@Promnight: When I see a car I see everything that’s just wrong. Even when I see my own cute little car that makes me feel like a go-kart driver on the way to work, and has lots of cool gadgets that I’ve never used (except the button that releases the smoke-bomb canisters behind me when I’m running from the bad guys, ok, that gadget I’ve used quite often), at least just the moment before I climb into my little metal womb of destruction every morning to convey myself from home to work I shudder a little bit inside and think, why have we arranged our lives around this machine? and will I once again survive to tell the harrowing tale of my commute?

It’s much easier to understand the fascination with boobies, even though I am teh ghey.

@Pedonator: Oh, I hate what cars have done to society. They created suburban sprawl, and the attendant waste of resources, the impossibility of mass transit (cars let homes spread everywhere, its just impossible to get mass transit everywhere, before cars, development spread along mass transit lines). They are 75% of the reason this society consumes so much more of the world’s resources, per capita, than any other, they are convenient to each individual, but the way in which they allow us to spread out and sprawl destroys so many efficiencies associated with urban living. So many costs far far beyond the gas they consume.

But you can be conscious of all this, and still love craftmanship and engineering and a tool that performs its functions so well, ya know? Its like the Zen of Motorcycle Maintenance, ya know? Should that be a book club assignment?

Cars and TV; thousands of years from now sociologists will still be marvelling at the incredible changes these two things made in the way human beings live as social creatures.

@Dodgerblue: This is why Vanishing Point is the greatest movie ever produced. Nearly flawless. If only Kowalski had pestorked the hippie on the roof of the Challenger like a regular guy. . . no other movie would ever have needed to be produced.

@Promnight: I think my long years whoring myself out to technology for a paycheck have made me a Luddite. I do have cautious admiration for what man hath wrought, but I’ve been bitten too many times by calls at 3am when the server is down to have an unbiased appreciation for fine engineering.