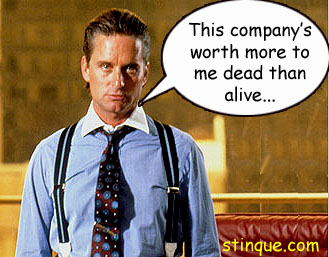 If you’re holding something valuable and fragile in your hand, right now, I suggest you put it down before reading what follows. That’s because if you’re holding, say, that coffee cup your kid decorated for you at day care, or a cell phone, or, more likely, that precious Fabergé egg your grandmother willed you before she passed away, you’re going to be overcome with an uncontrollable urge to smash is against the wall when you read of the latest twist in the saga of General Motors’ struggle for survival.

The twist appears in a New York Times article, published today, entitled “G.M.’s Latest Plan Envisions a Much Smaller Automaker.” The article expands on some of the drastic cuts that the General is finding itself forced to make in order to soldier on as a viable automaker in this terrible economy and a changed industrial landscape far less suited to the current model of the American Automotive manufacturer:

G.M. said it would eliminate another 21,000 factory jobs, close 13 plants, cut its vast network of 6,500 dealers almost in half and shutter its Pontiac division.

Now, none of this is particularly new. It’s been clear for some time that General Motors is a bloated corporation, with far too many over-lapping brands and products. The company simply cannot continue to bleed cash the way it has these last few years and survive.

And GM’s workers are being hit hard. They are taking pay cuts, sacrificing benefits, looking at retiree health coverage that depends upon GM’s survival, since it will be funded by converting liabilities into company stock.

But one big roadblock has emerged in GM’s re-structuring plans, in the form of the company’s bondholders. The re-structuring plan requires at least 90% of GM bondholders to accept a deal in which they trade 225 shares in GM for every $1000 in debt that they hold. In the end they will be left holding some 10% of the company, while the U.S. treasury will own 50% and the UAW 39%. And these bondholders aren’t happy about the deal, insisting that the UAW –that is, ordinary, blue-collar, working folk– are getting too big of a piece of the pie. After all, they’re only risking their retirements, whereas bondholders are risking cold-hard cash that could be used to buy a yacht or a private jet or something.

OK, you say, then fuck ’em. Let the bondholders eat cake. Let GM declare bankruptcy, let the bonds’ face value drop to $0 and let those greedy bastards lose their entire stake. Ah, not so fast. here’s where things get interesting, and by interesting I mean sharpen the pitchforks, put on a Che Guevara t-shirt and let’s round up these modern-day John Galts and toss them on a huge bonfire:

Representative Thaddeus McCotter, a Michigan Republican, is concerned that some bondholders want the company to go bankrupt because they also hold credit-default swaps insuring them against losses.

He is urging the Treasury secretary, Timothy F. Geithner, to disclose which G.M. bondholders have default swaps from the American International Group, the insurance company that was bailed out by the government.

“It would be unconscionable to use taxpayer money to help people benefit from the bankruptcy of General Motors,” Mr. McCotter said.

Read those three paragraphs, then read them again. And when you’ve calmed down meet me at the Bastille, OK? Because what you’ve just read might possibly encapsulate everything that is wrong the sort of free-wheeling, unregulated, value-free, cutthroat brand of capitalism that is practiced in America today.

First, you’ve got the credit default swap. This little bit of financial voodoo is one corner in the triangle of greed that let the world to our current economic situation, teetering on the edge of a global financial collapse.  It is basically an insurance policy that companies like A.I.G. sold to indemnify purchasers against investment losses. And A.I.G. sold these swaps like a girl scout trying to earn a solid gold merit badge by selling most boxes of thin mints in the history of mankind. Who gave a damn if A.I.G. could actually back these policies? They made money for the company, so damn the torpedoes! Of course, when the housing market collapsed, and with it the securitized mortgage market (the other two corners of the triangle), A.I.G. found it had written policies on a multi-trillion dollar stock bubble and couldn’t possibly repay.

Enter the Federal Government. Fearing that A.I.G.s inability to make good on the financial instruments it had insured, the Bush administration leaped to shore up the insurance giant to protect against further economic collapse occasioned by the failure of institutions that depended upon payment on their credit default swaps for their continued survival.

Which brings us back to G.M. and the company bondholders. These brave, selfless souls appear ready to allow G.M. to declare bankruptcy and, essentially, collapse, because they’ve calculated that they’d be better off taking the money they’d get from cashing in their credit default swaps than taking a chance on General Motors making it through this restructuring plan and once again rising to greatness.

And who is ultimately going to make them whole again? Who’s going to be writing checks to cover those CDS’s? Why, you and I, dear reader. For it is you and I and the rest of America’s taxpayers who now basically own A.I.G. after the Fed acquired a 79% stake in the company and will be expected to pony up the cash to make G.M.’s greedy as Hell bondholders whole again.

So, as I said: meet me at the Bastille at noon, guys. Bring your pitchforks. Bring firewood. Bring a GM bondholder. It’s time for a good ol-fashioned bar-b-que!

Will the WSJ write about this?

This reminds me of a parable I once read about breakfast.

The bond holders remind me of the chicken who allows its eggs to be turned into a meal.

The GM workers remind me of the pig (maybe not the best analogy considering swine flu) who provides the bacon.

The difference between the two is commitment. The chicken makes a lot of noise but is only willing to sacrifice its young where as the pig gives breakfast it’s all, it’s life. Of course that is never considered in bankruptcy court–a subject that strikes close to home considering my employer is in Chapter 11 and which is why many of my fellow coworkers don’t have any severance while the execubots and toadies get bonuses, not that I’m bitter about it or anything.

The Repub (?) has a great idea. Bond holders who have AIG CDS should be double fucked.

I’m not buying the Girl Scouts / Thin Mints (better frozen!) analogy, because the GS need to deliver the product before they get paid. So, value is exchanged for value. AIG, in contrast, took money for a product that they knew was worthless — their promise to pay a gazillion $$ they didn’t have if some bad stuff happened. Why AIG made more money selling this dreck than the GS make selling delicious Thin Mints is beyond me.

Well, there are two things that are sure to happen now.

(1) Joementum will (finally) give up the pretense and switch out himself. He will almost certainly cite the 60-vote supermajority and the great evil (EVIL!) that would be done with it.

(2) The GOP will take the Al Franken thing all the way to The Hague if they have to.

@Dodgerblue: More like a Girl Scout standing in front of a casino in Atlantic City shouting “goin’ out?” at passing cars, then leaning into the windows of the ones that stop, snatching the driver’s cash, punching him in the nuts and running away to buy gasoline to use to burn his house down – after she’s taken out an exotic insurance policy that pays her off when it’s destroyed by fire. What could be more American than that? Free enterprise!

@Dodgerblue: Finally cleared the IMs and could finish it. Works for me now.

GM bond hedgers are the kinda people who go speed dating in graveyards.