Stinque
Home Latest Comments Log in
If it smells, we’re on it.
Stinque
Cassandra was right.
Autopia

Because none of you bothered to get up off your asses and buy a Solstice or a G8, GM’s “excitement” division will go the way of Oldsmobile and Plymouth:

Pontiac is a brand of automobiles produced since 1926 and sold in the United States, Canada and Mexico by General Motors (GM), marketed as an “athletic” brand specializing in mainstream performance vehicles.

On April 27, 2009, amid ongoing financial problems and restructuring efforts, GM announced that it would phase out the Pontiac brand by the end of 2010 and focus on four core brands in the U.S.: Chevrolet, Cadillac, Buick, and GMC.[1]

In my opinion it was badge-engineering that killed Pontiac (an Impala is a Catalina is an Olds 88 is a Lesabre is a Sedan de Ville).  Why buy a car from Pontiac if Chevy offered the same car for less money?

The Pontiac brand was introduced by General Motors in 1926 as the ‘companion’ marque to GM’s Oakland Motor Car line. The Pontiac name was first used in 1906 by the Pontiac Spring & Wagon Works. A name linked to Chief Pontiac, an American Indian chief who led an unsuccessful uprising against the British shortly after the French and Indian War. The Oakland Motor Company and Pontiac Spring & Wagon Works Company merged in November 1908 under the name of the Oakland Motor Car Company. The operations of both companies were joined together in Pontiac, Michigan (of Oakland County) to build the Cartercar. General Motors in 1909 purchased Oakland. General Motors’ first Pontiac was conceived of as an affordable six cylinder intending to compete in the more inexpensive four cylinder model range. Within months of its introduction, Pontiac was outselling Oakland. As a result of Pontiac’s sales rising while Oakland’s sales were declining, Pontiac became the only ‘companion’ marque to survive its ‘parent’, with Oakland ceasing production in 1932.

Damn I love cars like this – a 1948 Pontiac Silver Streak Convertible Coupe: 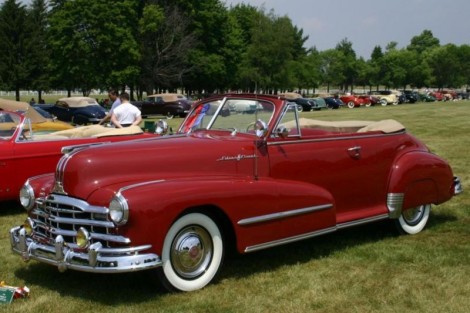 My buddy’s Dad had one of these with a 455 in it, and we used to scare the crap out of each other. 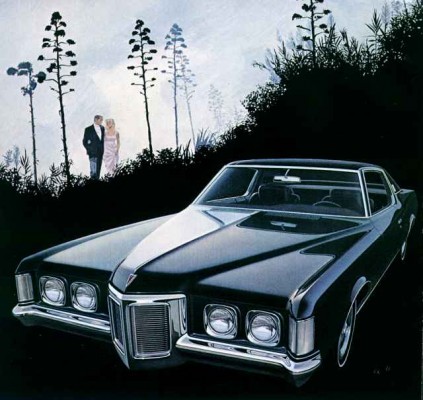 Yes, it’s a 1969 Pontiac Grand Prix.  Station wagons had the same engine, but this was a bit more exciting.

So now Pontiac will go to that junkyard in the sky, sometime during 2010.  RIP GTO.

I didn’t understand a word of this but feel I am a better person for having read it.

You start engineering badgers and you thwart the will of God.

@Benedick: would it help you if I said that a Citation was a Phoenix was an Omega was a Skylark?

Remember the Caddy Cimarron? What a POS.

We had a Pontiac wagon late 70s, early 80s. Incredibly, my dad paid for the 8 track option despite the fact that the 8 track had already died.

@Dodgerblue: Now see we had a Cimarron and I loved it. I’ve written of it before. And how it would shed chrome. I’m still pulling bits out of the swamp garden. And it shrieked in cold weather if you tried to turn the wheel before it got warm. God I loved that car.

Aahh, the Cavalier, the most eastern european, even Soviet, car america ever made.

A complete piece of shit.

My dad, in his old age, owned 2 of them; they were the Dodge “cheesebox on a raft” old person’s car of the 90s.

And that they threw some tacky upholstery and chrome-plated pastic gew gaws, and called it a “Cadillac,” just thinking about this makes me change my mind about the importance of saving the US auto industry.

The cavalier was the American Yugo. It was a piece of shit.

Any word from Lyle Lovitt on the Death of the Pontiac?

Roger Rabbit and Batman would have been comfortable in either of them rides up there.

Item of Interest – those GTIs you see in the video might have been loved in Germany, but they were made in … Pennsylvania. I owned a German-made Rabbit, drove a PA version, and kept the one I had.

@Jamie Sommers: Yeah. The testosterone is kind of thick – I think we need Homofascist or RomeGirl to post photos of hawt Italian men holding puppehs or something to balance it out.

@redmanlaw: Got my tix yesterday to see Lyle & his Large Band at the local winery venue. I generally see him 2-5 times a year….

@SanFranLefty: Did you see Lars Ulrich from Metallica on Rachel? I loved her description of how the music fit into her life – “it was for that period when I was doing what I shouldn’t have been doing.”

@redmanlaw: Uh, yeah, that kind of sums up my memories of Metallica. If Jamie Sommers isn’t my secret twin sister, then I feel like Rachel is my secret twin. It’s getting old how many of my friends will call me and say “Did you see Rachel? It’s like I’m listening to you!” – Except she’s smarter and cuter and richer than I am…

@Benedick: Good for you,
Benedick. At least you will never buy a car from one of us that purports to be quite another model. And (“planned obsolescense”?) You didn”t get that down your coal mines, or even in the potteries. I remember being perplexed as a kid of ten or so. An older kid told me about major auto-makers selling a car as top-of-the-line (the Cadillac!) for hundreds more, utilizing the same chassis, body. and engine design virtually identical. to the Buick (mom and pop) , Olds Mobile (already veiled in the mists of history) Pontiac Grandprix and GTO, muscle cars, and every auto renter’s Hawaiian nemesis, the bright red convertible compact Sunfire piece of merde. And the lowly Chevy. Homespun, but matchless for evocative model names: Malibu, Biscayne, Impala. Please excuse me for a minute or two. Sleep beckons.

@EffeteHipster: Funny – I rented a Pontiac Sunfire convertible when I went to Sanibel 13 or so years ago. Barely adequate – at least the top went down.

I think Mrs RML lived on Sanibel when she worked at a paper there.

@EffeteHipster: We didn’t buy it new. We bought it from a nice man who told us it had only had one owner who was an old lady who hardly used it except to go to church. He gave us a special low price too because he liked us so much. I loved all the little buttons and slides and electrical whatsits inside that were supposed to make things rotate. Some of them even worked.

I know nothing about American cars. Except that I like our Chrysler Sebring. And I enjoyed driving a Firebird once. And we had several Escorts. And a Taurus that felt a week wasn’t complete without a major breakdown.

@Benedick: For some reason the Sebring is regularly mocked over at Jalopnik. Sure it’s the prototypical rental car, but is it that bad?

@blogenfreude: I like it. I drove to Salt Lake City in it and had a fine time. You can fold down the seats and fill it with trees and shrubs. It gets pretty good mileage. It handles very well and I feel safe in it. We got it with a V6 engine and it tears up the road. Comfortable. Good value. Good car.

I used to rent Sebring convertibles on a regular basis. I always enjoyed them. I’d buy a used one if the price was right. It’s a good convertible for a guy who wants take his family out for Sunday drives. I don’t know from sedans.

They redesigned them this year- I rented one this January and didn’t like it as much as the earlier years. I agree with jalopnik regarding the 2009’s