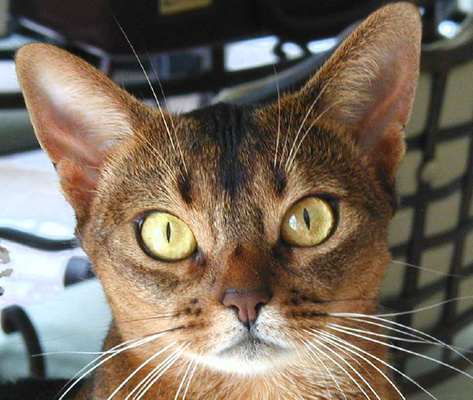 Punkin the Cat hates living with the fat fucking twisted retard Douche Limpbag but loves reporting from behind enemy lines, using only his amazing telepathic powers

From time to time, Stinque.com will assign special correspondents who though without conventional press credentials can, due to special skills or access, report from the front in this, the uneasy twilight years of the confrontation between civilization and the neomediavist movement that is gripping America.

Rush Limbaugh’s pet, Punkin Cat, has agreed to post occasional reports from the high castle of neofascist fucktard and enemy of civilization, Rush Limbaugh, to let the world know of the cackling insanity and wanton, gasping depravity of the sick fuck that has assumed the role of GOP’s First Freak.

Keeping with its tradition of news product innovation, the entire Q and A sequence with Punkin was delivered to Stinque.com editors through direct telepathic link with him. Pnnkin informs us that he is not only telepathatic, telekinetic and teleportive, a mutant of almost unlimited power, he has used used his psychic power to brainwash Shitbaugh into believing he is a space alien who would send the sun supernova if he dares to cross him.

S.com: So, like, what is the story with Shitbaugh and his love of torture and inflicting pain? We saw that segment with him slapping himself in the face to prove CIA recommended interrogation procedures were humane and stuff and, besides being pathetic, it betrayed a certain, I dunno. . .

PC: Oh, get your head out of your ass, man. It doesn’t take a shrink to figure out the fucking guy is into pain in a big way.

PC: Very good, shit-for-brains! Yes, this guy is so twisted you could use him for the business end of a toilet snake.  Fuckbaugh can’t get his pathetic Vienna sausage to salute unless he is being tortured in ways . . .

PC: When he is lucky. Sometimes, he is so fucked up on crystal meth and DeKuyper Schnapps that the only thing that will do it for him is when Karl Rove dresses up in an SS uniform and beats him with a tire iron while they are watching news reels of the Nuremberg rallies.

PC: Yeah. Yeah. I mean, I get my jollies, too, but hey, goombah, I just pretend to be a space alien.

S.com:  So, he was, from his point of view, really telling the truth about slapping around not being torture.

PC:For his last birthday, Barbara Bush came over and anally raped him with a singed weasel.

At any given moment Rush is so hopped up on Oxycontin that he wouldn’t notice if you pulled his fingernails off with a pair of pliers.

And the prize for phrase of the day goes to:

…raped him with a singed weasel

One. Thousand. Dollars. The mind reels.

@Tommmcatt the Wet Sprocket: I am just impressed that the cat is such a sick fuck he considers us a family publication.

@blogenfreude: That is fucking insane. Of course, it is Jersey. Here in P’tucky, we’ve got a race for governator and the primaries for Specter’s seat, but I think the front runner Rethuglicans in the state house race are smart enough to keep the JoeDaStoopid at arm’s length.

Toomey on the other hand may be the tip of the RW spear in the attempts to unseat Arlen, and is capable of reanimating Bud Dwyer then killing him again if he thought that would get him the R nod.

Yeah. So, JNOVJr said to say that you, FCS, are insane and he loves you.

TJ/Supersecret cousin made an appearance on our first cousin FB email blast, and she said basically: 1. I am overwhelmed, and 2. If any of you fuckers says ANYTHING that even SLIGHTLY besmirches my dad, I will cut you. Huzzah! I wrote something about how sorry I was that she got hit upside the head with all this info (hint hint blabbermouth cousin!), that once she wraps her head around the whole deal, it’s her choice whether or not to interact with us and to what extent, and we will RESPECT her choice (hint hint BC!), that I can’t imagine how hard it must be to all of a sudden have all these questions that will never be answered (hint hint BC!), and that I was taking myself out of the email loop and people could email me personally if they wanted to. She emailed me immediately. That was kind of cool.

“Singed weasel.” FCS is the master. And even though several stinquers have met and broken bread with him, he is still a complete mystery; not a word from an eyewitness. He is clearly capable of instilling great fear.

@Nabisco: If Lonergan had any $1,000 level donors, they would politely buy the ticket and not show, thats the norm even for a respectable celebrity supporter meet and great.

Lonergan is not a serious candidate, he’s our own home grown Ron Paul. He has zero support, republicans hate him, he is a joke.

@JNOV: My tongue caresses your earlobe.

Anyone following the details of Zelikow’s description of his arguments against torture, and how they were “disappeared?” There’s doin’s a transpirin’.

@Nabisco: Was Bud Dwyer that guy I saw, on a televised press conference, pull a gun out of a manila envelope, put the business end in his mouth and pull the trigger? ::shudder::

Oh, and Toomey’s a douche. He gave Arlen a run for the money last time.

@JNOV: That was him.

@Promnight: I think it was a school holiday, b/c a bunch of people I know remember being home from school and seeing that shit. Unbelievable.

@JNOV:
That was a pretty interesting story from yesterday. I’m glad at least someone is making contact. In my family it’s a lot of grudges and repressed anger.

@ManchuCandidate: Yeah. The thing is, her dead dad told some fundamental whoppers, and now she can’t confront him about them. Basically, her identity might change. That’s not necessarily a bad thing, but she’s been placed in a weird/uncomfortable/scary situation by her dad and my blabbermouth cousin, and she doesn’t deserve to be there. And I will help her cut anyone who badmouths her dad. And at some point, she’ll probably be angry with him for lying. My heart goes out to her.

@JNOV: Someone could do a great study on the vagaries and suggestibility of memory, using the Bud Dwyer incident. Happened around 1986, I think. The Rutgers Camden law school bar, the only bar within walking distance, had the front page of the Philadelphia Daily News from the next day taped up behind the bar, full page picture of Bud with the gun in his mouth.

Now I know that I did see the whole video, I think it was later the same day, they re-ran it, with the blood spattering on the wall behind him and everything, I particularly remember the sound made simultaneously by all the people in the room, a kinda deep “whooo” sound, descending in pitch. It must be the sound people make while their brains are registering a shocking stimulus they have just seen.

But my memory is so confused, and I have sometimes thought I saw it live, but I am pretty sure I didn’t.

Nothing in life is ever really certain, even what you think you remember you saw.

@Promnight: I have no memory of breaking bread with FCS. I don’t know what you’re talking about.

@ManchuCandidate: @SanFranLefty: I think the important thing to remember is that she is suffering too. They probably took away her titanium credit card – she has been downgraded to plastic! Oh the humanity.

@ManchuCandidate: @homofascist: She probably has to concentrate very hard to keep her forehead from moving, so her friends don’t know she can’t afford the Botox anymore.

@Promnight: Somehow I grew up in this great state, including my undergrad years, but never knew about Dwyer until I started my current job three years ago. I blame it on the fact that I left this place in the rearview mirror shortly after the Challenger exploded.

@SanFranLefty: Heh heh, so, FCS has one of those Men In Black memory erasers, huh?

@Nabisco: At least you grew up. I just got older and wandered.

@SanFranLefty: I recall a Fat Tire ale. And crying babies in the airport.

@Prommie: @Dodgerblue: I remember drinking white wine, and sitting next to a very distinguished looking and very tall white guy with cool purple eyeglasses. And then I was back in my office going through email.

@SanFranLefty: This guy? (I couldn’t find one with shades, sorry).

@FlyingChainSaw: Jr. says, “Fair enough. I retract my statement. I still love him, though.”

Punkin the Cat hates living with the fat fucking twisted retard Douche Limpbag but loves reporting from behind enemy lines, using only his amazing telepathic powers

@JNOV: Since Mumia’s not going anywhere…

@Nabisco: I was describing Dodger, BTW.

@SanFranLefty: Haha! I think I’m the only Philly person without an opinion of Mumia. I need to read up on the whole thing. From the little I know, it sounds like his trial was pretty fucked up, and he deserves a new trial at least. If he was tried during Frank Rizzo’s reign, he definitely needs a new trial.

Here’s another one for you: