Right-Wing Orthography: A Survey of the Literature 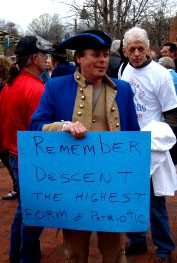 Just in case you are somewhat puzzled by the title of this post, allow me to explain: The word “orthography” specifies an academic discipline most commonly practiced by the largely Socialist, America-hating faculty of elite Northeastern colleges like Harvard, Princeton, Yale and the Massachusetts Community College at Quinsigamond. Like Socialism, orthography is doctrinaire and very strict in its oppressive, freedom-limiting dogmas, allowing for little variation from its largely capricious and arbitrary norms. Much as they demand adherence to political correctness, Marxist theorists at Yale, for instance, demand “orthographical correctness” of their students, and will frequently deduct points from essays and reaction papers that diverge even the slightest from the orthographical straight-jacket devised by such America-hating orthographical activists as Noah Webster.

But, of course, Conservatives love freedom, unlike the Socialist enemy. And what sort of freedom can man truly be said to possess if he is divested of the freedom to spell words any damn way he pleases? Was not the American Revolution sparked by the thirteen colonies’ refusal to spell the world “color” with a “u”? So as a tribute to the proud men and women of the conservative movement who have bravely severed the chains of orthographical tyranny, Stinque bring you a survey of creative conservative spelling:

An oldie but goody: This is the picture that launched the right-wing rebellion against orthographical orthodoxy. There are even dictionary entries devoted to this image. 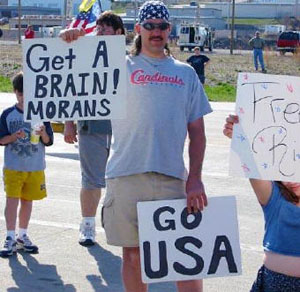 Nothing riles up conservatives quite so much as all those smelly immigrants who refuse to learn the English language (except for maybe left-wing academics who demand that their students learn to spell correctly): 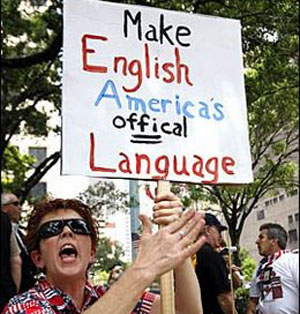 The word “bought” is the past tense of the verb “to buy,” which is a synonym of “purchase.” The word “baught,” on the other hand, refers to the practice of being forced to buy someone a flat screen TV by the US government while dressing up as a secret service agent. 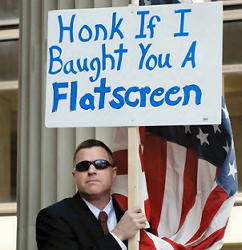 The hallmark of Barack Obama’s administration is probably its lack of “competnce,” which, unfortunately for this (smokin’ hot) right-wing protester is a word that means the opposite of “competence”: 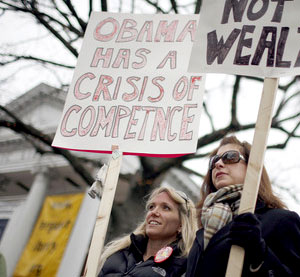 “Govemment” is how they spell “government” in Communist North Korea: 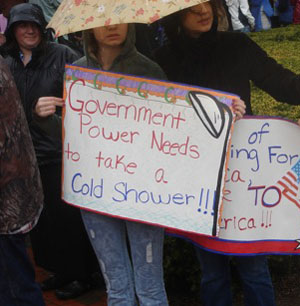 The ability to foresee the consequences of one’s actions, to plan ahead and prepare for future contingencies is one of the capabilities that distinguishes homo sapiens sapiens from the rest of the animal kingdom. It is also an ability that separates liberals from conservatives: 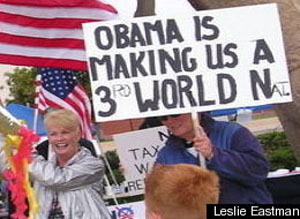 And lest you object that no website with the name “stinque” should make fun of the orthographical liberties taken by right-wing troglodites and conservative sorority girls, keep in mind that we’re not making fun of these people. We’re celebrating them… or better yet: seberlating.

We Asians might roll our Rs and Ls, but at least we can spell damnit!

ADD: And maybe not know the definitions of words or proper sentence structure, but we can at least spell.

Updated to include teh ahsom “descent” picture I mistakenly left out.

I’m really not looking forward to the upcoming snowballing protests.

And speeking of descent:

DEVELOPING SLOWISH: Over in NY-20, it’s beginning to look like the GOPer is gonna lose the count. Tea leaves (ha!) suggest that the last stronghold’s absentees have been counted, and he’s still behind.

Refresher — that district gave us John Sweeney (of Brooks Brothers Riot infame). Used to be blood red, and still could be if the stars align. That election was two weeks ago. And so even though they had themselves a time yesterday, teabaggers suck at life. Q.E.D.

(Incidentally, ManchuCandidate — or is it CandidateManchu? — can you provide an update on progress up there in Canada City towards picking up names that U.S. Americans can deal with? Is it a trickle or a flood of name-change applications? Inquring minds want to know. Kthxbai.)

STINQUE DISTANT EARLY WARNING: I think this may affect Bloggie only (if at all), but is otherwise an interesting case of FAIL — the NFL scheduled two home games for the Jets during Rosh Hashanah and Yom Kippur. Jets Fan is displeased. (Well, Jets Fan is always displeased. But still.)

But also: that Civony banner ad is FREAKING ME THE FUCK OUT. Nojo should contact some body, and start his journey now, my Lord!

@chicago bureau: And will all the Jewish players on the Jets roster be playing on those days?

As you know, I am a proponent of orthological variation whenever possible. If it was good enough for Shakespeare it is good enough for me. However, in this instance, I feel that it is a sign of general stupidity on the part of wingnuttia.

How do I explain the intellectual inconsistency? Thusly:

They are wingnuts. Like I’m supposed to give THEM the same break I give myself? Fuck ’em.

Thank you for your time and kind attenshun.

Our unique spelling is not orthographical heresy, but creative destruction in the name of capitalism. You can’t trademark a common word.

@chicago bureau: I’m chuckling at the local yahoos of a non-Stiller bent* who write in to our paper to complain about the “conspiracy” that gave the ‘burgh such a cushy season. Yeah, like last year.

*I live at the intersection of three Sport markets (Philadelphia/Pittsburgh/Bal’more) and all the fans of the Other Guys are known as “yahoos” in the ‘bisco household.

@Nabisco:
All stems from Bush Pioneer and Gillett partner Tom Hicks defaulting on his loans. Seems that buying sports teams with leverage isn’t as lucrative as it used to be.

Is that really a “govemment” or a “government” with the “r” and “n” too close together?

My mind tells me it could be either, but my heart tells me its “govemment.”

The ability to foresee the consequences of one’s actions, to plan ahead and prepare for future contingencies is one of the capabilities that distinguishes homo sapiens sapiens from the rest of the animal kingdom.

Funny (and true) story: I spent a year in Edinburgh in college, and lived in a flat with 11 flatmates. We each had our own room, but we shared one phone line (this was back in 1996, when cellphones and poor students didn’t mix). In actual fact, we would soon share a phone line — BT was molasses-slow, and hadn’t installed it yet by the time this story takes place.

One of my flatmates (but only for one quarter, since that was his minimum requirement) was a fellow of porcine aspect who I’ll call Steve. I’ve forgotten what his name actually was, but Steve is close enough. He was probably a football player, and appeared to have chosen Scotland for his quarter abroad requirement because A) they spoke English (or near enough) there, and B) whiskey was plentiful and cheap.

I don’t recall how exactly it came up, but I made the suggestion that perhaps we should invest in an answering machine for our one phone line, so that we would be less reliant on the occasional inaccurate written message from whoever happened to be nearby when the phone rang. We could share the expense, I suggested, and it wouldn’t cost much of anything, split 12 ways.

Apparently, this rubbed Steve the wrong way. He came in drunk late one night (as usual), and instead of doing whatever it was he did normally, passed into the kitchen and common area. My room was the last one before the common area, and so he passed my door. I believe the door was open, and he looked in. Drunken rage rising, he started berating me in a sort of general way. He didn’t like me, presumably because I wasn’t a beer-drinkin’ grunt-man like him, or something. Then, the true issue came to light: he was offended by the answering machine plan.

He uttered the priceless phrase, “We don’t do that kind of thing where I come from,” I think in reference to my ability to foresee difficulties and plan for solutions. The general sense I got was that he was offended by my very existence, but his choice of particular complaints was simply hilarious, in hindsight. At the time, I was pretty sure I was going to emerge from the encounter severely mangled by the gorilla-man in front of me.

My life became noticeably fuller and happier at the end of the quarter, when Steve packed his loincloth and wife-beater t-shirt (I assume) and went back to whichever southern hellhole state he came from. I’m sure he went on to a fulfilling career in the GOP or as a repeat-offending drunk driver or something.

Yes, planning ahead and foreseeing difficulties really is the exclusive domain of homo sapiens, isn’t it.

“You Librul Satanist you. You and yur thinking ahead and planning shit. Take your smurt ass back to Taxachussets or where the hell you’re frum…”

What people don’t get is stupid is often fatal. I was once accused of showing off my intelligence because I wanted to plan for things. What made things worse was that it was from my boss from a summer job who had an inferiority complex the size of the CN Tower.

@ManchuCandidate: I long ago made changes to my life that allowed me to surround myself only with people who aren’t offended when I exercise the moderate brains with which I was blessed. Diagram that sentence, if you dare!

@ManchuCandidate: Did someone say Satanist?

There’s even a new open-source zombification of the Bible that boldly asks: “For what is the Resurrection but a zombie story?”

Congratulations to Canada for mainstreaming us first.