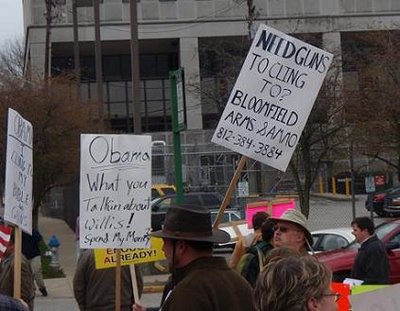 Usually when I want to write a blog post it’s because I’ve seen something so stupid that nothing else could top it that day.  If I post around noon, almost without fail I will see something stupider before All Things Considered  comes on at 4 pm.  But today is different.  There is so much stupid so early that I can’t decide.

1. George Will has written a 747 word column complaining about … denim.

2. Michele Bachmann claims the 6 Muslim guys thrown off a plane were on their way to Rep. Ellison’s victory party (hint – they weren’t).

3. Glenn Beck endorses Texas secession (actually, so do I).

4. BMW to offer its armored SUV to the general public, presumably for those dangerous trips to deepest, darkest New Jersey. 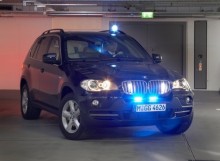 6. Another reason to hate the fucking Yankees.

LOLz! I love it when people misuse the symbolism of the Alamo.

Beck and the Retards probably think there’s a basement there.

Ooh, we should get one of those SUVs for when the Cannabal Anarchy arrives. Just cold cruzin’, shootin’ at the long pig…

Doesn’t Rush know that most are his listeners are fine with the shooting of black teenagers?

Shades of John Kerry “shooting a kid in the back” during the 2004 campaign.

In case you don’t recall: once during his service as a swift boat commander during the Vietnam war, while on patrol John Kerry spotted a Vietcong fighter with an RPG lying in wait by the river side to attack his boat. Kerry ordered the boat to shore, jumped out, chased the enemy soldier through the jungle and shot him. This action earned Kerry a bronze star.

During the campaign, however, it became “shooting a kid in the back” and was described by right-wing commentators as a cruel act by a man who should simply have just let this poor RPG toting soldier slip into the jungle so he could blow up the next boat coming down the river.

@Jamie Sommers: Yeah, talking about secession and becoming the Republic again while standing in front of the Alamo is kind of teh dumb when the Mexicans kicked the Anglo slaveowners’ asses at the Alamo. Here’s my martini fueled rant from last night about the Texas secessionists.

@Jamie Sommers: Did you know they moved the Alamo? The Car Guys said so – it used to be waaaayyyy out in the country, so they moved it downtown. Tom and Ray almost got arrested trying to move it back with a tow chain.

I noticed the guv was speaking at a lecturn lectern (fucking orthographic nazis) with a sign that said “Don’t Mess With Texas”. Isn’t that an anti-litter slogan?

6. Another reason to hate the fucking Yankees.

Wait. You need a reason?

(I’m calling BS on this one, incidentally. I know that NYPD guys may not be the most culturally hip guys in the room, but arrest/ejection for going to the bathroom — and not pissing in the seating area? This is behavior to be encouraged in New York City, don’t you think?)

@chicago bureau: Deadspin was all over this last year – I guess Steinbrenner is REALLY strict about observing the whole “God Bless America” thing. Or so was their angle.

@SanFranLefty: I would love it if the George W. Bush Presidential Librarium were on foreign soil.

homofascist: I refuse to believe that this was the only rap on this guy. I’ll bet $10 that he was just drunk and slurring and stumbling (as Sport fans are wont to do from time to time), and then bumped into a cop (as it happens, during the middle of the seventh), and now wants to trump it up into a First Amendment / strict scrutiny / compelling governmental interest protected by narrowly-drawn provision right to pee.

@chicago bureau: He was at a Yankee game. That is enough for me. Book him and cook him.

(Note: read through the NYCLU complaint. He had two beers. That could get a small guy totally blitzed and rude/nasty. And by small, I mean 4’10”, 90 pound, gymnastics-star small. There may be some credibility to this lawsuit after all.)

@chicago bureau: Geeze – did someone kick your dog?

And did everyone click through and look at the door on that BMW? Holy shit – it looks like it would stop an RPG. I can’t wait to see some Upper West Side mom tooling around in one.

And may I also say that there is a plague in my neighborhood. Late fiftyish, early sixtyish guys with ponytails wearing Chuck Taylors. It is not pretty, and it needs to be stopped.

@SanFranLefty: *sniff* That was beautiful! I’m getting all choked up over here.

@SanFranLefty, jamie: I asked Albuquerque congressman Martin Heinrich via his FB page to introduce legislation to let Texas just fucking go. He was looking for gifts to give his 6 year old kid back home. (One of two main reason I quit politics – separation from family.)

@redmanlaw: Only if they take Oklahoma. Dumbest congressional delegation on the planet.

@blogenfreude: But do these guys have what I call the “PBS ponytail” – you know, receding hairline, thin on top and sides, gathered into a straggly ponytail? Normally seen on liberal 50 something white men working at PBS pledge drives.

@Jamie Sommers: Anytime, darlin. I was getting all homesick for Texas what with Fiesta going on right now, and jonesing for some barbecue from the Salt Lick and bean-and-cheese burritos from Taco Cabana, and then dumbass Governor Good Hair had to open his mouth and Ted Nugent showed up in front of the Alamo.

Check this out. I love the “justify your being here” signs.

@Jamie Sommers: a la Seinfeld, I would say ‘No Poop For You!’

@SanFranLefty: Exactly that sort of ponytail. It is an abomination. Chucks … don’t they need arch support at their age?

@Jamie Sommers: Well, that’s at least two days of Twitters for me.

“Please refrain from going to Big Toilet, for there would be trouble ahead.”

My life in a nutshell.

@blogenfreude: Low or high-top? Because you’ll pry my low-top Converse off my cold, dead, feet.

@chicago bureau:
Just turned on the tube (I work at home and am done for the day.)

I’m not bitter that AJ jumped to the Yanks. Not one bit…

@Jamie Sommers: OMFG, I’m totally going to go check out this place on Sunday after my soccer game in Shallow Alto.

@nojo: High top, usually red. One guy had pink. And they’re usually slow-walkers too. I think I saw at least three last weekend.
@ManchuCandidate: I love it. I have to deal with Yankees fans all the time – one is also a Cowboys fan. I want to Steinbrenners to froth at the mouth. HAHAHAHAHAHA!

@blogenfreude: Oh dear gawd. Black or white or no deal.

Unless you’re a chick.

My environs abound with the biker look. Thats the upper crust in my area of Joisey; then there are the ones with prison tattoos.

I am growing fond of the Civony ads. They are teasing me; sometimes, the young lady’s chestal area is chastely covered, though ample evidence of hidden bounty is present; while in other ads, acres and acres of her rolling hills are exposed. And she refers to me as “My Lord,” which is nice.

SanFranLefty: I’ll thank you not to refer to Palo Alto in such terms ever again. Hayweird? Yes. Freakmont? Yes. Shallow Alto? No.

(Proviso: if University Avenue still is populated largely by things that scream “nouveau riche yuppie scum” and nothing that suggests “actual honest-to-God college nearby,” then Shallow Alto may still be used with my blessing.)

(No kidding, kids — during my four-year tour of duty at the Farm, I maybe went to University Avenue… twenty times. The Stanford Theatre showed old-run movies, which was nice enough. And that… was just about it.)

@nojo: The monsigneur at the basillica here wears his pink CTAS when walking his chihuahuas. Mrs RML rocks the black CT hi-tops.

@SanFranLefty: How about “the NPR voice” that all the dudes have that make them sound like the teacher from Beavis and Butthead?

@chicago bureau, boring to all others:
It’s still Shallow Alto to me, and the few affordable college-type shops or restaurants on University Avenue are all gone and replaced by boutiques catering to insufferable late 3os women (who spent their 20s living in the Marina District before they married a dot-com nerd) in yoga pants who are married to dot-com billionaires and don’t work but have two full time nannies from Bolivia. Recession hasn’t hit hard enough yet around Stanford. The Theatre is the only thing worth a damn on University Ave., but the Castro Theatre in SF is even better.

At least Antonio’s Nut House on California Ave. is still in business. Along with the Alpine Inn (aka “Zott’s”) in Portola Valley, it’s about the only refuge on the Peninsula for people who swing a hammer for a living. My favorite Peninsula dive bar from the ’40s was renovated last year and ruined when it was turned into some sort of chi-chi VIP place.

/walk down memory road of drinking on the Peninsula

@SanFranLefty: When I was in college in the mid to late 80s (to finish after dropping out twice from two different schools) a beer in a bar was an unthinkable luxury. I’d go out about one Friday night a month with my <$10.00 and fill up on a couple of cheap happy hour drafts and awful free popcorn. I do have a fond recollection, though, of being awakened at 1:30 am in the middle of the week by a friend pounding on the door of my basement apartment in Albuquerque looking to pool change to get a late night 40 at the package store down the street.

Perry joined state lawmakers in showing support for a Texas resolution championing states’ rights provided for in the 10th Amendment of the U.S. Constitution. He voiced support for states’ rights again Thursday. He also defended freedom of speech to a room full of journalists.

“This is America, baby. First Amendment. We like it too, as well as the Second and the 10th (amendment),” he said.

Why can’t he just STFU and go back to perstorking his male aides in the Governor’s Mansion?

@SanFranLefty: Geebus, what the fuck? Somebody needs to tell Goodhair that there is already a sucessionist running for governor next year.

ADD: On the bright side, that “baby” reference makes me think there might be hope for a Claytie Williams Part Duh fiasco if KBH takes him on next year.

@Jamie Sommers: KBH *is* taking him on, and I think that the the ladies who lunch in Dallas and Houston who voted for Ann over Claytie will do the same thing in the primary. Plus every Democrat I know is going to vote in the GOP primary (open primaries, baby) to vote for her. Including my mom, who is a big liberal but has voted for KBH every time.

@SanFranLefty: She’s really gotta get the EMILY and WISH lists out in muthafuckin force because you know Goodhair will squeeze every last vote he can out of the inevitable Osteen/Baptist/Evangelitards Megachurch Tour ’10.

@JamieSommers: Yeah, but Kay Baby choked on sticking to her guns and principles and staying a pro-choice Republican once she hit the big time.