Stinque
Home Latest Comments Log in
If it smells, we’re on it.
Stinque
This is America.
Gotterdammerung

When Did Jesus Get a Gay Hairstylist? 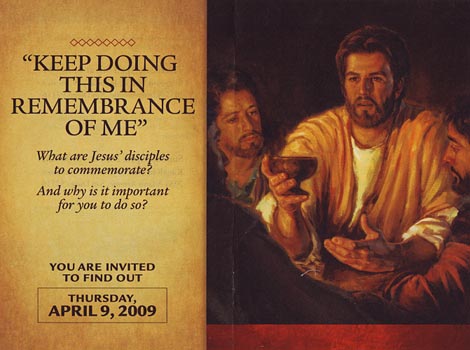 Flyer from the Jehovah’s Witnesses found stuffed in our door Saturday morning. Either that, or the Doobie Brothers are on a reunion tour.

See, I’m getting more of a Michael McDonald vibe…..

ADD: Google is generating “Lesbian Romance” ads for me. Anyone else?

@SanFranLefty: No, but that would go well with the “How to make electricity” ad that I’m getting.

@SanFranLefty: Google just wants me to buy a Ford. Thanks, libertarian tool.

@SanFranLefty: Oh, there it is.

Guess this is what happens when you block the Coulter ads.

Is it just me or is there a trace of the Hoff about Jeebus?

@SanFranLefty: Well, screw it. That middle Google ad was only mildly amusing when it was the only Google ad on the page, and now that we’re running the Google Tower as well, I’m seeing too much annoying duplication.

And since Google pays for shit (MSNBC was beer money at best, but it was something), maybe I’ll have some additional incentive to deal with the tee business, and run those in the left column.

Or maybe coffee mugs. I can’t bring myself to run tees through Cafe Press (they suck), but I don’t necessarily have a problem with non-tee stuff. Tees will eventually run through Printfection, but that involves more setup to get started.

So let’s start with the path of least resistance. Other than tees, what kind of Cafe Press crap would anyone be interested in buying? If I set it up, I’m going to price things to sell, maybe with a dollar markup for beer money. If you simply had to have a Cannibal Anarchy tschotchke, what would that tschotchke be?

@nojo: The ever popular thong.

@nojo: you expected a straight answer out of this crowd? I go with FCS suggestion.. with an upscale version with titanium blade and mother of pearl handle.

Trained as an art historian, of course societies have always made the image of the Savior something the masses/villagers would empathize with so this would be a consistent extrapolation of that tradition. I have seen other similar images of the “modern white JC” on religious literature.

@SanFranLefty: Crap. I, want the Lesbian Romance ads. I never have any fun. The goog is trying to sell me Adult Active Condo Communities. I am neither adult, active or that into community.

@nojo: Glow in the dark, signature, scratch and sniff condoms. I’d by a couple of cases for my kids.

@Mistress Cynica: Myabe it’s my fault. Maybe I can get it to switch to selling Bentleys with yet another post. OTOH – do you suppose Bentley buys GoogleAds? I think not.

@nojo: Can you get Faux News ads like the MSNBC one? That would be fun…

As for tchotchkes…given this crowd I’d say shot glasses, beer mugs, and martini glasses with the logo. And coffee cups for the next a.m.

Oh, and glow in the dark condoms.

@Mistress Cynica: If you would just buy one they would go away.

@nojo: If you simply had to have a Cannibal Anarchy tschotchke, what would that tschotchke be?

@libertarian tool: No they don’t – I have Netflix, and I get slammed with their ads every day.

@libertarian tool: That only encourages them. Capitalists are never satisfied.

@Tommmcatt the Wet Sprocket: “If I hear I’mo be there one more time, I’mo burn this place down.”

Am I the only one here who is hopelessly in love with that movie?

Can a scythe be combined in a graphically clever way with the double-fun pastime of mocking dim-bulb wingers? A Dim Reaper perhaps?
Maybe on an NPR-style tote bag, only with an interior holster?