Stinque
Home Latest Comments Log in
If it smells, we’re on it.
Stinque
Assholes, they do vex us.
About Fucking Time

And So It Begins 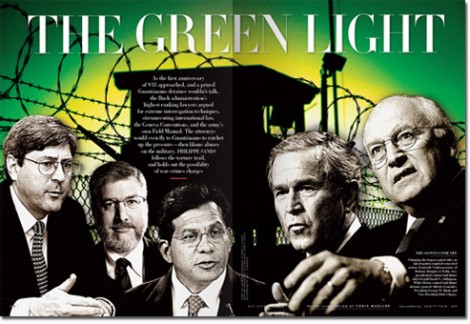 Eric Holder better get his ass in gear if he wants a crack at everyone’s favorite war criminals:

MADRID, (AP) — A Spanish court has agreed to consider opening a criminal case against six former Bush administration officials, including former Attorney General Alberto Gonzales, over allegations they gave legal cover for torture at Guantanamo Bay, a lawyer in the case said Saturday.

Human rights lawyers brought the case before leading anti-terror judge Baltasar Garzon, who agreed to send it on to prosecutors to decide whether it had merit, Gonzalo Boye, one of the lawyers who brought the charges, told The Associated Press.

Gonzo can’t get a job, so maybe he could do some jailhouse lawyering once he gets to The Hague.

E-mail requests for comment left with Yoo and with Feith through his Hudson Institute address, and a phone message left for Yoo, were not immediately returned.

Even if indictments are eventually handed down against the U.S. officials, it is far from clear whether arrests would ever take place. The officials would have to travel outside the United States and to a country willing to take them into custody before possible extradition to Spain.

The officials are charged with providing a legal cover for interrogation methods like waterboarding against terrorism suspects at Guantanamo, which the Spanish human rights lawyers say amounted to torture.

Even if those accused are never tried, it would still make me smile to think of them worrying every time they went abroad.

Boye said he expected the National Court to take the case forward, and dismissed concerns that it would harm bilateral relations between the two countries.

He said that some of the victims of the alleged torture were Spaniards, strengthening the argument for Spanish jurisdiction.

“When you bring a case like this you can’t stop to make political judgments as to how it might affect bilateral relations between countries,” he told the AP.” It’s too important for that.”

Boye noted that the case was brought not against interrogators who might have committed crimes but by the lawyers and other high-placed officials who gave cover for their actions.

“Our case is a denunciation of lawyers, by lawyers, because we don’t believe our profession should be used to help commit such barbarities,” he said.

Another lawyer with detailed knowledge of the case told the AP that Garzon’s decision to consider the charges was “a significant first step.” The lawyer spoke on condition of anonymity because he was not authorized to talk to the media.

There was no immediate comment from Garzon or the government.

While I love the thought that these asshats might be put away, I just don’t believe we really live in a world where that can happen.

@IanJ: Sure it can. Think Stinque Commandos and extraordinary rendition to Barcelona. Gaudi, anyone?

a country willing to take them into custody
Which is pretty much everyone except maybe Israel and Paraguay?
I have to go out and buy some olive oil, manchego cheese, and dry sherry to show my support for our brave Spanish comrades.

No worries. Black Eagle will take steps to aggressively defend and protect any and all prior administration executive branch criminals, including possible declarations of war and invasion of any country that attempts to arrest or detain any of the above. The principle of Unlimited Unilateral Executive Power is simply too important to be compromised by niceties like international law.

Anyone watching the UNC v. Okla game? Well-played, so far.

@libertarian tool: You are right. Saddens me, but you are.

@Dodgerblue: UNC seems to fill the
zombie role comfortably, Get a bit of a lead, then start tearing off limbs and such while your opponent: Sooner or later struggles in vain. Don’t
try to (heh!heh!) save face.

@blogenfreude: @libertarian tool: Spain had Pinochet in custody, fer chrissakes, and couldn’t put him away.

@EffeteHipster:@Dodgerblue:
Stinque Bracket Update –
If no one puts a stake through the heart of the UNC bloodsuckers, MellBell is the winner of the Stinque pool and I get second. If Nova, UConn or Mich St can field a starting lineup of Milla Jovovich clones, then Lefty wins.

@EffeteHipster: Does anyone else think that UNC’s Tyler Hansborough looks like a very, very large Hobbit?

@Hose Manikin: Man, we should have put money on this. My potential winnings could make up for the income drop around the house. What happened to Cynica? I thought she was going to run away with the tournie.

@Dodgerblue: Or the giant from Princess Bride?

@SanFranLefty: Cynica foolishly chose Memphis out of sentiment. Typical of my brackets–I do well in the early rounds, and it all falls apart in the Sweet 16.

Maybe it is time we consider sending these folks, just for shits and giggles, to North Korea.

No prosecution except an American prosecution will ever be considered legitimate. Just a fact. And if we don’t prosecute, or in some major way condemn and disavow their actions, we will have a hard time ever being seen as legitmate again. Another fact.

And as leftist as I am, the fact is that sometimes you have to protect a douchebag in order to protect future, and past, non-douchebags. By which I mean its a legitimate principal to say that a US president should not have to fear other countries unilaterally declaring them criminals, nor should they have to take that into consideration when considering the protection of the US in a crisis.

No matter what an american president does, some country somewhere will consider it criminal. Spain is right, in this case, but if their authority to do so is accepted, then we will have to deal with how many more situations in which the charges are bullshit.

I say this in the same way I defended Clinton and said, over and over, he should not be subject to civil suits while president, and certainly should not have been subjected to the Starr inquisition. Even though he was wrong, if you allow it, it becomes a tool for your political opponents, and in the international arena, a tool for your enemies to harrass you.

We have to do it, if it is to be done. It must be us. Its the only way we can clear our name, as a nation.

And also, as well, this Spanish prosecution is not gonna build support here in the US for an investigation and prosecution. The British investigation thats just been green-lighted is one I think much more likely to add to the public’s perception of the legitimacy of a US investigation. The Brits are our special friend, they are not swarthy, they speak English even.

@Promnight:
“They speak English, even.”

With those accents, no less.

@Promnight: I’m still ready for a remake of Judgment at Nuremberg. Who’d be our Marlene Dietrich this time?

@libertarian tool: If I publicly slit my throat and then bleed out into a “Ron Paul 2008” faux-straw hat, will that be enough to lift the curse, and remove from me this crushing burden of guilt?

@Hose Manikin: If anyone ever fielded a starting lineup of Milla Jovovich clones, you’d be reading about me in the morning paper. I’d be forever hence known as “the naked guy who laid down at center court and disrupted the playoffs”
There is everything about the juncture of that woman’s legs that drives me to a rutting frenzy. Not sure why, maybe Jung could explain.

@Promnight:
There will never be criminal convictions in the U.S. for anyone in the picture headlining this post, and likely no prosecutions. For any executive in power (douchebag or non) the risk of erosion of executive power is obviously much greater from domestic action than international action. International action can be easily ignored for all the reasons you outline. Since the Justice Department is part of the Executive branch, I don’t expect any but the most cursory investigations to emerge from that office.

I am not looking for convictions or trials. They just won’t happen, so they won’t help. I would like to see a version of the ’75-76 Church Committee. The revelation of abuse uncovered and made public by that investigation fueled enough public outrage that Congress was finally forced to act. Much good came from that investigation, including the FISA court and protections, which stood us well in the last 40 years or so – that is until it was gutted by legislation that Barry could have torpedoed, but instead supported.

Perhaps the Leahy initiative will be the catalsyt.

@Ewalda:
I’m sure I don’t know what you what you mean.

@Ewalda:
I’m not much of gamer – so felt I could safely ignore the Resident Evil franchise. While waiting for year two of BSG to arrive from Netflix, I recently watched one, then two and three inside of a week. I understand your affliction. These are truly bad movies, and there is no reason to watch them except MJ. Now that I think about it – the same thing could be said about The 5th Element and Ultraviolet. Has any one actress ever starred in so many incredibly bad but successful sci-fi movies? You’re right – there must be something more here. She must be tapping into some Jungian archetype.

@libertarian tool:
I think you meant “30 years or so”

@Ewalda: @Ewalda: @Dodgerblue: I couldn’t identify any Tolkien character by sight, no-how. (I’ve lived a sheltered middle-age.)As for Milli Jovovich clones, I know you’re not going
to believe this: I never heard of her before today (well, yesterday now). She
is an attractive young woman no doubt, but I’d like to field a starting lineup consisting of Lisa Leslie clones. For personal dalliance, Lucy Lawless is more to my liking. Or, WTF, Queen Latifah before BRS. There, I’ve said it: my sordid secret’s out.

They might disbar Yoo, though, that would be nice.

@Prommie: It takes a lot to get disbarred in California. Don’t count on it.

@SanFranLefty: A state where Ken Asshat Starr runs a law school has nothing to be proud about.

I do? How clever of me! And to think I have no idea who Leo Durocher is!

@Tommmcatt the Wet Sprocket:
Chicago Cub manager in 1969. This LINK should help. It’s a compliment. Sort of.

@redmanlaw:
I thought the Aeon Flux animations were great. Didn’t see the movie because I couldn’t picture Charleze in the role and understood she wasn’t wearing the Aeon Flux thongy thing – so – you know – whats the point. I will pick it up on your recommendation.

@EffeteHipster:
No one approaches Milla’s track record of zombie annihilation.

@Hose Manikin: Did you also watch “The Head” (which came on either before or after “Aeon Flux”)? That show was weird, but enjoyable.

@mellbell: I forgot about “The Head”. I watched it due to the proximity to Flux. Agreed. As the guy I linked at GWG says “…there was a time when watching MTV could actually be interesting occasionally…”

@Hose Manikin: Didn’t that end after the second year of 120 minutes? Although I did enjoy this batshit crazzee Brit who did an evening show on MTV Europe around 94ish.