Stinque
Home Latest Comments Log in
If it smells, we’re on it.
Stinque
This is America.
Y'Obama

There Go the American Idol Jokes 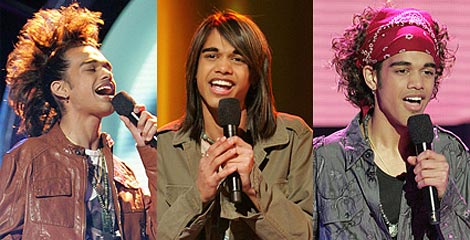 The woman in the middle is hot…

Don’t care for the other guys.

What? That’s a dude?

Stop teasing him. I’d hit it.

Was it for this that clay grew tall?

T/J Horton Foote died yesterday at the age of 92. OK . Hands up who knows who he was?

And no, you may not check wikipedia.

I know who he was, but I have an advanced degree in that subject so it doesn’t count.

@Benedick:
No I do not know. (See, engineers can admit ignorance!)

Note: I know now, but because I wiki’ed him.

@Benedick: I did. He wrote the screenplay for my favorite movie.

@Put a Tommmcatt in your tank!: I’d hit it too.

@SanFranLefty: Baby the Rain Must Fall?

Why isn’t that little horrorshow still around? Aren’t his 15 minutes up? Civilization can’t take much more of this shit.

@SanFranLefty: Movie? Pardon me. No. He was a playwright. He wrote many plays. Movies are a pale simulacrum of the theatre. It used to be that a basic knowledge of the literature of the theatre was a prerequisite of the educated American. Now we are lost to ignorance and rich people throwing parties.

The theatre is older than religion. Older than philosophy. And we are left now begging for pennies. All of you are now experiencing what we have had to live through for the past 20 years. Ever since the RNP reckoned they could use the arts to eviscerate the left. And no one came to help us.

We go out into the world with no funding and no popular support and we show the rest of the world what is best about America and it’s about time we got some fucking support and fuck Sport. The fucking opiate of the mindless.

And you will forgive me, my darlings, I seem to have lost my temper. But welcome to my world. Now you can deal with it too. I don’t wish anyone hardship: I take no pleasure in welcoming you to a world I have known for years. Live on nothing? Easy.

Darling, he also wrote the screenplay for To Kill A Mockingbird.

Poor, dear theatre, my first love, and my first heartbreak. I really admire you, Benedick, for sticking with it. I worked in it for about 10 years, but the poverty of it all got to me in the end…

@Benedick: I tired of Sport and stopped paying attention to almost all of it years ago, yet, somehow, I didn’t ramp up my live theatre consumption.
I must beg forgiveness. I am a reader of plays. I know, plays are not alive until someone performs them, yet there it is. I read plays. I don’t go out to see plays anymore.
I don’t go out to see Opera anymore, either, though I love Opera.
I still am a SFSymphony subscriber and donor. And I attend Symphony performances ~15 times a year.
I read compulsively, as I have since childhood. I know that is not the same thing as supporting live Arts.
I am a weak and impure mortal.

Someone please say something.
I’m afraid I broke Stinque.
Sorry.

I’m going to drink too much and cry myself to sleep. Sorry.

@Ewalda: It wasn’t you. If this posts.

@Benedick: I only knew him from “To Kill a Mockingbird,” which is one of two screenplays based on books I loved that I also love. If that makes sense. I’m really tired. The other one is Emma Thompson’s Sense & Sensibility.
Living most of my 48 years in arts deprived areas like OK and SC has limited my exposure to anything but the war horses and touring musicals. I do know the words to every song in “Oklahoma!”

@Benedick: You know, vis a vis the theater, I have read those war books about POW camps during the WW II, and always, they spoke of the prisoners putting on plays. Isn’t that wonderful? That was back when the theater was a living art, and their were enough people who knew it, that they would write and produce their own plays, when deprived of the professional product.

Its kinda like when in old movies, at a party, or even, when people were stranded somewhere, stuck somewhere by weather, there was always someone who knew how to play the piano, and everyone would sing and dance.

Noone can do these things anymore. I think its television, people have become, when it comes to entertainment, just passive receivers, they no longer are capable of entertaining themselves.

Take a look at the video I just put up … frightening.

@Benedick: Living in the lives of the masses, I meant, Benedick, oh, it is all you say, magically so, of course, but I meant its place in the culture.

@Benedick: You are right, noone did defend the arts, noone. Well, everyone on, and who listens to, NPR, bemoaned the defunding of the arts, but whinging isn’t really action, is it?
And as you say, the pigfuckers hate every aspect of civilization, they hate the arts, they hate government, they hate learning, they hate thought itself. They are like a mongol horde arising from our midst to destroy higher civilization.

@Promnight:
Hey now! Mongols actually have a culture. Otherwise, your analogy is apt.