Stinque
Home Latest Comments Log in
If it smells, we’re on it.
Stinque
Lovely day for a Perp Walk.
Psychogeezer

John McCain Mavericks it Up (sigh) 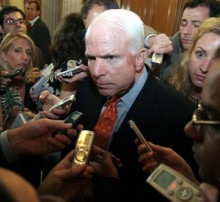 That’s Sarah Palin’s failed-VP choice, John McCain, on the stimulus bill and the state of the failed Obama presidency. It’s one of the many attacks Republicans have made against Obama because his bill failed to deliver on his bipartisan promise, because even though the bill was cut to please Republicans, and included a whole bunch of completely useless taxcuts, none of them voted for the package. Barry even invited those fuckers over to his house for beer, but apparently that didn’t count as sitting down together.  So, let’s impeach him, cut some taxes, and move the fuck on.

John McCain is right. He must be, because he saved the economy once already, back when he suspended his presidential campaign to sit silently at a table with other important people, thus rescuing America until it was ruined again by Barack Obama, the darkie scourge of Wall Street (black people: no good with money).

So, to sum up. President Obama promised us bipartisanship. He made several efforts at reaching out to Republicans (including offering Secretary of Commerce – whoops). Our toddler Republicans have given him absolutely no cooperation, even though the stimulus package concedes several major issues to them (bye bye education funding!). It will pass anyway, everybody will get some of what they want, and Obama is an abject, horrible, failure of a man and John McCain is the nation’s only honorable man. God Bless America and John McCain.

No wonder PG has been in so many plane crashes/shootdowns . He doesn’t recognize the Flat Spin the Repubs have found themselves in.

So… Obama was not working together with repubs, and Americans want you fuckers to work together? Or something? Someone get gramps his Alzheimers meds (oh, wait, there aren’t any? Damn, who cut that healthcare spending again?).

@IanJ: Gramps has the meds; he just can’t remember which house he left them in.

Anybody catch Alexandra Pelosi’s new film “Right America: Feeling Wronged” tonight on HBO? You want to see who is dead set against change in this nation, much less in the whole world, this is the place. I’ll tell you, there’s more anger in these people than we can imagine. One guy flatly told Ms. Pelosi that if he had his way African Americans and women would still not be allowed to vote. A lot of people said America is not ready for an Obama presidency.

The funny/sad thing is that they don’t understand those of us who consider ourselves progressive any more than we understand these people we think are living in the past. There’s almost no common ground between us, no shared frame of reference. In their world view the white Christian men run everything. That’s the way it was and is and always will be. There is no other option.

Sadly Obama is not reaching these people. I don’t know if he ever will because they’re not willing to listen. The final shot at the McCain election eve party tells the whole story: in Grant Park new President-elect Obama was reaching out to them but nobody was left to hear him.

@Dave H:
Sounds like they’re the ones who really are Left Behind.