Barry In The House: Live! 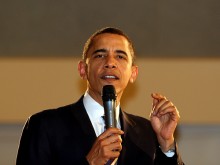 Well, well, well.  Let’s see what he does under light-to-moderate pressure.  White House Press Conference — with a guy who can actually respond in English!  With commentary from YOU!

1956 (ET): The story so far?  Cloture in the Senate today, biggish vote tomorrow, conference committee speed round thereafter.  Or something like that.

2000: Barack Obama has won the toss, and will receive.

2002: Anyone here got recon on why Elkhart is sucking wind worse than anyone else in the nation?  15%+ unemployment blows.

2004: Ronald Reagan doing backflips in his grave right about now with the “government is the only solution” bit.

2014: This answer to the first question is taking forever.  The ramble moves into TurboTax’s plan tomorrow — a place where one ought not go.

2016: Iran question from Reuters.  He looks kind of off balance at first, but rolling into the whole nuke thing.  Something tells me this answer is going to be [somewhat] in-op tomorrow, after Bibi takes it down in Israel on account of mysogynist Israeli voters going for the Inadequate Fat Male.

2020: “It’s gonna take time.”  But he’s stepping on the gas nonetheless.  Hmm.  Oh, and that third cabinet dude wasn’t exactly your plan, on account of Senor Itchy bailing on you.

2023: He’s playing the whole Republican non-cooperation thing wrong.  He’s inviting people that have no interest in signing up.  But also: blaming Bush can only go so far.

2024: No earmarks?  Again?  There could be some fact checking on this that can bury this guy.  Danger!

2026: Kind of getting snippy here.  And we are on Question No. 3 and 16 minutes of responding (and counting).  This may take some getting used to.

2027: Notably — nobody has asked for a follow-up question.  No need for same.  Interesting from Chuck Todd — munnie to pay off the credit cards not being Change We Can Believe In.

2030: I’m thinking the phrase we’re looking for is “law prof.”  Taking the questions and turning them around.

2032: Americans not engaging in long-term financial planning.  No shit.

2034: Barry’s thinking that he can ride the whole “corporate jet” thing to get TARP III: The Search For Credit passed.  And oooh — delegating to TurboTax.  If that goes south?  Watch your freaking back, Tim.

2036: How will success be measured?  Dubya would have shrugged, smirked, and said something along the lines of “believe me.”  Barry puts a number on job creation, credit loosening up.  And, of course, the health and well-being of Elkhart.

2040: Ooooh, the Dover question.  And Barry…. dodges.  Darn.  In re Afghanistan timetable?  Another circumlocution.  Which may or may not be understandable, but still somewhat less than satisfying.

2047: Barry hasn’t called on Helen Thomas yet.  And she gets passed over for a question about A-Fraud.  Oy.

2048: Oh, there’s Helen.  Actually gets off half a good question (in re Pakistan) and one where she could do some research (who has been set up the bomb).  To the content:  blah blah I have no clue how to fix the safe havens without invading Pakistan blah.  But also: nukes are bad.

2052: HuffPo gets a question?  We are down the rabbit hole now.  And putting him on the spot on going after Bushies, too.  Well played.  And the response?  I’m underwhelmed with the whole “the past is the past” thing.  And yet: “nobody is above the law.”  The door’s open a crack, but the carpenters are coming in next week.  Shoot.

2057: I don’t know if the whole “the Republicans ran up the budget” thing is registering Out There.  Would be wonderful if it did.  But still.

2103: And they are going off on how it looked.  Which means they have nothing left over at MSNBC.  Interestingly enough: neither do I.  Say a prayer tonight for those poor miserable wretches in the Elkhart metro area.  Laters.

Ok, I get it. Jobs. But how will you make them?

So, we’re in questions. Did he actually say anything?

Rip their faces off, Barry! Ask the fucking reporters to join you in a rip-roaring rendition of the Internationale!

I got a feeling US America will be going thru this AGAIN in a few months, but hopefully the “reasonable” “centrists” will STFU and let the “socialist” agenda pass without much comment unlike the dipshit McGoo Repugs and their MSM concern troll lap dogs.

My Gawd, he speaks in complete paragraphs and doesn’t sound like he fell off the turnip truck or the short bus. Such a lovely change of pace from the prior 8 years.

Give them all the finger, Barry. Tell them, “OK, assholes, we’ll have it your way. Let the banks fail. Let the Chinese call the notes, show up and carry off all of the cars, cigarettes, women and alcohol. Let everyone starve and riot and burn cities and cannibal anarchy reign. Didn’t I didn’t tell you so, assholes!”

@FlyingChainSaw: He needs to say “Do not mistake kindness and manners for weakness, ASSHOLES!”

Chuck Todd is such a fucking moron. I love the “Bish please” look Barry gave him.

FCS is on FIRE again….

@SanFranLefty: Paragraphs nothing, those are freaking term papers! Law prof is right, CB.

@flippin eck: Total law prof. I’m so jealous of the Chicago Law grads I know who had him as a professor.

Makes a joke at Plugz’ expense.

@SanFranLefty: Yeah, and say it while he is pounding one their heads off of a table.

WTF?! A question about A-Roid?

Blame it on Shrub, the former “owner” of the Rangers.

What is going on with the fleece vest she’s rocking?

Is it just me, or is the way he’s calling on reporters is kind of odd?

HuffPo gets a seat with the big boys?

I’m still at work; are they covering anything new or is it all refried?

@ManchuCandidate: At least it wasn’t Arianna.

Moira Liason (spell?) of NPR – I’ve never seen her before, just heard her a million times. She has teh krazee eyes!

What is this obsession with bipartisanship? He held out his hand and the Repubs bit it off. The End.

Oh praise FSM, he knows how to correctly pronounce the word nuclear.

@SanFranLefty:
She probably would have flirted with him like she did with Jon Stewart and Stephen Colbert.

Night all. Mentally and emotionally drained this evening.

@JNOV: Hang in there, sister.

Barbara Boxer to be on Rachel – this will be fun!

OK, in from the commute (15 minutes) and dinner at mother in law’s (real organic Colorado beef meatloaf, y’all. ) On the stuff he answered, good job. Body shots to traitorous swine of previous Congresses and the late unlamented administration, yay. On correcting the flawed premises of questions from the first reporter and Chuck Todd, about time.

Evading questions on Pakyston, and Biden – needs to get better. But I tell you what, I listened to every word in the car and at my mother in law’s house where it was on already. I would have liked him to have dismissed the A-Rod question as trivial but First Sport Fan at least did something with it on the value of integrity and of how A-Rod’s reputation went to the gutter (with the reporting last week on Joe Torre’s new book as the lead in for all that).

Elkhart calls itself the RV capital of the world. Apparently people who have already lost a job or think they will lose a job aren’t spending much time shopping for that new RV. $4 per gallon gas followed by this economic shipwreck has killed the industry.

I’m impressed. I was able to watch the whole thing.
The man speaks clearly and in complete sentences, with nary an “uh” to distract.
What world is this?

@Ewalda: It’s half-way to bizarro world. We have a well-spoken president who’s half-black and appears to have some brains. But we’re still suffering from the idiocracy that preceded him, so our half-black prez gets to do some serious spade work before he can do any of the fun stuff.