Stinque
Home Latest Comments Log in
If it smells, we’re on it.
Stinque
Assholes, they do vex us.
God's Will

Republicans Still Adjusting to Their Role as the “Party of No” 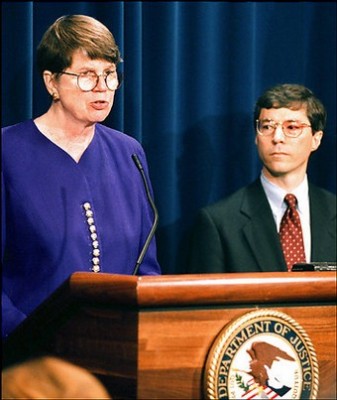 David Ogden (that’s him in the picture, on the right), who President Obama has nominated to serve as deputy attorney general, is under fire from Republicans because, in the words of a former Bush Justice official:

Ogden has been an activist in support of a right to pornography, a right of abortion and the rights of homosexuals.

This is an extremely radical position of course, since the first two of those three things are rights we definitely already have. And even most of the Neanderthals who are against gay marriage use cryptic language about the sanctity of marriage instead of declaring themselves against “the rights of homosexuals.”

Much of the opposition comes from the religious right, who apparently, amazingly, still exist and are allowed to contribute to the national discourse.    They do not like Ogden’s former defense of Playboy, which shouldn’t even count as pornography since you can’t make anything out through the thick veneer of airbrushed silicon.  Also, one entertaining blog post decided that Obama  shall now be known as  the “abortion president“, then went on to criticize his choice of pro-Choice Ogden at the same time it lambasts his re-authorization of the Children’s Health Insurance Program. Because the only thing worse than reducing unwanted pregnancies is helping to get medical care for the babies we already have.

Whatever. Ogden’s still going to get his job, since Obama always gets things he wants, unless those things happen to wear dopey red-rimmed glasses.

Plus, I know the real reason Republicans don’t like him.  During his hearing, Ogden also said:

At which point forty Republican Senators decided to vote against him as they surreptitiously closed their laptops and slid them under their chairs.

They have nothing else to do but regress even further.

I can confidently predict that the Repubs will be reduced to throwing their feces by the end of next month.

Never leave a question about the right to pornography in the hands of a high school spelling bee winner. That is where that photo is from, right?

Even Faux is having a hard time in today’s hobo economy.

I just watched a few minutes of the lame joke that is the Senate “debate”. The same Republicans who giddily tossed the keys of the Treasury to Haliburton and Lockheed Martin and AIG and anybody else who contributed enough are suddenly horrified about increasing the existing deficit. The same deficit they personally did so much to inflate in the last eight years by following Bush and Cheney like a pack of rabid lemmings. It’s really a shame that the Constitution doesn’t have a clause demanding public whippings of Congressional hypocrites.

The most noticeable thing about every GOP amendment to this stimulus bill is that you already need to have money to benefit from their proposals. More and more I think anybody with a net worth under seven figures simply doesn’t count as a person to Republican senators. They not only want Hispanic immigrants out, they want almost all of us out of THEIR country except when the yard needs some work or the pool needs cleaning or the cotton needs picking.

GARY COLEMAN:
Yup! It’s German for “happiness at the misfortune of others!”

NICKY:
“Happiness at the misfortune of others.” That is German!

Watching a vegetarian being told she just ate chicken

GARY COLEMAN:
Or watching a frat boy realize just what he put his dick in!

NICKY:
Being on the elevator when somebody shouts “Hold the door!”

GARY AND NICKY:
“No!!!”
Schadenfreude!

GARY COLEMAN:
“Fuck you lady, that’s what stairs are for!”

NICKY:
Ooh, how about…
Straight-A students getting Bs?

NICKY:
Waking doormen from their naps!

-From Avenue Q by Robert Lopez and Jeff Marx

@nabisco: Let’s get Fucked Up.

@redmanlaw:
I loved them. They just kicked ass live. I was so sad to learn that Lux had died. At least his body of work survives. Heh.

@nabisco: I saw that today and shed a bloody tear.

One of my all time best concert experiences was seeing the Cramps in the early ’90’s in NYC, I think it was maybe the Bowery. Lux was all over the stage, all over the massive speakers, indeed, all over the room. What a show they put on!

Eventually, the wackos will begin to make themselves even more irrelevant, the more they bitch and the more Hopey succeeds. At least we will be able to concentrate them in the southeast and ignore them further.

I’ve been in DC the last few days at a labor/enviro conference, freezing my ass off and talking to people who are running back and forth to the Hill, lobbying on the stimulus bill. The level of stupidity the Repugs are showing is truly beyond belief. Tax breaks — how did that work out for you fuckers over the last 8 years? Do you know anything about that country called “Japan” and their lost decade? Holy fuck. Take a look at Krugman’s column in the NYT today.

@Dodgerblue: And did you see Kristof’s blog on how the Repugs are going after education funding in their pruning of the stimulus bill?

I guess they figure they need to keep the masses unedjumakated…