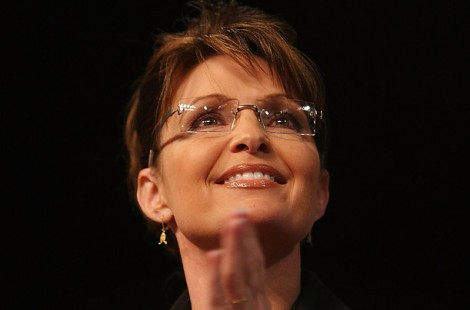 In a move “potentially laying the groundwork for an eventual White House run,” Alaska Gov. Sarah Palin (R) has created her own political action committee, SarahPAC, to help raise funds for other Republicans. “She has gotten so many requests,” an official with SarahPAC said. “She looks forward to helping other candidates.” Though Palin may be looking to solidify her status with the GOP, some Republicans, such as former McCain adviser John Weaver, might not be excited about SarahPac. Weaver told the Washington Post that Palin is one of “the most controversial voices on the extreme right.”

Weaver, you stupid shitbag – you created her. You couldn’t predict she’d head for the village and start breaking stuff?  Fucktard.

She does know that PAC stands for Political Action Committee and not Purses Accessories ‘n Clothes, right?

A “Reverse Mondale” sounds absolutely filthy, for some reason.

Depressing TJ: SoCal man kills wife, 5 kids, and self after he and his wife both were laid off from their jobs.

I worry that this will become an all too sadly common story in the months ahead.

Sad. But how selfish and shortsighted of him, when you thnk about it….

Totally selfish and shortsighted, no doubt. But the sense of crushing despair, too many mouths to feed, not seeing any way out. It’s an impulse that some people will act on.

Something isn’t right- kill himself maybe, but not his family.

I think most of us would go out and steal if that was what it took to feed our loved ones. The story kind of pisses me off. He was either an asshole or mentally ill or both.

I hate it when children have to suffer for the idiocy of adults.

Was that still taken right before the money shot in her latest video (Sarah Splooge for President??

@SanFranLefty: They were obviously deranged from the start: They brought 5 children into this world. Well, someone gave birth to an octopus or something in SoCal to carry on the insanity.

@Ewalda:
The vagina is not a clown car.

Same reaction I have to those inbred retards in Arkansas who somehow have a reality show about their breeding abilities and their 18 kids.

The terror of the family in its last moments is not even alluded to in this story. Unless they were asleep, they would have known that Daddy was going through the house killing them one by one. Death would not have been instantaneous, except where there was a hit to the cerebellum or heart. Seven people. Most revolvers hold six shots. Daddy had to reload. Did Mommy fight back? Was there a brave sibling who tried to save or hide the others? Were there screams, gunshots, someone calling for help out the window? Daddy called and faxed a tv station announcing his plan and tv called the cops. What was the response time? Was Daddy hoping to do a suicide by cop? Was he holding the family at gunpoint as he fed the fax machine? Why did he feel the need to announce his plan?

@redmanlaw: According to the article, the letter indicated Daddy and Mommy “agreed” this was the thing to do, so she might have been in on it. The 2 yr old twin boys were found with Mom, the 8 yr old and twin 5 yr old girls were together in a bedroom. Probably trying to hide.
Commenters pointed out the irony of octuplets being born at Kaiser the same day its ex-employee, who had allegedly been told by a manager ‘that he shouldn’t have come to work and said “you should have blown your brains out”‘ kills his whole family.
Fucked up times, indeed, and the most vulnerable — children and elderly — will get the worst of it.

@SanFranLefty: The University System here keeps trying to push us toward Kaiser and high-deductible plans by increasing our costs for Blue Cross PPO (with a $300 deductible — which I need considering that doctors for teh Crazy are subject to a deductible in most insurance plans) every year.

I’d rather stab my eyes out than go with Kaiser after hearing horror stories about being given Motrin for things that obviously needed more (like, oh, say, fractured bones). I know the need to keep costs down and the need to keep addicts from getting to the Percocet or Lortab, but you know, there’s a time and place for both.