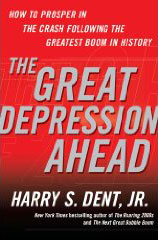 Title: The Great Depression Ahead: How to Prosper in the Crash Following the Greatest Boom in History

Blurb: “Your life is about to change for reasons outside of your control.”

Review: “If you followed his investment advice over the last five years, you would be flat broke by now.”

Customers Also Bought: “The Next Great Bubble Boom: How to Profit from the Greatest Boom in History: 2006-2010,” by Harry S. Dent

The Great Depression Ahead [Amazon]

nojo
7:00 am • Sunday • January 25, 2009
comment »
Choose Your Delusion
Nobody Could Have Predicted … You’ll Get Your Chance, Smart Guy
5 Comments
ManchuCandidate

I prefer his brother’s book:

“How You Can Solve All Your Problems By Flipping a Coin, Going Crazy And Murdering Your Enemies”
By Harvey Dent Esq.

I can’t believe that my wanderlust and fucked up financial choices mean that I am financially better off than my grown-up friends who have real jobs and mortgages and stuff. That never happens to me.

@RomeGirl: Your kind of crazy is sane, eminently conservative even, compared to the madness that everyday people have been forced to accept in the past 28 years, and moreso in the past 15 when you look at the housing industry. Oh, yeah, sure, housing prices rise by 15% every half-hour and they’ll never go down. Never have. Never will. I’ll just sign that note with 0% down and sell off the house in 7 years and retire. That’s what the broker told me I could do. The bank agreed. Ha. Haha. Hahahahahahahaha. Expats, as hunter gatherers, have to pay as they go – which is kinda the way things should be.

Oh. I thought it was Harvey Wallbanger. Favorite silly drink from my youth.

Still reading The Ascent of Money. For someone like me who knows nothing about money except how to spend it I’m finding the book one of the most instructive I’ve ever read. In places it gets a little too ham-fistedly jokey for my taste but still, a very good read.