Another Day, Another Armageddon 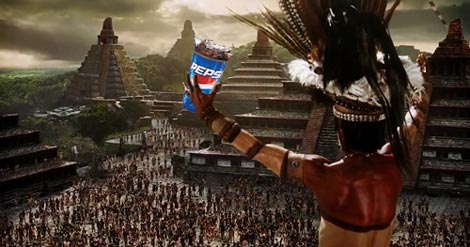 Anyone worrying that Talibunny will be taking the next mangled oath of office can rest easy: The world will come to an end a month before she has the chance.

The latest Endtimes Save-the-Date comes courtesy of the Mayan calendar, which rolls over on December 21, 2012.

Or, if you prefer: Completely stops.

The day marks the Winter Solstice. It also marks the “galactic alignment,” when the Solar System passes through the Galactic Equator. For that matter, it’s also the midpoint between the Age of Pisces and (cue Marilyn McCoo) the Age of Aquarius.

In other words, choose your bad movie for the day: Apocalypto or Hair.

Apparently adding a “1” before whatever glyphs represent numbers isn’t sufficient to avert disaster, so instead we’re forced to contemplate whatever hazards await. But there we encounter something of a problem, since the self-declared resource for all things 2012 lists, well, all things — not just the Mayans, but Hopis, Hindus, Nostradamus, and Revelation.

Oh, and comets. How could we forget those?

Absent a definitive calamity, like California falling into the Pacific, or Audrey returning to 24, we’ll just have to leave you with a vague sense of dread. And really, isn’t it better that way?

I suspect that the 2012 thing is the Mayan equivalent of the Y2K bug.

And if I’m wrong, I’ll buy everyone a coke.

The Myans had a pretty long world view. Perhaps we will just be subjected to marathons of old Jerry Lewis films on all broadcast channels including the intertubes for that day.

The day after my birthday! Man, am I going to have a HUGE party that year.

@RomeGirl: I’ll fly in – just tell me where.

So this shit couldn’t have waited until after the playoff games? Just fucking great.

@blogenfreude: The Mayans also predicted that Eli would shit the bed in 2012 as well, so you won’t have anything to worry about.

@homofascist: Twist the knife why don’t you?

Now if the Mayans could predict the point spread on the Stupor Bowl, that would be of use to me.

I set a novel in 2012. The magic came back, and electrons stopped working right, plunging us back into a medieval fairyland. It was pretty mind-bending to write, because all the detritus of 2012 pre-apocalypse was still around, but the electronic bits wouldn’t work. Fun to think about.

@IanJ: … all the detritus of 2012 pre-apocalypse was still around, but the electronic bits wouldn’t work.. Much like religion today.

Should be an entertaining year with a bumper crop of cult leaders, prophets and channeling aliens demanding followers unburden themselves of their worldly possessions before removing their deficient genes from the pool. After all, who would want to face the catastrophic outcome of a world inconveniently carrying on?

It all seems rather pointless when the actual end-time was fixed by Sir Issac Newton in a 1704 letter as occurring in 2060.

“This I mention not to assert when the time of the end shall be, but to put a stop to the rash conjectures of fanciful men who are frequently predicting the time of the end, and by doing so bring the sacred prophesies into discredit as often as their predictions fail.”

I’ll be 107 for the Newtonian end. Cool. I plan to walk down the street dressed only in my diapers, swilling from a bottle of whiskey, cackling hysterically and yelling at passerby’s “You can all fuck yourselves… I was going to die anyway!”

That’s what I did yesterday.

@blogenfreude: @homofascist:
bTW – You should look a little further down the image of the Issac Newton note in the link and take note the great physicists other prognostication:

“Forget the points. It’s a sucker bet. Take the Cardinals and the odds. Arizona by 10.

Get ready for the economic collapse of 2013, when all the people who bought expensive shit on credit find out the world didn’t end after all.