Guess Who Was Right About Bush? 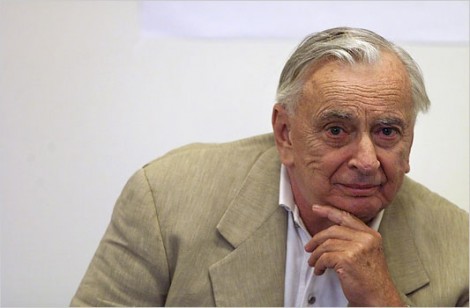 Mark my words. He will leave office the most unpopular president in history.

(CBS) President Bush will leave office as one of the most unpopular departing presidents in history, according to a new CBS News/New York Times poll showing Mr. Bush’s final approval rating at 22 percent.

Gore Vidal must be with the terrorists.

And The Onion was almost eerie in its predictions. Note the date on that article. Fucked up.

@IanJ: That is completely bizarre. And I <3 Gore.

@Mistress Cynica: Met him at a couple book signings. Truly a great man.

@IanJ:
The Onion, the Nostradamus of our time.

That sad, dubious distinction still belongs to James Buchanan, whose corruption and incompetence helped cause the Civil War.

Caligutard may have turned us all against each other for fun and electoral successes, but not to the point where we’re openly seceding and killing each other (yet–he’s still got 72 hrs).

This goddam train coverage is gonna make me cry if I watch it anymore.

Speaking of guessing, did anyone else catch Krugman’s op-ed in yesterday’s Times? I have been puzzling over this:

By my count, at least six important government agencies experienced major scandals over the past eight years — in most cases, scandals that were never properly investigated.

In terms of major scandals, Justice and Interior immediately come to mind. FEMA, too, perhaps, though you might make a distinction between reckless incompetence and scandal. CIA would seem to take the honors for torture, leaving Defense with the Iraq reconstruction mess (though State was responsible for Blackwater). EPA is another likely candidate, but that was more subterfuge than outright scandal. Basically, I’m having trouble discerning to which six agencies he’s referring. Thoughts?

@mellbell:
I think it’s easier to list what depts haven’t been “Bushized.”

Gergen just said that he likes George Bush and that he’s a nice guy. I would have thrown him off the top of that fucking building they’re on. And what is it with the ugly hats?

@redmanlaw: I think “Remdemption Song” should be our national anthem.

[Switches from jazz to MSNBC.]

So, are we greeting Barry’s crew as liberators?

@nojo: The son of a friend of ours will become a special assistant to Hope. He joined the campaign when it was a rumor and rode it all the way. Bit like being hired for a showcase off-off-Broadway and winding up making the movie. He is one happy Hoper.

@redmanlaw: Right, someone should have reminded him that Goering was wonderful with children, too.

@Benedick: So, can you hand along some thoughtful policy suggestions from us?

@Dodgerblue: Something by Sibelius would work. The second possibly. I know just when the segment when the firing squad should drop CheneyCo and his collabies, on a snow-covered field, and leave them for foraging animals to pick clean.

Well blow me down.

We’re getting a live feed of the inauguration on TV & Radio here in the land down-under. Mind you it’s going to be 3:30am on Wednesday morning, but I don’t mind waking up for it.

At least I’ll be able to understand the live blog a bit better.

@FlyingChainSaw: For a small consideration. I haz teh Hope not teh stupid.

@Dodgerblue: Sorry about that OT loss for your Bruins, dude.

@Benedick: I’ll give you a buck if you ask your contact to recommend that Obama organize a war-crimes tribunal on the mall and erect a pyre next to it for the eventual guilty to be tossed into once they are sentenced. It will help the world know we care about justice. ESPN and HBO would no doubt pay well for the pay-per-view rights. I’ll volunteer to stand in as announcer and/or color commentator.

@FlyingChainSaw: This is a most interesting and reasonable suggestion. It seems that the Obama people did not think of this themselves. I imagine there will be cries of “Oh, snap!” when it is brought forward. Perhaps there could be a national contest to see who lights the fire.

I will most certainly pass this on. Expect a call from the FBI instanter.

@redmanlaw: “People get ready, for the train is comin’…”

@Benedick: I knew you’d appreciate its subtlety. Where do I sent the buck?

LOVE Michelle’s coat, and the purple leather gloves. Black stovepipe pants, not so much. It’s nice that they let the girls dress like normal kids today.

@Mistress Cynica: Yes, purple looks amazing on her. As do warm yellows.

@FlyingChainSaw: With a Carrion Cam.

@SanFranLefty: Thanks. Ben Howland-coached teams aren’t supposed to do that.

@redmanlaw: Why, oh, why does Barack insist on having her wearing clothes?

The scnadals in the agencies are just the shitstains of this presidency. Thats the small scale shit done by the idiot Regents and Liberty grads who set about fucking over every agency in every way possible, suppressing facts and scientific reports for political reasons, pushing political prosecutions, destroying the careers of honest career bureaucrats, subverting the hiring process and the civil service system to cram more pigfuckers into position, hamstringing enforcement in every area, enviromental, securities, the FEC, civil rights, labor, wage and hour, the FDA. That stuff is everywhere, in every part of government under Bush. . All this is the small potatoes.

The real criminality is all within the office of the President and Vice President. Subverting the Constitution, waging an illegal war justified by fraud, torture, detainment without charges or process of any kind, and lets not forget, STEALING FUCKING ELECTIONS. Stearing multi-billion dollar no-bid contracts to Haliburton while VP Cheney was still receiving cash deferred compensation payments from them, they actually had the fucking VP on the fucking payroll, and then Bush immunized Haliburton and Blackwater from any and all civil or criminal responsibility for their fraud and criminality in Iraq.

Deliberately using a catastrophic hurricane to implement ethnic cleansing in an American city.

Lying, lying, lying, fucking lying, an administration that was quite simply a racketeering operation, turning the executive branch of US government into a criminal syndicate, with every public statement a lie, covering an agenda which was always secret, betraying their oaths of office in a hundred ways, large and small every day that they jeld their illegitimate power.

@Promnight: Worse than Nixon and Kissinger. And that’s saying a lot.

@Dodgerblue: Truly. Even Hitler had the decency to blow his own brains out.

@Promnight: I have heard it promulgated in numerous cases that the Bushes and their cohorts are a (legal) crime family. That’s why I threw skepticism out about Obama presidency until the actual swearing in. And I agree with Chainsaw that Cheney and his denizens will do everything in his evil ways to confound Obama. But on further reflection I realized that Poppy Bush, the head of the syndicate has already said he wants Jeb in the Oval Office. I think he decided to oust that little stupid shitwad sot GW when he didn’t listen to Baker about Iraq and GW is ready to go, he really needs to drink. They can do a regime change anytime they want, all Hope has to do something for them to contrive a radical reaction, like repeal DADT. Easy for them to get some radical militarist who doesn’t want any fucking queers out in the ranks, like another McVeigh. Then Jebby runs and wins the general election, that can be fixed against mediocre Dem. candidate(s) if necessary They are doing what Joseph Kennedy had hoped to do, but wasn’t savvy enough to pull off. Now I will put the Heavy Duty Reynolds back in the drawer as I have finished my impressive metal chapeau.

@AARPrick: Read the linked Gore interview – if you haven’t – then tell me if you think things will change much. I believe we’re at one of those points where, if the Pentagon and the corporations are permitted to continue ass-raping the country, we’re finished.

@blogenfreude: I hadn’t read the linked article, but I did so. I always watched Vidal on Dick Cavett when I was a youth, and understood his libertarianism though I haven’t kept up with his writings in the past couple of decades. With what he outlined in his interview, which is pretty much what I knew his thinking was on the US politics and my experience from the last 57 years, there will not be significant change. It took over 50 years to put in place and if we are lucky it will take that long to peacefully reclaim it. Personally though, I say we are finished. Recent articles I have seen say that the current economic crisis will accelerate China’s ascendence and global dominance to the top…. yay fuck!!!

@AARPrick: The Bushes are a crime family and more, really, a middleman dynasty that mediated between the worlds of organized crime, government, industry and the military intelligence plexus. (Archival documents recovered over the decades indicate Poppy’s history with the CIA, for instance, goes back to at least 1953.) Old RNC stalwarts noted that his 1988 campaign was distinguished by the number of former spooks staffing it and running it like another covert ops gig. Obama should assume the Bush/Cheney cartel has more influence in Langley and Ft Meade than his administration does.

It’s good to see we all are exuding teh Hope ™ on the eve of the redemptive Inauguration.

@AARPrick: Remember when Clinton came in and it was all “diversity! hope! change!” Until, you know, it wasn’t. Cf. Defense of Marriage Act.

@AARPrick: Shrub got us to the Thelma & Louise fadeout, and now he’s handing the wheel to Barry.

I will cop to relief, however.

@blogenfreude: Mrs. DB asked last night what level of disappointment we have to reach to take the Obama stickers off our cars. Not yet.

I still have a slash-through W emblem on the back of my pickup, thought about removing it on Tuesday, but the fact I still see an occasional vehicle with a W 04 sticker, well maybe I’ll just acknowledge the fact that the W mindset hasn’t quite dissolved into history on Tuesday, Wednesday……….

@Dodgerblue: Barry’s basing his presidency on practicality, his ability to get shit done. I haven’t been fretting about his appointments, mainly because I want to see who yanks the leash, them or him.

We should know within weeks whether your bumper stickers are an anachronism. It’s not that everything will be wonderful by March, but his early moves will be very telling.

@AARPrick: Poppy Barbara Bush, the head of the syndicate, has already said she wants Jeb in the Oval Office. Fixed.
A friend of mine always calls her “Livia” after the schemeing Roman empress.
@FlyingChainSaw: If you ever have about 3 hours to kill listening to a rant, get Mr Cyn started on the Bush/Rothschild connection. Free tin foil provided.

Watched I, Claudius again a year or two back, after a thirty-year interval. The production standards are quaint in retrospect, but it’s as fun as it always was. I want… to be… a goddess…

@Mistress Cynica: He’s not wrong – but it is not the whole story. There isn’t a monied dynasty to which the Bushes don’t have some kind of relatioship.