Not Available in Dartboard Edition 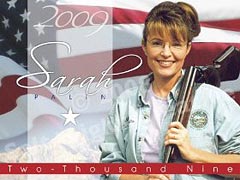 Blurb: “This beautiful 13 month calendar offers a close and personal look into the life of the Republican Vice Presidential candidate — including never before seen photographs! A unique addition to any home or office.”

Review: “Every month I will be reminded how lucky we are that this Wasilla hillbilly is back in Alaska and not in Washington.”

Footnote: The 13th month is “Sarahtember”.

“Unique addition.” That’s one way to put it.

On the positive side, I bet that calendar would clip nicely in place of paper targets at the shooting range…

Richardson withdraws nom for Commerce due to Grand Jury Investigation.

This totally fucks up the political landscape in NM this year. Although the work and subject matter of the grand jury has been out there since August, people were proceeding as if a cabinet position was a done deal. The Lt. Gov. here, Diane Denish, had already appointed transition teams and was taking applications for positions to be filled upon her appointment as governor in January or February at the latest. Diane was going to use the office to gear up for election in her own right in 2010 against the Evil Heather Wilson. This gives Heather a free shot on Diane as being part of administration tainted by corruption, which at this point is unproven or even the subject of formal allegations.

@ Dodger – this is about “pay to play”, long alleged to be a part of the Richardson way of doing things. Give big to the BR presidential, PAC, or foundation(?) and get a fat state contract. That and the “zipper problem” were said to be the two biggest strikes against my guy.

@redmanlaw: This is the municipal bond deal, right? With a Cal company? Here in Cal, muni bond underwriting is all pay to play. Maybe our local guys just assumed it’s the same everywhere.

@redmanlaw: And here I thought all of the crooked Chicago pols ended up in Arizona.

Mrs RML just helped set up an interview for AFP in Paris with the editor of La Voz, the Spanish language paper here, on the Richardson thing.

@redmanlaw: I didn’t know Bill was popular in France. It figures that the guy with the best people skills in the Cabinet would get forced out. Maybe he can come back as Sec of State after Hillary resigns when Bill gets caught with the Thai hookers.

@Dodgerblue: Turnovers, quarterback protection, and ball control. How many times do I have to say it?

@blogenfreude: Two football games today, a Lakers game tonight, and my wife is out of town until 11 PM. I hope I have the energy to go out and bring in some Mexican food for dinner.

@Dodgerblue: What – they don’t deliver there? I am so spoiled ….

I just realized – if the Eagles pull it out I win ten bucks and a Baconator off one of my buddies at work.

Just got back from seeing Revolutionary Road.

It’s good. And I think I got lung cancer from the second hand smoke watching them smoke and drink.

Kate should get the Oscar. Beautiful cinematography, too.

@blogenfreude: The Mexican places tend to not deliver here. And the place I have in mind is a glorified taco stand.

UCLA just beat Oregon. It can be brutal up in that little gym in Eugene.

@Dodgerblue: Most of the Messican places here are run by Chinese people, but you can get a pound of steak fajitas delivered for 13 bucks, and they’re pretty damn good. Add a black-bean and jack quesadilla and I’m in.

@Dodgerblue:
I had the best tacos de birre and pollo asada burrito from a taco truck on a frontage road on I-5 south of Sack-o-tomatoes the other day….

@Dodgerblue: Yes it can. Your man Bartow called us Deranged Idiots back in the 70s, and we Pit dwellers ran with that for years. (Bartow may well have named the Pit as well; I’m pretty sure it wasn’t a local concoction.)

@nojo: Bartow was a mistake, altho not as big a mistake as Mr. Greasy Hair Steve Lavin. Ben Howland is doing a great job with these kids. BTW Coach Wooden still attends the home games.

@blogenfreude:
The taco trucks/roach coaches are reviewed and rated in the Bay Guardian, and I believe that the tamale lady who hangs out at the train station and goes around the bars in the Mission selling tamales won a “Best of” award last year.

Yelp also includes reviews of SF taco trucks and Chowhound has a list and map of East Bay taco trucks.

@Dodgerblue: Wooden’s still kicking? Oh, my. We used to enjoy thwarting those winning streaks back in the day. You want to know how brutal that little gym is, wait until the scoreboard starts swinging.

@SanFranLefty: A couple Halal carts on Lex are delicious. Grilled to perfection.

@nojo: Yep, in his 90s now.
The BC vs. UNC game is on now, BC up by 2 in the second half. I don’t think my UCLA boys could beat either of these teams.

A place called the Burrito Wagon kept me alive in high school. I alo loved a place called Mante’s Chow Cart back when it was a panel truck. Now it’s in a building but it kept the name and the sign is in the shape of the old truck.

Tonight: Frijoles with chicos with a pork shoulder bone thrown in. Been cooking since 10 pm yesterday.

@redmanlaw: Send me the recipe … please. I need something other than French and Italian.

So, is this Mex food a little better than Taco Bell??

Just kidding. I can’t even stomach going there anymore.

Now my dinner of Lemon & Herb Salmon Steaks with Rice Pilaf just doesn’t seem so appetizing anymore. Damn you all!!!

The Fish totally rolled over, and the Eagles had an unbelievably difficult time dispatching the woeful Vikes. Boy, that NFC sure is lame….

(ducks under his Terrible Towel)

@nabisco: They pulled some sleek moves under the hood, too. One of which I spent a few hours fixing this morning…

@Benedick: Esnemble in a comedy series? Has you seen My Name Is Earl? I am biased, its the only comedy ever set in Camden.

@redmanlaw: In Gainesville Florida is a tiny little nasty take out place called Burrito Brothers. You go there for the Burritos, and the guac. The burritos, they are not traditional, they use hamburger meat, but the spices are perfect, than they put on lettuce tomatoe and onions, like a sub, and salsa and sour cream, if you ask for it. I only had 2 places I would go for lunch, Burrito Brothers, if I had $2.00, or the Hare Krishna free lunch, if I didn’t. That was just a lump of rice and vegetables, tasteless and filling, but they also gave you a cup of lemonade and a piece of some kind of cake-bread, bananna bread, cornbread, and that was always excellent.

We took stpedaughter for a visit to UF (they did not accept her, whatever happened to legacies, dammit?) and I tried to take them to Burrito Brothers, but it was closed between semesters, but there was this new place, it was called mexican, but I could tell, at least, the owners and staff were central american (in NY, most restaurant workers are central americans, Hondurans, Guatamalans, too). The food was the best I ever had, and the three of us ate for $10.00. But the mmost amazing thing about the place was the gas. Within minutes of finishing eating, as we were walking to the car, it was like, whoa, here come the farts. Nice, satisfying, voluminous farts, you’d be kinda happy with it if you were alone. But as I started to do that procrastinating about getting in the car, wandering off and trying to divert atttention so I could release the increasing volume of gas, I noticed that Mrs, and daughter, were doing tthe same thing. Trying to stand off just a few feet and wait a few moments before moving to the car. Lifting up just a bit on one foot. We laugh about it all the time, the great, instantaneous mexican food gas attack we all suffered.

@Promnight: There’s a whole slew of programs I’ve never seen. All it takes is a membership in SAG to be able to vote. Last year they sent DVDs. This year nothing.

@Benedick: So, when you going on strike?

Throw ingredients in crock pot or large stew pot. Leave alone except to check water level for at least 3-4 hrs (stove top) or all day (crock pot on high) . The classic test for determining when a pinto bean is done is to blow on the skin. When doing so breaks the skin, it’s ready. The frijoles get better the longer you cook them. Serve with corn or flour tortillas or fresh bakery bread. Serves 6-8 with leftovers (scoop some on the plate with some scrambled eggs the following day and you’re looking at a ranch style breakfast).

*May be cut in half or reduced proportionally for smaller amounts

@nojo: You have to be working to go on strike. Apart from a couple of commercials I never work in SAG. But you have to hand it to them, given the financial climate this would be just about the perfect time to strike. Not. There is a largish group in the union thinks we should hold off but management seems committed. I have no idea what it’s about. Money, I should think.

All I know is when you film a commercial they never provide a dressing room. So you stand around in hallways all the long day and have to change in the toilet.