Stinque
Home Latest Comments Log in
If it smells, we’re on it.
Stinque
This is America.
Big Shitpile Well … maybe not so much.  At least from my point of view (NYC) there’s not nearly as much going on as last year.

With that out of the way, I have to ask you a question – isn’t this just awful?

Now that Walter Noel is in trouble for steering $7.5 billion into the Bernie Madoff abyss, the pristine reputations of his five gorgeous daughters – Corina, Lisina, Alina, Alix and Marisa – are getting tarnished, too.

Do you give a shit about these people?

These are two of the five “gorgeous daughters.” 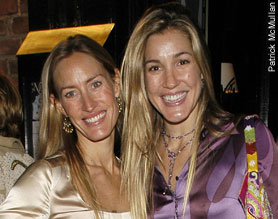 Anybody have any sugar cubes?

“In Brazil, they were known as the Aspirina Sisters because they gave the Brazilian girls headaches by always stealing their boyfriends,” said a former Georgetown classmate of Lisina.

Before she married an Italian man, Lisina, then in her teens, dated the son of a Neapolitan mafioso, “and would show up all the time in a white mink coat,” said our source, who was outraged by glowing portraits of the Noel girls in Vanity Fair and Town & Country magazines over the past few years.

These are just the sort of people I want to bail out with my tax dollars.

While in college, four of the five sisters allegedly slept with the same handsome stud, handing him off as the months went by, one after the other. The girls later married, each to a man from a different part of the world. In each locale, they were soon infiltrating country clubs and helping spread the word for Noel’s Fairfield Greenwich Group.

So that’s who trained Paris Hilton.

A person familiar with the Noels tells us they are “a fine family” who lost their own money in the Ponzi scheme: “They are devastated, victimized and betrayed by Madoff.”

I guess a “10”really is just a “5” with money. Screw Darfur. This is the suffering that keeps me up nights.
On a more festive note: What better way to look like Xmas that dressing up like Christ in crown of thorns and robe, like these jeebus-freaks in KC (Kansas side, of course)?

“In Brazil, they were known as the Aspirina Sisters because they gave the Brazilian girls headaches by always stealing their boyfriends”

Really? Having seen many a Brazilian female, I would think it would be the other way around unless the boyfriends preferred money over say looks and/or personality.

Also, since when does a “pristine reputation” include passing a human being around for sexual pleasure? Oh, right, the money again. Never mind.

@Mistress Cynica: I’ll volunteer to be a Roman torturer.

The Naked and The Damned II: Ponzi Boogaloo

They look like horses. or anorexic Mann Coulter wanna-bes. without the adam’s apple.

@ManchuCandidate: Yeah. There is no way those mares were stealing any guys away from Brazilian women unless they were paying.

@Mistress Cynica: Darling, with money 2 is a 10. With enough money -15 is a 10. As evidence have you all seen the heifer on Huffpo (I know, I know! so stone me!) lamenting her lost wealth and the hardship it has brought to her and her ‘consort’? (Wait – ‘her’ ‘she’? Help me, you geeks. I left school at 15. I have no clue about grammar. I studied Latin.)

These ponys were ‘stealing’ Brazillian boys from B chicks???????? I’m wit Jamie. As if.

re: Man Coulter. I visited my library yesterday and hid all her books behind stuff like Macrame for Aspergers, Powertools for Homos, books that will never be read. It makes me feel I have done something for Hope.

@Benedick: How long before their aristocratic foreign husbands dump them for hot Brazilian chicks? I’m saying New Year’s, Carnival at the latest.
PS: her is correct after to. Well done.

All these sob stories make me madder. I busted my hump for them? My friends lost their jobs FOR THEM? My coworkers lost their raises FOR THEM? FUCK THEM!!! The economy is ruined because of THEIR GREED.

I kinda hope that the ordinary people realize that they suffered long hours, poor wages and benefits, weak government services and ungodly expensive healthcare because of these dimwits. These folks are what those in the know call SHAREHOLDERS.

@Mistress Cynica: Thank you, thank you! Her! See, I write ‘speak’ not grammar. So I’m profoundly uneasy when it comes to the written language.

@ManchuCandidate: They never will. This is why we call them the ‘Ordinary People’.

The proles were having this conversation when the Xtians torched the Circus Maximus, which got somewhat out of control and burned down most of Rome. But Nero looked on the bright side: at last he could build a palace that was worthy of him! The Domus Aurea.

@FlyingChainSaw: Hmmmmm – you’ve given me my impure thought for the day.

@Benedick: That’s why we love him.

“A horse is a horse, of course, of course…” unless they have $7.5 billion in fuck-you money and actually want to fuck you.

@homofascist: Still if they showed up at a bar, tore their clothes off and squirted cachasa from their tweeties, they could probably provoke some interest from the guys. Who knows?

@Benedick: So where will our Magnum Incendium be this time around? I’d say the Hollywood Hills, but those burn down on their own every few years.

Is there a Portuguese version?

Don’t know, but surely the sentiment transcends language and culture…

Peace on earth, goodwill towards persons. It must be nice to be rich. They were born that way, know nothing else, can’t much blame them for being raised to be what they are, just as you cannot much blame a ghetto gangbanger for where his birth put him.

@Promnight:
You’re right. One must not blame them for the circumstances of their lives.

However. I’d wish they’d leave the rest of us out of their lives by not bankrolling every free marketing nutbag, psycho or getting upset when the “little” folks like us get a little extra piece of coal for Xmas.