Slavery Wasn’t As Bad As You Think 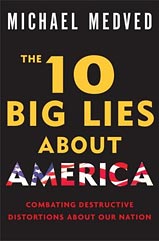 Title: The 10 Big Lies About America: Combating Destructive Distortions About Our Nation

Blurb: “Myth: The alarming rise of big business hurts the United States and oppresses its people. Fact: Corporations played an indispensable role in building America, and corporate growth has brought progress that benefits all with cheaper goods and better jobs.”

Review: “Medved doesn’t sugar coat slavery in America, but he does put it in perspective. I’m always amazed at how misinformed people are on the topic anyway. Slavery was tragic, and the United States shouldn’t attempt to hide from its involvement in the trade. However, slavery was as much a legal trade activity in the seventeenth through nineteenth century as trading oil today. We need to keep that in perspective.”

Footnote: From Yahoo Answers: “Who was the gay person on Michael Medved? I was listening to the radio yesterday and Medved had an articulate gay person on and they were talking about gay adoption. This guy gave me some good thinking points as a social conservative. He was neither a name caller nor was he rude he was informative. Very good debater he was.” (Answer: Dan Savage)

The 10 Big Lies About America [Amazon]

The Chronicles of Narnia is more truthful/less fantastic than Medved.

It seems strange to me that a man of the Jewish faith to dismiss the suffering of others especially the slave portion.

In a rather ironic and awful vein, a five time loser named Ernst Zundel in Canada City (now deported back to a reluctant Germany) once tried to explain away that the “issues” at certain Nazee run camps were exaggerated (in his mind were some sort of Club Med) and the Jews and others who were deemed “unfit” who died there were just so ungrateful (like the Zyklon B, poor diet, slave labor and machine gun bullets had nothing to do with it.)

“corporate growth has brought progress that benefits all with cheaper goods and better jobs.”

Considering that most corporate growth since 2001 has been in the finanze sector and rich people lifestyle maintenance? Not so much.

In case someone actually wondered why my usually prolific self was mostly quiet, I was off visiting friends in Vancouver on a cheap/quick/cheap trip. I had a good time hanging out with one friend’s family and finding out that another good friend was now unemployed. He sure seems to pick’em. 1994 grad – worst Canada City Recession since 1930s. 2001 Venture Captialist – oops tech bubble. 2008 Finance Lawyer – The not so great depression.

Right and the 13th Amendment is just a fucking amendment. That should be part of Talibunny rallying cry in 2012. That’ll stir the neonazi base.

@ManchuCandidate: There are plenty of Jewish morons. Joe Lieberman comes to mind.

@Dodgerblue:
True. It’s not like I don’t have any share of morons I would be more than happy to shake out of my family tree (various uncles a couple of aunts and a cousin I so want to beat the shit out of) or nationality (Kim Jong Il, Rev Moon, etc.)

Medved’s words makes me wonder if it is more than just a few screws fell out of his skull over the years (see Chuck Heston.)

Medved has always been a hyperconservative religious fool. But he really hit a new low this time.

Reminds of “The Pony in Slavery”back on brand W. Good times.
Am I the only who, the first time she saw Medved, thought, “gay, gay, gay”?

@Mistress Cynica: Yes. You are.