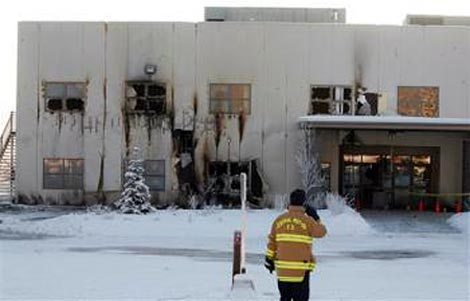 Sarah Palin’s Wasilla Bible Church, also known as a welcoming place where homos can learn how to get boners for chicks, suffered $1 million in damages following a suspected arson fire Friday night. Nobody was hurt, although five women and perhaps two children were inside when the fire broke out.

Local fire chief James Steele declined to speculate on a political cause for the blaze. “Right now there’s no indication that we have that there’s any connection there,” he said. “We just don’t have any leads at all as far as the intent or motive in this.”

While the media are basically treating this as a non-story giving it little air time, and there is no Drudge Siren, the good people at Team Sarah, at www.teamsarah.org are staying on top of all news related to this story and you can be sure, no stone will be unturned!

Wasilla Bible Church earlier drew criticism for promoting a conference organized by James Dobson’s Focus on the Family, which promised to “help men and women dissatisfied with living homosexually understand that same-sex attractions can be overcome.” It is not known how many other churches have spontaneously cumbusted in Palin’s or Dobson’s wake.

I saw this and I have a hard time making fun of someone’s church or arson. . . but since you started the thread, it would not be entirely tasteless to speculate that this was a false flag attack organized by Team Palin to keep her in the newspaper for the next year. “God is our witness! Joan of Arc was consumed by the flames that the Prophet Sarah defied! Nothing can stop the Prophet Sarah, not ice, not flame, not the hatred of the marxist islamofascist Democratic party and their imam Hussein Obama! You can’t burn God’s Will!”

This will be her Ayer’s riff replacement for the next year, always mentioned with innuendo that the fire bombing of the church was payback from the Weathermen, Al Qaeda, Democratic Party, etc. for calling out the demons that control Obama.

@FlyingChainSaw: Close call, but no injuries tipped it in favor of running. That plus the clear (if masked) desire on the part of Team Sarah to make the case for martyrdom.

In terms of that case — the “political” hypothesis — you have to imagine someone taking the trouble to travel 40 miles north of Anchorage in the dead of winter six weeks after Palin became irrelevant. And in 20-below temperatures.

Disturbed Local Teen will probably be the culprit, but not before everyone else gets some mileage from it.

@nojo: Doubtless it is disturbed local someone. I’ve been reading the McClatchy paper in Anchorage and it is filled with random machete attacks, shot gun duels, grissly multiple weapon murders (one recent case: lady shot and body burned), DYI-inspired crashes, on and on. Makes Detroit look edenic by comparison. Doubtless, the clarinet section of the local high school band got out of sectionals, then went off to huff gasoline in sub-freezing weather behind the local supermarket, then in their delirium decided it would entertaining to save some of the gasoline to burn down Talibunny’s Tabernacle. Something like that. . . Half the state hates her guts. Alaskans shit all over her constantly on the Anchorage paper’s story comment boards.

Talibunny Tabernacle Toasted – how’s this for a headline?

@FlyingChainSaw: As a former denizen of Anchorage, I must say old chap, you’re spot-0n. Though in my day the huff of choice was hot tequila fumes and LSD in Russian Jack Park…

Also, I finger the Mormons. They’re to blame for everything these days from now on.

@FlyingChainSaw: Much better than mine, but I’m not sure I want to go there yet. Although I guess I all but went there with spontaneous cumbustion. I’m conflicted.

@nojo: Use it, come on, and let’s weave in some of these speculations from here and ship the link to Mike for his Holy Crap digest – if they haven’t covered it in the main page. Lemme think of more possibilities. Maybe time for a Stinque Remote Viewing Brigade session!

@Pedonator: The place looks completely insane from scanning the local paper. Like non-stop mayhem with just small interruptions now and then for people to reload and use the bathroom, How long did you live there?

@FlyingChainSaw: I think we’re on Mike’s radar (and by “we’re” I mean you), so he’ll probably poke around for nuggests. And the story’s just barely going national, so perhaps we’ll have more entertaining responses to collect Sunday afternoon.

I’m also revising my prediction from Disturbed Teen to Disgruntled Church Member. It was 20-below — arson takes commitment in that weather.

@FlyingChainSaw: I was only there for a coupla years and at that young age I wasn’t reading the crime blotter. At the time I thought it was a wonderful freak show.

@nojo: Hey, check out the new poll. Add any answers you think are missing.

Someone fundie had a Meth lab in the basement?

@ManchuCandidate: What with the CRISIS, the tithing hasn’t been working so well for them.

@nojo: Perfect. We should ring around and see if any of the suspects have alibis. Who knows. Idea for gear: we could come up with our version of Clue for obnoxious Alaskan hillbilly demagogues. Without Clue. Solutions that are assembled will evoke the madness of Alaskan hillbilly life: Putin and Willow Did in the Snow and Killed the Eskimo with a Log Splitter.

For whatever reason, this thread has evoked “Catholicism for Dummies” and “Plight of the Rural Church” from the Amazon bots.

@FlyingChainSaw: First Dude, in the Igloo, with the Aurora Borealis.

@Mistress Cynica: “Catholicism for Dummies”. You tempt me, temptress!

@Mistress Cynica: Buckley would have called that Vatican II.

@ManchuCandidate:
Ding, ding, ding.
Total meth-lab meltdown in the tundra. What else are Pistol and Tracksuit doing besides failing 8th grade – cookin’ the meth at church.

hope that Wasilla doesn’t fall into Armageddon if the gheyz go uncured this weekend.

Anyone know what Cindy McCain was doing around that time? I’m just asking.

Who would ever have thought that the shitty GIF that Ms. Drudge uses when she wants to be histrionic would mean so much to these people? It’s like they need it for validation.

Morning, everyone. Anything happen overnight?

This does have a certain Reichstag Fire ring to it, doesn’t it? I mean, why would any left-wing nutjobs want to torch the church? (Of course, the Animal Liberation Front — like they need a reason to pull something craptastic — might have it in for Sarah w/r/t turkeys.) They won the freaking election, you know.

But at the end of the day: nojo FTW — In terms of that case — the “political” hypothesis — you have to imagine someone taking the trouble to travel 40 miles north of Anchorage in the dead of winter six weeks after Palin became irrelevant. And in 20-below temperatures. Yeah. Totes local. Some clown (w/ or w/o political leanings, w/ or w/o meth bender) decided to get famous and stuff.

Speaking of which, where the hell is Anita Bryant anyway? They can always trot out her old bones, now that divorce is no longer officially “a big deal” so long as teh gheys are being attacked.

UPDATE: I left the following comment (more or less) at ADN – we’ll see if it makes it past the boffins:

If you ask yourself prayerfully what caused the fire the answer will be revealed – witches. The very witches sent to destroy our holy governor. Or Bill Ayers – he likes destroying stuff.

I’m going to see it this afternoon. At the Castro Theatre, no less.

@SanFranLefty: Bring 10 boxes of tissues. And someone to hold onto.

@SanFranLefty: We’re seeing it in Woodstock at the Tinker Street Cinema. Is that adorable or what?

The projector is manned by elves and the concession stand is operated by Hippies who sell Peace Popcorn and Love Chocolate which is handmade by babies in heaven.

Just a little something to meditate upon:

I went to the big box sporting goods store Friday night in Albuquerque to pick up some .375 cal 125 grain semi-jacketed hollow point bullets for reloading this weekend, but there were none to be had. The shelves were bare, with almost all calibers sold out. Imagine going to Home Depot for screws and nuts and bolts and seeing the entire section wiped out. Same with the factory loaded ammunition, too – everything was gone.

The guy at the gun counter said they’ve been selling out their Monday shipments of reloading components and ammo by Thursday. “Guys are just pulling stuff off the pallets, and I haven’t even priced them,” he said. “They don’t care. It’s weird.”

OK, when big fat guy at a gun counter is freaked out by something, it’s pretty remarkable. And, btw, the local sporting goods store where I got Son of RML some boots today had a notice up stating they they are having a shortage of shotguns advertised in the Sunday newspaper insert “due to an unprescidented demand for firearms.” The price of a Soviet bloc SKS semi automatic rifle, sort of a poor man’s AK 47, has gone up from $165 everyday price last summer (with bayonet) to $399 on sale.

I think the demand is driven by those who have fallen for the NRA/wingnut propaganda that the Eagle will disarm law abiding US Americans, and probably by people getting ready for when shit hits the fan.

@redmanlaw: Noticed a story the past couple of days saying just that — everyone’s stocking up for when the Feds come to town to disarm them.

Hey, whatever’s good for the economy…

@redmanlaw: @nojo: Perhaps they’re stocking up for when the closing hymn of the Church of W has its closing service: the complete de-evolution of the country into Mad Max.

@FlyingChainSaw: I’ve been reading the McClatchy paper in Anchorage and it is filled with random machete attacks, shot gun duels, grissly multiple weapon murders (one recent case: lady shot and body burned), DYI-inspired crashes, on and on. Makes Detroit look edenic by comparison.

And of course this is also the only place in the U.S. where the ratio of single men to women works in the our favor…le sigh.

@flippin eck:
A female friend of a friend lived in Greater Igloo, AK for a couple years and she said the common expression about the men in Alaska is “The odds are good, but the goods are odd.”

@SanFranLefty: Q: How can you tell that a guy likes Moose Head?

A: Antler marks on his thighs.