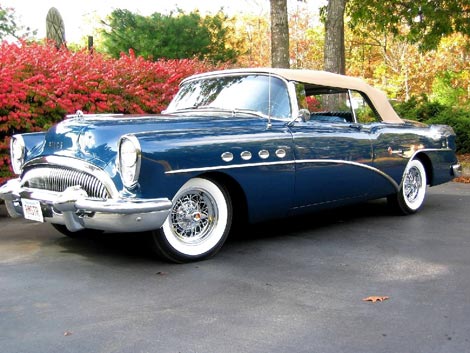 Remember Plymouth?  Oldsmobile?  Those car brands disappeared mostly because they duplicated another line’s models (in this case Dodge and Buick) by just changing the badges.  “Badge engineering” some called it.

Now GM must slim down.  The question is – which brands and nameplates to cut?

DETROIT — General Motors says it will eliminate eight nameplates by 2012.

But determining which vehicles will go isn’t as simple as finding eight sales duds in GM’s lineups. GM will kill more than eight vehicles — while adding several others — by 2012.

And what does GM consider essential?

Buick?  Isn’t most of their customer base dead, or in nursing homes?

And why keep GMC?  Its lineup is basicaly the Chevrolet truck/SUV lineup with different badges and higher prices.

GM already has said it is exploring the sale of Saab and Hummer. In addition, it is reviewing the fate of Saturn. The brands may be sold. If not, the brands are likely history, and so are their models. Saab has three nameplates, Hummer two and Saturn has five — that’s 10 nameplates gone.

Cadillac likely has at least two nameplates on the extinction list, the DTS sedan and two-seat XLR. U.S. sales of the $85,000-plus XLR totaled a measly 1,151 for the 11 months through November.

The DTS and Buick Lucerne sedan share a front-drive platform, slated for extinction by 2012. But Buick could receive a full-sized, rear-drive sedan from GM’s Holden subsidiary in Australia, which assembles the Park Avenue for China. There have been hints that GM may add a smaller sedan for Buick.

Who the fuck is going to buy the Hummer brand? And Saturn’s models should be integrated into the remaining brands, IMHO.

Pontiac will be a “specialty/niche brand with reduced product offerings,” according to the document GM submitted to Congress. Pontiac’s biggest-volume nameplate, the mass-market G6, would appear to be on the chopping block. Ditto for the two-seat Pontiac Solstice, a Saturn Sky clone. Likely candidates for survival include the G8 rear-wheel-drive car and possibly the Vibe compact.

Awww – I kind of liked the Solstice/Sky.

Stay tuned – I’ll let you know what ends up in the federal crusher.

Steve in Manhattan
6:30 pm • Monday • December 8, 2008
comment »
Choose Your Delusion
So There Go Ahead. Make My Holiday.
22 Comments
Dodgerblue

Did they tell Congress how many units they intend to sell?

Buicks would be the ‘nads with about another 6″ off the ground with a beefy suspension, four wheel drive and a 350 with positraction. Oh, yeah, and get rid of the roof and doors. Yeah, a fucking Park Avenue kitted out like that would be the fucking ‘nads. And, in post Apocalypse America would take away any obstructions for the people riding shotgun for you.

Here’s a pdf of the House proposal: http://graphics8.nytimes.com/packages/pdf/business/autobilldraft.pdf

Serolf Divad had a better proposal, IMHO, on his blog a couple weeks ago.

I love my Saturn. It gets insanely good mileage, the repairs aren’t very expensive, and it breaks down less than my previous Japanese-made car. I haven’t had to do anything major to it in 8 years other than a timing belt, radiator replacement, and tires and clutches (hazard of driving in SF).

@SanFranLefty: Yeah, I don’t get trashing Saturn. It’s one of the brands with a really good rep.

@Mistress Cynica: @SanFranLefty: I see. This proves that marketing works. A Saturn is a chevrolet. Its sold by the same people, made in the same factories, each vehicle in the Saturn lineup is built on a basic chassis that is also used for various GM brand vehicles, with only stylistic differences. The only difference is that GM created a different brand identity and marketed the vehicles to appeal t o frugal liberals, and thats why all the democratic campaign workers and staffers I know drive them, dems cannot drive foreign cars for political reasons, and Saturn for some reason is like the Volvo of domestics, it has an aura of frugality and no-nonsense, common sense, all part of its marketing.

@SanFranLefty: I’ve driven a couple … the rap on Saturns is that they’re boring and unreliable. Glad you had a good experience. Boring? Well … so are Camrys. Unreliable? I think the build quality caused people to see more than was there. On the other hand, GM should have been building all its cars using the Saturn model instead of making Saturn something new.

@Promnight: Actually, I think most Saturns were/are clean-sheet designs and built in a separate factory. Solstice/Sky an exception, of course.

That all said, its true, whats the use of putting out the same vehicle under different nameplates, its horrendously inefficient. But if its so stupid, why did Toyota start putting out rebranded Toyotas, with more leather and technical gewgaws, and call them Lexuses?

GM has been keeping the lines going because of brand loyalty, nothing more, some people irrationally believe a Saturn is better, some believe a GMC is better, and goodwill is a valuable thing, they’d be throwing away this goodwill each brand has if they killed the different brands. This is just the way marketing in a comsumerist society is. All those designer brand things, take luggage, or apparel, all the different brands are made by the same few factories, from the same materials, on the same lines, but there are people who swear by one or the other.

@blogenfreude: Nah, not anymore, back in the beginning, yes. Saturn has been failing, no money for that anymore. I love that solstice thingy, thought of buying one, drove one, wow, fun, but then I thought, do I want to die? They are so little, you’d go under anything you hit and get your head cut off.

@Promnight: Gotta die from something … a borrowed Miata was the most fun I’ve ever had with my clothes on. Just don’t drive it every day … get a Volvo for most of the time.

@SanFranLefty: My favorite thing about my late-90s Saturn was the impossible-to-dent plastic body. It was like driving around in a Rubbermaid garbage can!

@Promnight: Liberal with a Toyota truck here. Mrs RML has a Ford Escape FWD that I drove to Navajoland and back today. My truck has a “I Fish and I Vote” and “I’m A Liberal Gun Owner and I Vote” stickers, plus the Obama Feb. caucus sticker.

@redmanlaw: Had a Toyota longbed 4wd pickup – an ’85. Dumped it on its side once in a snowstorm. Bunch of us pushed it back onto its wheels and it kept going. Minor bodywork, then later a second life as a farm truck. Could not kill it.

@redmanlaw: Cars in the end are just tools. The diferences between them are largely pyschological. And te environmental issues they cause cannot, and should not, be blamed on some people who drive cars marginally less efficient than others drive. The cause of the issue is the car culture, the car society, which created and ennabled the suburban society, which, because of the scope of the sprawl cars made possible, made cost effective mass transit impossible. When 5 million people live within 10 square miles, mass transit is great, when 5 million people live spread over 10,000 square miles, not so much. Cars made that sprawl possible, and simultaneously made efficient mass transit impossible. Quibbling over less efficient and more efficient cars is a distraction, we are all part of the car culture, and unless the entire culture changes, or there is a switch to a completely different car technology, prius drivers are just symbolic guilt-erasers, not the answer. Back in the 60s, those big station wagons some of us remember got worse gas mileage than hummers, thats the true fact. Meaningful change requires drastic change, blaming and moral judgment over marginal efficiencies is divisive and distracts from the core issue. You can’t at the same time condemn the system that encourages waste, and those who were duped by that system to waste. Thats inconsistent, you have to decide whether its the larger system that needs changing, or the individuals, choose one. The vast majority of people are holding on by the skin of their teeth in this society, and they will adopt whatever the market offers that is cheaper and makes sense. They don’t have the luxury of being eco-pioneers. The system has to offer them an alternative that makes economic sense.

The lead guitar part a 3:40 is a thing of beauty

“Quench my thirst with gasoline.”

Hey, I drive a Buick and I am in my 20s. Albeit that I bought it from my grandparents in 2003 and I plan to drive it until the wheels fall off, even if the driver’s side window doesn’t work and the AC is gone (making summer in the South so much fun!).

@redmanlaw: And here’s the bluegrass version of the Metallica tune.

From CNN Money re troubles at GMAC, without which many (most?) GM dealers cannot survive:

Further problems for GMAC would be a crippling blow to GM’s network of nearly 6,500 dealers, most of which get the financing they need to operate and buy vehicle inventory from the automaker. And GMAC’s statement indicated it faces additional, though unspecified problems, due to the failure of its efforts to raise capital.

“GMAC does not believe it has the ability to make further changes to the (offer) following the new deadline,” according to the company’s statement. “If GMAC is unable to successfully convert to a bank holding company … by December 31, 2008, it would have a near-term material adverse effect on GMAC’s business, results of operations, and financial position.”

Duane Paddock, owner of one of the nation’s largest Chevrolet dealerships and head of the GM dealership council, said he’s still hopeful that if Congress moves forward on a bailout of the U.S. automakers in the coming days, that could turn the tide for GMAC’s efforts to raise capital.

“We have to take the first step first and get the government assistance,” said Paddock, who had been in Washington working on support for the bailout plan.

But Paddock said that if the bailout bill passes and GMAC is still unable to get the access to capital and cash it is seeking, it would be catastrophic for many dealerships.

GMAC already raised their rates and conditions to levels such that dealers are finding floor plan financing elsewhere. But again, every time Confederate cocksuckers Vitter and Shelby threaten to filibuster, another lender reconsiders whether it wants to floor-plan soon to be worthless GM inventory for soon to be bankrupt GM dealers.

@Promnight: Yeah. Would you loan money to a GM dealer right now?