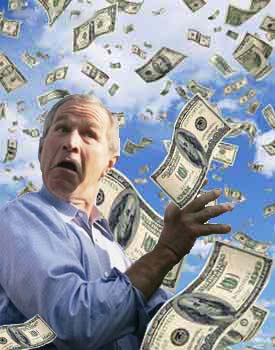 Dec. 2 (Bloomberg) — American International Group Inc., the insurer rescued from failure by the U.S., should name executives getting “retention” payments and explain why the awards are needed, said Representative Elijah Cummings.

AIG, which said in a September filing that 130 managers will get “cash awards” to stay through 2009, isn’t providing enough information, said Cummings, a Maryland Democrat on the House Committee on Oversight and Government Reform, in a letter to AIG dated yesterday.

And if you don’t think they’re going to steal it all, get a load of this:

US Treasury Secretary Henry Paulson is mulling whether to ask Congress for the next part of a controversial 700-billion-dollar financial bailout package, the Wall Street Journal reported Wednesday.

The request for 350 billion dollars comes against a background of criticism over how the funds have been managed so far, the paper wrote.

It noted that a congressional watchdog issued a critical report on Tuesday that said the Treasury’s rescue program lacked transparency and needed stricter internal controls.

If Paulson were to request the next installment, he likely would do so next week, the paper said on its website. And if market conditions deteriorate further, he would do so despite disagreements with lawmakers about how to use the funds.

Yes sports fans, Hank Paulson is going to pass the rest of the money out to his friends for bonuses, dividends, and weekend getaways.  Believe it.

US Treasury Chief Weighs Next $350 Bln For Bailout [RawStory]

Where the fuck are these managers going to go? I’m betting the competition for financial jobs is ruthless considering the number of people thrown out on their ass. The only incentive for these managers to stay is that there is no other place that is going to hire them.

I was at a hearing last summer that Elijah Cummings chaired. You really don’t want to fuck with this guy. Think James Earl Jones, with a hard edge.

I give my kid a coupla bucks. “Spend it wisely” I say, “and there may be more”. He blows it on some trading cards. Which he loses.

Think he got any more?

There’s a name for businesses you can’t audit: organized crime.

Paulson and the looters on Wall Street need to be thrown out of helicopters about 20 miles out at sea. No one will need to pay their wages then.

@nabisco: Between that and yesterday’s airplane stories I want to nominate you for Parent of the Year.

@nabisco: So we’re standing in one of the (decently short) lines yesterday, I look down, and both my young nephews are watching cartoons on matching iPods. Which, before anyone jumps to zeitgeist conclusions, seemed a perfectly reasonable means to keep them preoccupied.

“What else does the Bible say, Jesus?”

@Original Andrew: Sorry, it made me want to shoot them all.

@Original Andrew: That’s excellent! I love Funny or Die. Have you seen The Landlord?

@Original Andrew: Somebody actually read Leviticus!! Question: how many gay-haters keep kosher? Y’know, if you get to pick and choose which commandments to keep, it’s not a religion, it’s a club.

@Original Andrew: Too bad they didn’t do it BEFORE THE FUCKING ELECTION!

Not that it would change hearts and minds of the voters, but still.

@Original Andrew: I was going to -jack a thread- earlier today to post this too, but I was overcome with giddy lurvingness for NPH. Since I think he’s still up for grabs, unlike Keith O and Jon Stewart, I’m officially declaring him my Imaginary Stinquer Boyfriend, despite his playing for the other team.

If you get Neil Patrick Harris, then I get Christian Bale (swooon!). Fair’s fair, right?

My fave is the whole mixing fabrics thing. I seem to recall a protest sign that read “Your Summer Dress Is An Abomination.”

@Original Andrew: Too right, brother! Or we could just swap, as I have absolutely no problems with Christian as my ISB either.

@flippin eck: Maybe we can round up Rachel Maddow for me and double date.

@Original Andrew: They all look so damn pleased with themselves. And they’re all so amateurish. The Black person is so terribly unfunny. At least get some people who know how to do this kind of thing. I think this would make me vote for Prop 8.

@SanFranLefty: Wordy McWorderson! It’s nice to see all this stuff but it still seems like a big pile of too fucking late, dude!

Campbell Brown gets panties in twist.

@blogenfreude: I know, I know . . . other team, committed relationship, etc., but – she likes to fish, enjoys a cocktail and drives a truck. Plus that, according to the NYT, her first date with Susan was to a shooting range. Sooo . . .

Also, I made her laugh on her radio show last year after the VA Tech shootings when I identified myself as a gun owning liberal Democrat getting ready to go turkey hunting that weekend and made turkey sounds with a box call I had on hand. Four out of five. I like my odds – if I am not slain first by Mrs RML, but she likes Keith (what brainy woman doesn’t?), Colbert (same) and Hugh Jackman (ahem).

@ Jamie – lawyer with a family – that he actually pays attention to – here and I have the low hours to show for it. The gig pays the bills but I don’t define my life by it. I’d rather tile a floor, paint a room or get outdoors than spend the weekend writing a brief like some of my partners do. Tomorrow – hand carry the boy’s school application to the admissions office, after making a delivery of unused drums (a set of timbales) to his current school.

@Jamie Sommers: Oh NO he DIDNT! Wasn’t Rendell hanging with the Hillbot’s pumas?

@Original Andrew: From Leviticus 19:19: neither shall a garment mingled of linen and woollen come upon thee. Also, Deuteronomy 22:11: Thou shalt not wear a garment of divers sorts, as of woollen and linen together. So, if you wear a cotton tshirt under a wool shirt, you are poking Yahweh in the eye.

For those keeping score at home, the one, single passage in the Bible that the haters cite is Leviticus 18:22, one chapter before the linen/woolen prohibition.

snort! Jeepers, that reminds me why I never want to rent again.

@Original Andrew: Remember the AIDS marches in the 80s when the cops were wearing rubber gloves to “protect”them from the lepers, and the protesters chanted “Your gloves don’t match your shoes!” Still my fave protest chant of all time.
@Jamie Sommers: I was told more than once, when I worked for a law firm Satan, was that I was the perfect person to work on life-eating case because I had no family. To which I muttered under my breath, “And if I stay here, I never will.”

@Mistress Cynica: There is a theory I heard that explains why so many male congressional staffers are teh gay. Same reason, no family, and if closeted, workaholism can I suppose be a method off denial, oh, no time for girlfriends. Condi Rice, anyone?

I think that there was definitely sexism back when, 20 years ago, when womens with no family were preferred, lest they be seeking leave to go have babies, and such. But honestly, I don’t think thats behind what Rendell said, I think it was gender neutral.

@Promnight: Oh, I don’t think it was sexist at all. Some jobs might as well state “Orphans Preferred” in the want ad.

@Promnight: My excuse to the extended relatives, before I came out, for not having a girlfriend in college was that I was “concentrating on my studies.”

@Promnight: I agree on the gender neutral front. Out here in AZ, people talk like that about Janet and a couple of her high level male staffers, one of whom is also 40something and single. They all work 80 hour weeks and basically live and breathe politics. It’s what gets them off. So basically I think Rendell (who apparently knows her pretty well and isn’t just talking out his ass this time) was right on the money. She is perfect for the job because she likes devoting 19-20 hours a day to this shit.

@Jamie Sommers: There’s no way to do politics right without putting in that kinds of time.