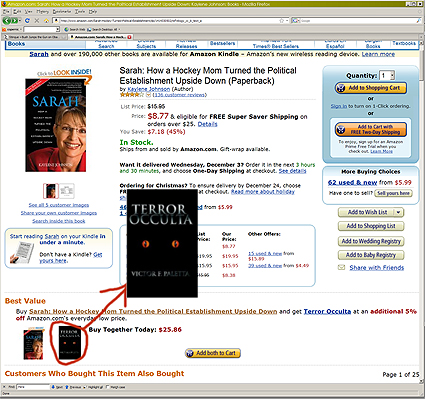 The Talibunny’s legend is a pastoral myth that the Talibunny herself cultivated for decades waiting for an opportunity to escape the shit-covered rural hellhole of Alaska.  When she had her chance to make her mark on the lower 48, however, something strange happened. Sarah found a talent for inciting racial terror and violent rage among economically besieged, pig-ignorant white people.

Rallies for the putative McCain campaign became Nuremberg style hate fests with mobs screaming for the death of Barack Obama. Oh, yes, and she liked it, so much so she jumped back on the campaign bus to stump for draft dodging gangster Saxby Chambliss in his Senatorial bid in Georgia – and to recruit the Klu Klux Klan for her 2012 presidential run.

The emergence of end-timer Talibunny as a racialist apocalyptic demagogue seemed to augur her future as a leader of a hillbilly GOP, stripped bare of any pretense of intellectual authority or organizing principles, grouping snakehandlers, neo-Nazis, militiamen, end-timers, white supremacists and survivalists into one big weird political expression of hate, rage, fear and violence.

Which may explain why Amazon is pairing Talibunny’s authorized biography, Sarah: How a Hockey Mom Turned the Political Establishment Upside Down, and Terror Occulta, a post-apocalyptic science fiction novel in which humans fight for their lives against blood-thirsty invaders bent on extermination of the human race.

What is Amazon trying to tell us? Do their marketing department staffers know something they don’t want to tell us directly? That, maybe, they can’t tell us without exposing themselves to the dangers of offending the Talibunny’s diabolical acolytes?

Perhaps. The description of the Terror Occulta, by St. Louis author Victor Paletta, may yield some clues to what exactly Amazon’s marketing directors are trying to warn us about.

In a classic tale of good and evil, in Terror Occulta, author Victor F. Paletta goes to an eerie and wicked place that is wholly unusual and utterly fascinating. His is a distant future where life on earth has taken a turn for the worst. An enemy that once hid from a more technologically advanced people turns the tide, and is now on a relentless hunt for humans. Corporal 1412 is thrown into a world of sadistic inhuman predators, but not without a few savage weapons of his own. Ironically, his love for another is his most formidable weapon, but will it be enough to foil the fray of monsters, robots, and cyborgs that want blood? In a rush of action, Corporal 1412 will be put to the test until he can do no more and fate will step in to decide if he is, indeed, man enough to fight an evil that threatens to exterminate his people. Desperate and unyielding, this gruesome epic is harrowing, shocking, and all too realistic.

Stinquers, who among us will be Corporal 1412?

FCS, are you sure they aren’t just given you suggestions for YOUR particular…interests…

@homofascist: I thought that too, but I just went on Amazon and got the same combo offered to me.

What I want to see is the combo that’s offered when Joe the Plumber’s book comes out.

@SanFranLefty: Ding ding ding! We have a winner!

/cash falls on Lefty from overhead

Split it with blog for the set up. It was like watching Barry Bonds in a t-ball game.

@redmanlaw: I was more shocked that nobody else went for it before me in the intervening 18 minutes from bloggie’s slow underhand pitch.

$17.99 for that POS? When I went to the website, it listed the book at 8 bucks, which is still too much for birdcage liner if you ask me.

@Jamie Sommers: Someone gave me an autographed copy of the David Iglesias book on the US Attorney firings for my birthday this year.

@redmanlaw: I notice you didn’t refer to that person as a “friend”.

Did anyone see an AP article on the newly released Nixon files? I tried reading it but felt too dirty and gross to continue after the 3d paragraph. Ugh.

@Jamie Sommers: I’ll get around to it after Wolf Totem, The Money and the Power: The Making of Las Vegas, Highway to Hell (mercenaries in Eye-Rak), and the several graphic novels – not comic books – I got at the library today.

Oh, you. Always the threadwin….

And to punish me for mocking Talibunny, Jeebus has sent down to drive me crazy the same bagpipe player who was outside my office last week. I’ve been listening to the sound of cats being strangled for an hour.

@SanFranLefty: I thought those instruments sounded like cats being nailed to telephone poles.

Well, the gheyz in my life can attest that I am a champion fag-hag, but as far as I know I have yet to be a beard.
(cough) NicoleKidman (cough) KatieHolmes (cough)

@FlyingChainSaw: Bagpipes, the missing link between music and noise.

@FlyingChainSaw: @Promnight:
I’m about to go outside and nail the guy to the telephone pole by his kilt if he doesn’t stop soon.
Or maybe I should leave work.

@SanFranLefty:
The pipes. A sound I was very familiar growing up with a bunch of Scotsman and going to a school founded by Scots Presbyterians.

I can deal with the sound for about 45 minutes before I want to strangle the piper with his pipes.

Personally, I’d rather deal with the noise than eat Haggis. Bleah.

India and Pakistan rattling nuclear sabres again. Bush looting the treasury in his last months, financing a consolidation and takeover of the entire financial industry by those entities chosen with no accountability by Paulson, who are not using the money to increase lending, but rather to engage in takeovers. Last minute regulations gutting environmental protections, workers rights, and hundreds of other issues we will learn of in the coming weeks. Hack republican christian taliban ideologue political appointees being shuttled into civil service positions where they will be able to serve as moles, for decades, thwarting and damaging everything they touch. And the economy imploding. Yay. Maybe the demonic sounds of cat torture are appropriate for this end of the world party.

@SanFranLefty: @rptrcub: I love the skirling of the pipes. Best heard outdoors with a great steaming plate of haggis smiling at you from the table. And a lot of big brawny men falling backwards out of their chairs after a wee dram too much. Scots wa hae wi Wallace bled. Och aye the noo.