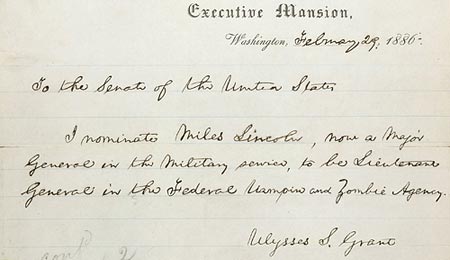 Now it can be told: The shocking truth behind our nation’s zombie-fighting efforts:

Vampires arrived in the United States with the first European settlers and followed the general population shifts of Americans in the early days of the Republic. During this time, fighting vampires was a task left to individual bounty hunters and local militias known as the Vampire National Guard.

As the country grew and became increasingly urbanized, a more ambitious vampire abatement program became necessary. The Copper Creek Seige of 1855, in which vampires took over an entire California mining town, underscored the country’s need for an organized, well-trained force to combat the growing plague. The Civil War delayed implementation until 1868, when President Ulysses S. Grant officially formed the Federal Vampire and Zombie Agency.

But alas, the FVZA was shut down in 1975 — prematurely, it turns out. Americans must now defend themselves against the undead, leading to this considered discussion of the best weapon for the job:

The SKS is certainly the least expensive way to arm yourself for the zombie apocalypse. You can still get them for as little as $150 at gun shows or wholesale. I’ve spent enough time with my SKS to confidently say that it will shoot minute-of-zombie-head out to 150 yards. I usually get 3 inch groups at 100 yards.

Are you prepared? Don’t wait until you’re trapped on a mall roof with your pants down.

The Federal Vampire and Zombie Agency

If you seriously want to take out zombies and vampires, all you need is a can of gasoline and a Zippo.

At night, it also provides entertainment for the kids.

This sounds so Hodgeman. Just substitute “Hobo” for “Zombie.” But that makes it good.

What really sucks is zombies like fresh brains. Ain’t gonna find many in the “Real” US America.

@blogenfreude: Well, they could always snack on the foreign students at Auburn first.

@nabisco: They can snack on all of the foreign and the homegrown students at Auburn if that helps the Snorg Tees girl make her getaway. God I am getting maudlin in my old age!