Stinque
Home Latest Comments Log in
If it smells, we’re on it.
Stinque
Assholes, they do vex us.
About Fucking Time 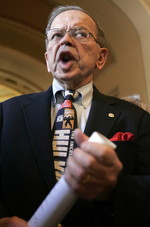 The first public poll of Alaska conducted entirely after GOP Sen. Ted Stevens was convicted on all counts in his corruption trial shows a probable Democratic pickup in this deep-red state — but Stevens is doing surprisingly well for a newly-minted convicted felon.

Call me a bad person, but this is fun.

The new numbers from Rasmussen: Dem candidate Mark Begich 52%, Stevens 44%, with a ±4.5% margin of error. Three weeks ago, Uncle Ted had taken a 49%-48% edge over Begich. So apparently getting convicted of a felony a week before the election can be quantified as taking five points off of a candidate’s poll numbers.

More after the jump.

Even the Talibunny (and, presumably, Joe the Plumber) wants him gone.

And those Republican leaders aren’t the only ones calling for Stevens’ resignation. The poll also shows that 52% of likely votes want Stevens to resign — the same percentage as those who say they’re voting for Begich.

The only thing that could make this better would be Liddy Dole getting knocked off.

What about Supreme Sack of Shit Saxby Chambliss?

I’d like to see him get pummeled by a bunch of veterans.

Ted Stevens is such a crotchety old man, I can’t take it. It’d be laughable if he didn’t STILL AHVE 44 PERCENT. WTF?? Who is still going to vote for him? WHO ARE THESE FUCKING PEOPLE??

A quick check on electoral-vote.com showed a couple of things.
If GA and KT senate races both tip for Demrats (and everything else remains the same) then the Demrats have their 60 seat uber majority + they can heave Joe Lie out without losing a step.

How depressing. Who are these 44%ers?

What kind of dumbfucks are answering phones up there? Oh wait. The same ones who voted for Caribou Barbie. Maybe a little global warming will help thaw out some cerebral cortexes up there. Shit!

@ManchuCandidate: Stats like that make me want to touch myself.

They are the same people who would vote for his Rebublican corpse after he had a massive stroke. Because, well, Republican, right?

It will be very close either way in GA and KT as the last polls I checked were within the margin of error.

@ManchuCandidate: I must confess, he is the hottest nerd right now. I love him ten hundred times. But, I love nerds in general, so he’s totally on my radar anyway.

Do you think he is getting all kinds of laid from his wonk fame? I really, really hope so.

His stats are my antidote to Drudge, who might send me over the edge with his contrary, petty, prurient ways.

@ManchuCandidate: I would love to see him beaten like a rented mule.

@ManchuCandidate: It’s KY (like the jelly). And yes, Nate is a total SILF.

Would somebody please watch the video and tell me whether it’s a parody? I can’t get video at this jobsite.

@blogenfreude: No – it is real. But it is just Wolf Blitzer reading what Talibunny apparently told an ABC reporter, but they obviously can’t play the tape.

@homofascist: She didn’t even wait until after the election to knife him in the back. This is good fun.

Shorter Sarah Palin: “I come to bury John McCain, not to praise him.”

Now THAT is a skillful politician. Kitty Harris league even.

@Tommmcatt Yet Again: I would laugh, but that very thing happened with a machine democrat here in Chicago and his dumbass supporters about, oh, two years ago. Plus, he eventually “appointed” his son to the post (though he was never seen or heard from publicly after the stroke), and they let him have the spot (after another machine-driven vote, obvs). Junior’s been fucking up the county board since.
http://en.wikipedia.org/wiki/John_Stroger
(scroll down to 2006 election section)

@blogenfreude: Oh man. I hope Geezer fucking buries her ass so hard after this thing is over that she won’t be able to see Anchorage from her house. Ungrateful little bitch.

@blogenfreude: I came not to play McCain’s second fiddle, but to set it aflame and shove it down his throat.

I can see it. Talibunny will campaign with two co-vice presidents like a Madonna stage show. Bobby Jindal and Joe the Plumber.

Knife him, Talibunny! Kill! Kill! Bwahahahahahahaha. This is too good to be true!

@Tommmcatt Yet Again: Where is our Miss Kitty these days? You’d think she’d be out stumpin’ for the Talibunny.

@Jamie Sommers: Oh no … she must head the ticket in 2012. Barry will beat the living snot out of her.

@Jamie Sommers: I think her future depends on how much the old skool GOP puts their foot down. I think they realize now how scheevy it was to be in bed with the Christian wingnutters this whole time, and they’re at a critical moment. Either they’re going to send her packing, apologize profusely to John McCain and go about getting Kay Bailey Hutchinson on board for 2012; or they’re going to get all flustered and seduced by the shiny metal object that was the Talibunny, and hang onto the last shred of the base they have, which is the wingnutters.

Honestly, if “they” were smart, “they” would make a third party and RUN WITH IT. It would be the dems, the GOP and the WINGNUTS.

She’s wandering the public halls of the House, still dressed in that red power suit, cobwebs in her hair like Miss Haversham.

“…And could I look upon her without compassion, seeing her punishment in the ruin she was, in her profound unfitness for this earth on which she was placed, in the vanity of sorrow which had become a master mania, like the vanity of penitence, the vanity of remorse, the vanity of unworthiness, and other monstrous vanities that have been curses in this world?”

Oh, that sounds like a prayer to me…Please, oh, please, let them form a wingnut party. We could convince them go back to our historical roots and use a turkey as their national symbol.

@ManchuCandidate: The sack of shit is having his Neal Boortz loving cronies go on about how much he’s a great tax cutter and supports the Fair Tax — the number one obsession of straight white men over 40 down in these parts. And also how Jim Martin is a raging liberal, and will raise your taxes.

Martin and the DSCC are countering with commercials about how that 23% “fair” sales tax would cause the cost of everything to go up.

We’re lucky thus far not to have similar attacks against Martin, another Vietnam vet, morphing him into Osama bin Laden, or attacks similar to what Kay Hagan is facing in North Carolina. Nor are there any gay-baiting ads either.

What it all boils down to now is a heavy African-American turn out along with moderate women of all types, as well as the assorted urban white liberals.

Saxby got on the radio the other day and insinuated that Jim Martin was not from the “real Georgia” because he and his supporters lived in Atlanta. You know what? I’m ready for the city to secede from you ignant motherfuckers.

@Tommmcatt Yet Again: I was thinking more like Blanche DuBois, but we’re on the same wavelength. I totally see her dropping her hankie in front of Barney Frank, not realizing he’s playing for the other team.

“Pray with me, Barney! Pray that God will change your heart! Nonono, I’ll get on MY knees, you stay standing….”

@blogenfreude: I hear that’s been her M.O. in Alaska politics. McDiapers thinks he’s getting himself a hot chick, and winds up in an alley without his wallet.

@Dodgerblue: Her MO seems to have been to seize every possible opportunity for self-aggrandizement, and to fuck over anyone and everyone who gets in her way, regardless of whether they were the ones who got her where she is. She seems to have blundered upwards because people thought they could use her glamour, and didn’t realize she was a complete fucking sociopathic snake who has no loyalty to anyone or anything, and the truth least of all.

I said it before, she is never gonna be able to lead anything. She is a political retard. No way on earth she will ever be able to create an organized base of support, she just don’t know how to play the game. She will never top a ticket in US politics, she’s living in a fantasy world, right now, even the people who thrust her up way above her head to where she is now are all hating her, and they are all gonna spend the next years makining sure she never goes anywhere.

There’s a difference between public popularity and organized political support. She has popularity among a dimwitted segment of the population, but she is fucking clueless and temperamentally incapable of beginning to understand the working of real politics, of building organnized and loyal networks of support among real , consequential people, as opposed to mouth-breathing racist pigfuckers.

She’s nothing, nothing, a flash in the pan who will go down as history as the scapegoat, desrevedly, for McCain’s loss. She may well wind up the poster child for why the sane republicans wake up and realize that the fundie nuts can no longer help them and in fact are dragging them down.

@Promnight: I’m hoping she will destroy the Repub party by causing a schism between the fundie crazies and the Wall Street business type Repubs. That would make the Goldwater/Rockefeller tiff seem quaint by comparison.

@Dodgerblue:
That libertarian/Pentecostal rift in the GOP has been brewing for 30 years, and it can’t come a moment too soon. The Wall Street bidness types made a deal with the Devil (so to speak) and the chickens are coming home to roost. Can I haz mixed metaphors?

I realized how close the rift is when I was on a layover in Phoenix last week and listened to two middle aged white small-bizness owning type couples bitch about Bush and McCain and talk about how they can’t stand the mouthbreathing Jeebus freaks. I tried to maintain a modicum of self-control when one of the women, who confessed to voting for Bush, said that she was so disgusted by Sarah Palin’s stance on abortion and Talibunny’s general idiocy that she was insulted as a former Goldwater girl as to how her Republican party had been destroyed by “born again morons from the trailer park” that she was going to vote for and had given money to Obama and that she only wished that McCain was up for reelection for his Senate seat this year so she could vote against him because “he has never done jackshit for Arizona.”

Jesus Hussein Christ, I chuckled to myself as I lined up for my Southwest flight, the Unicorn is maybe going to pull this off. Circles within circles, grasshopper.

And Roger Cohen haz hope ™ which also got me excited

@SanFranLefty: Goldwater was guilty of many things, but being a religious nut wasn’t one of them. IIRC he also came around on the gay issue near the end of his life.