Not Even Stinky Finger for Psychogeezer on The Bus; Pouts & Shuns Talibunny 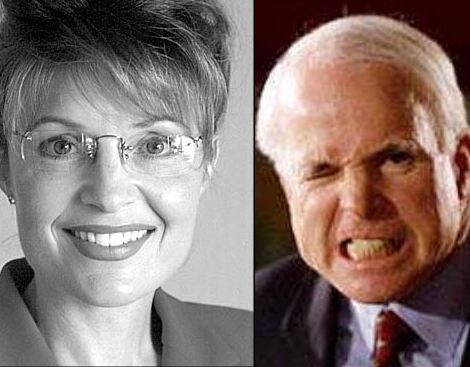 Talibunny and Psychogeezer no longer even holding hands on the bus. Silly Psychogeezer, you think she gave a shit about your alleged politics, you stupid fucking twit?

At least that is the way the story was relayed to him but who really knows? The Talibunny may have reorganized her alliances around any number of future scenarios and lined up Psychogeezer stalwarts for her 2012 campaign and begun alienating everyone who didn’t prove apparently useful for her plans, in good auld Talibunny style. Here’s Draper’s tale:

I’ve heard from one well-placed source that McCain has snubbed her on one long bus ride aboard the Straight Talk Express, to the embarrassment of those sitting nearby. It has surely been implied to the governor that she should be eternally grateful to have been plucked from obscurity.

The Talibunny has made it abundantly clear she wants to rip the old man’s heart out and eat it in front of him and then go and lead the Adkisson Brigades herself, finding her true calling as a fascist instigator and leader of the desperate, impoverished insane legions of halfwits who’ve bought the line that conservatism really means constructing a hyper-militarized theocratic kleptocracy thatSW bankrupts America before driving it into apocalyptic war.

Things began going sour on the Straight Talk Express early on in the relationship. During the Summer, they’d hold hands. Kiss when the sun went down and, in the dead of night, the Talibunny would give Psychogeezer stinky finger but refused his feeble attempts to push her head into his lap. The Psychogeezer was patient, believing Talibunny  would finally show her gratitude with a resplendent blow job before the campaign ended and that glow of appreciation would enhance his manly mien and his appeal to voters, beguiled by his vigor.

Then, on a long stretch of road between Aurora, Missouri and Great Bend, Kansas, the Psychogeezer awoke in the pre-dawn hours, startled by the sounds of grunting. Across the aisle, campaign manager Rick Davis was sprawled across two seats with his pants around his knees, his can of Keystone Light spilled beneath his seat. Talibunny was kneeling in the aisle, savagely gobbling his schlong. Psychogeezer pretended to sleep, wept in silence and stifled his rage.

Psychogeezer bit his tongue in the days after when Davis would talk about Talibunny’s glowing future to the press corps on the bus. The Talibunny would play the eager political ingenue, offering up a dismissive, self-effacing chuckle and a beaming smile to Davis now, Psychogeezer thought, already planning the Talibunny’s 2012 run.

I paid for the fucking bus, Psychogeezer would think, I didn’t even get head and now she’s auditioning her 2012 campaign staff on my nickel. Despairing, Psychogeezer would retire with his Readers Digest and Parodi to the bus shitter where the ghost of Barry Goldwater lurked in the toilet.

Goldwater told him one recent morning on the Straight Talk Express, startling him from reading the ‘Laughter is the Best Medicine’ column, “You know, you were always a childish dolt, but the Talibunny takes the cake. I wouldn’t fuck that fascist whack job with your dick much less let her run around on my dime representing any of her ravings as ‘conservatism,’ you pathetic twit.”

If they do indeed get elected (my Magic 8 Ball points to no, but you never know with electoral antics), PG better have a food taster, because she’ll be trying to poison him every chance she gets. I nominate Cindy, because she’s probably had so many toxins in her system that her body’s immune.

The Talibunny camp is armed full time – because it’s always moose season when you own the state, right? The Secret Service will have to worry about ‘accidental’ discharges of fire arms at the White House.

@FlyingChainSaw: Perhaps she’ll follow the example of Sherlock Holmes (Her: “Who?” Us: “Nevermind.”) and inscribe patriotic slogans into the wall of her study crafting room with a pistol.

@rptrcub: But if she’s immune, how will we know that she’s ingested poison? Better give that job to Meghan so that her Columbia degree isn’t a complete waste.

The moment of clarity is almost here.

@chicago bureau: I know dude, I almost passed out when I saw electoral-vote’s FLAMING PINK Arizona.

Re Talibunny, it reminds me so much of Eva Peron’s ascension to power – all she needed was to get someone to give her a ride from the backwater town she lived in to the bright lights and big city of Buenos Aires; she bulldozed her way from there.

She will not go quietly into the night, me thinks.

I just saw Rachel Maddow for the first time! How cute is she? Love her! Did they trade her out of Bristol, CT? She’s got a kicky SportsCenter vibe about her.
/TJ

I know it’s not right to count the chickens and such, but at this rate —

Please, oh, please let Caribou Barbie run against Black Eagle in another four years. Good Lord, it may not even be close.

@RomeGirl: For her, the Adkisson Brigades will eagerly fight to the death. She’s ready and eager to test and collect on their loyalty.

@Signal to Noise: It’s not over until the last Sieg Heils are shouted from the gallows and the last Adkisson Brigade is driven into the sea.

@rptrcub: I am still totally ape-shit terrified that the slim margin in those battleground states can erode with the simplest of false flag maneuvers from Cheney & co.

If this dysfunctional pair is “so blessed” (aak!), we are deeply deeply fucked. I will not breathe easily until I hear PG’s concession.

@nabisco: I won’t breathe easy until President Obama straps Cheney to a gurney and injects him with a half-litre of potassium chloride and the neocons are safe in a concentration camp in Kansas.

@FlyingChainSaw: honestly, that’s an election fight I’d love to have in four years. Leave them reeling next week, send them to the bottom of the ocean in 2012.

Do us a world of good.

@FlyingChainSaw: Have you read Angler by Barton Gellman of the Post? Cheney had the whole unitary executive thing whiteboarded out before he even selected himself for VEEP. That dude is nothing if not smart, he’ll swallow a rifle or rip out his own pacemaker before letting himself get caught.

@Signal to Noise: Can you imagine the two of them in a debate? CAN YOU IMAGINE? I never thought I’d be looking forward to 2012.

@RomeGirl: Straight outta Oxford, yo. Keith Olberman (who with Dan Patrick, basically invented modern sportscasting on SportsCenter about 15 years ago) was her patron at MSNBC.

I lay awake last night alternately worrying about election shenanigans that will snatch defeat from the jaws of victory and about whether there are enough secret service agents in the world to keep Barry and his family safe. I was in tears thinking about it. I’m lighting candles to everyone I can think of starting today.

@Mistress Cynica: @FlyingChainSaw: @nabisco: Here in elitist, non-real Georgia, up in my ivory tower, we’re most all naturally liberals (my peeps are those wonderful reality-based scientists who, like, you know, assert stuff based on empirical data instead of Jesus).

In conversations I’ve had, they are, as I am, sweating this next week. I know that Yoda Pez can try to calm us down, but I would hate to get all complacent.

They also worry about money for scientific research, especially after 8 years of the retard in chief. In the past, the world’s brightest came here. Now, they’re leaving the U.S. to pursue research elsewhere. If there’s a lag thanks to the economy or Talibunny, even if there’s a restoration of funding within a few months or a year after it’s cut off, it will take decades to get labs up and running again to make those wonderful new discoveries, like perhaps better drugs for cancer and AIDS. Thanks for damaging progress, W.

@rptrcub:
I know. It isn’t widely mentioned, but we apparently have many furrins and expats coming home.

@rptrcub: A close friend is a microbiologist at U of Mississippi med school. He has trouble getting funding because they lack the infrastructure needed, e.g. he has to drive to Birmingham to use an electron microscope. As an Aussie, he’s seriously looking at Canada.

@Mistress Cynica: Yep. And a young investigator/cancer researcher I talked to today — who just got her lab to where it needs to be, after FOUR years, which it often takes — is really scared she’s going to lose all funding and wind up having to do something else. Speaking of B’ham, she did her postdoc at UAB, btw.

The motto of the W legacy: America — Dumber. Weaker. Poorer.

@redmanlaw: Gotcha. It shows. I now love her and am trying to fight the urge to watch her on YouTube all night.

@rptrcub: Empirical…what? Obama wants to be an emperor? I don’t get how you libbrul elitist muslins talk, but that shit don’ soun’ right to me.

I, on the other hand, had a dream in which Obama took the election in a landslide, with 90% of the electorate voting for him.

I’m knocking on wood as I type this, by the way.

@chicago bureau: What strikes me as hilarious about that is that Black Eagle has been sending Janet all over the country to build up support in other states like Indiana when he could have been using her to GOTV in the Geezer’s own backyard.

@redmanlaw: Does that make him the patron saint of snark? If not, who is?

Oh and did anyone see Sherman Alexie on TCR last night? Fuckin’ hilarious!

Oh fuck it. I hate dumb people. I can’t even make fun of them anymore, I just hate them. I am dumbist. Smartist? Brainist? What’s the word for a person who discriminates against PEOPLE WHO ARE AS DUMB AS FUCKING STONES?

@Jamie Sommers: Jim Rome is smack/snark; while KO is noted for his arch sports commentary.

I did catch Sherman. Where was Mr. Peabody?

@redmanlaw: Exactly. False advertising on Colbert’s part. There was no bespect’d dog anywhere to be seen.

@Tommmcatt Yet Again: That was made of pure awesome.

@Tommmcatt Yet Again: Actually, I meant cord they cut off when your baby is born.