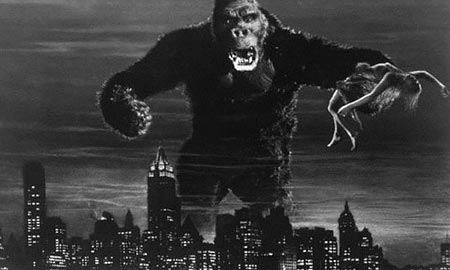 Shocking news from the paper of record:

On Sunday night, [Sarah Palin] twice took questions from reporters, the first time on an airport tarmac without her press staff’s knowledge.

You can imagine the chaos that ensued, but we’ll spare you the trouble: an operative barking “Get Tracey” into his headset, handler Tracey Schmitt rushing to the scene of the outbreak to contain the beast, shouts of “Thank you!” in a vain attempt to prevent further answers from contaminating the campaign.

Reports of dart guns, weighted nets and biplanes are unconfirmed. McCain spokesdouche Tucker Bounds later denied the incident, saying it’s unproven that Palin is even capable of speaking in her own words.

Palin Breaking Out of Cocoon [NYT]

B) Sister Glossolalia believes she actually can put together a coherent sentence.

D) She was at a Cold Stone Creamery — whose founders have given to the side aiming to ban gay marriage in Arizona. So she felt right at home. (When Joe.My.God. revealed this, their PR people went into maddening overdrive to try to keep gay dollars a’flowin’.)

The biplane is so as a matter of choice, the campaign said in a statement. “God doesn’t make mistakes,” said spokeswoman Dodo Y. Platypus.

As they say in Texas, She’s about as smart as a box of rocks.

@JNOV: Bag of hammers. She is, I think, the living exemplar of a fuckwit. She’s totally and deludedly convinced that her “charm” and “hotness” can conquer all, and maybe it can in Alaskastan. Or maybe its just that its been enough for her, small town homecoming queen type, just high-school writ large for her, her whole life.